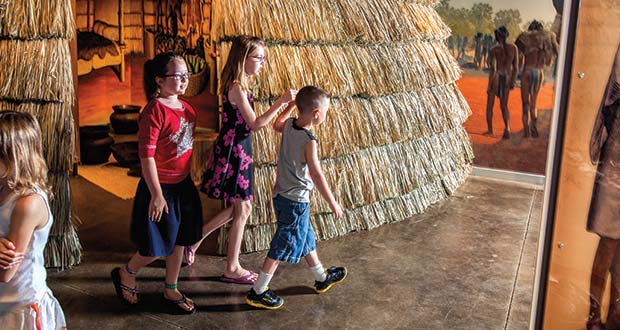 The Caddo Indians were among the first Texans, moving into the Neches Valley about 1,200 years ago. For nearly a millennium, until the arrival of Europeans, they dominated life in East Texas; for the first half of that time, they occupied a terrace above the Neches River. And when the Caddo vacated the village, they left behind three ceremonial mounds that tell us much of what we know about prehistoric times in East Texas. They also inspired the name of our state.

Caddo Mounds State Historic Site covers nearly 400 acres on either side of Texas 21, about 26 miles west of Nacogdoches, near the edge of Davy Crockett National Forest. Archeologists from the University of Texas at Austin conducted the first formal excavations at the 94-acre village site from 1939 to 1941. The state acquired parcels of the property over the years, opening it to the public in 1982. Now managed by the Texas Historical Commission, the site offers walking trails around the mounds, and with the recent renovation and expansion of its visitor center, interprets the life and times of the Caddo who settled the ancient village.

“The interpretations are aimed toward culture, foodways, religion, and so forth,” explains Tony Souther, the site manager. “We have an actual thatched Caddo house in the corner of the museum, which you can walk into. We have a ceremonial structure. You can pick up bows and arrows; you can play the drums and rattles. It gives you the feeling that you’re actually walking into a Caddo village or farmstead.”

Before the Caddo arrived, the East Texas region was home to small groups of nomadic hunters and gatherers. About A.D. 800, a group of Caddo created a permanent community on this alluvial plain near the Neches, introducing the mound-building traditions and agricultural practices already found throughout much of the present-day South and Midwest. Caddo Mounds was in the southwestern portion of Caddo tribal territory, which also encompassed southeastern Oklahoma, southwestern Arkansas, and northwestern Louisiana.

The Caddo were skilled farmers and grew corn, beans, squash, pumpkins, amaranth, and sunflowers in the rich, sandy soil. Nuts, berries, persimmons, and other edibles grew wild in the woods, which also harbored game such as deer, bear, turkey, and rabbit. The Neches River provided fish, and Caddo hunting parties traveled west to the Southern Plains to harvest bison.They dried the meat to preserve it for the long trip home and saved the bones for tools and hides for blankets. Their preferred game, white-tailed deer, also provided material for clothing, tools, bowstrings, and shields; bears yielded cooking fat and skins for bedding. The wood of the bois d’arc tree, a native of the region, was ideal for making bows and contributed to Caddo Mounds’ reputation as a major regional trade center with ties as far away as Florida and the Great Lakes.

The Caddo people were also known for their pottery, which tribal members would make from river clay mixed with materials such as crushed pottery, bones, and shells. These days, Chase Kahwinhut Earles, a Caddo member from Ada, Oklahoma, makes pottery using the tribe’s traditional methods, including hand-coiling clay, burnishing the clay with a rock, hand-carving the designs, and firing the vessels over an open fire. Earles says that Caddo pottery is distinguished from the pottery of other American Indians by its multitude of designs, such as spirals and interlocking scrolls, and shapes, such as tripod pots.

The historic site’s visitor center displays Caddo pottery and other artifacts from the site, including clay pipes shaped like humans and a stone staff known as a “spatulated celt” that would have been a status symbol for a tribal ruler. The visitor center also displays artifacts that represent the trade reach of the Caddo, such as ear spools covered in thin sheets of copper (copper likely from the Wisconsin area) and seashells.

From the visitor center, a seven-tenths-mile loop trail made of crushed granite takes sightseers to the Burial Mound and the Low Platform Mound, which look like 20- to 30-foot-tall grassy hills and have retained some of their original flat-topped pyramid shape. Interpretive signage offers insight into the mounds, including a third mound, the High Temple Mound, which is located across the highway. The temple mound is closed to visitors but is clearly visible from a distance.

Based on the location of certain artifacts around the site, archeologists believe the Caddo divided the village into two areas. Near the mounds, the ruling elite of political and spiritual leaders lived and performed their ceremonial functions on and around the High Temple and Low Platform mounds. The rest of the population lived among farming plots in the extended village. The population of the village at its peak (A.D. 1000-1300) is unknown, though archeologists have identified remnants of at least 140 of the Caddo’s beehive-shaped, thatch-covered wood houses.

Excavations of the three mounds have led archeologists to believe that the Caddo built them in stages over hundreds of years. The High Temple Mound was likely the spiritual and political center of the village, and the tribe would have built its important structures on the mound. For ceremonial reasons, the Caddo would occasionally burn the structures, cover the charred remains with fresh dirt, and then build new structures on top of the mound. Ultimately, the mound grew to 35 feet tall.

Archeologists believe that the tribe interred the bodies of prominent members of the ruling elite in the Burial Mound. Over time, the mound grew to 20 feet in height and 90 feet in diameter. A partial excavation of the mound has indicated that it may contain as many as 90 bodies. Just west of the Low Platform Mound, an offshoot of the hiking trail takes visitors to a deck overlooking a grassy depression that was once a borrow pit, where villagers dug fresh dirt to add to the mounds.

On the northern end of the historic site, a depression cuts across the edge of the plateau as it drops to a lower field, marking the site of an ancient Indian trade trail that the Spanish later adopted as part of El Camino Real de los Tejas, their overland route from Mexico to northwest Louisiana. (The historic site plans to open a trail to view the trail ruts by the end of the year.) The Caddo established trade with the Europeans, who began entering the area late in the 17th Century. By the time Spain won control of the region, Spaniards referred to the natives as “tejas,” the Caddo word for “friend,” and from that came the state’s name of Texas.

Most archeologists believe the Caddo abandoned the site’s ceremonial center around A.D. 1300. The reasons for their departure aren’t certain; possible factors were a drying climate that made the site less productive for raising corn, and declining trade clout as other groups in the region became more self-sufficient. Regional Caddo communities absorbed the Caddo Mounds people over the next half-millennium, but eventually the natives faced increasing pressure from Anglo settlers. After Texas won independence from Mexico in 1836, Americans moving into the area pushed the Caddo out. The U.S. government eventually moved the tribe to Oklahoma. The Caddo established a tribal center at Binger, Oklahoma, in 1938, and since then, the Caddo Nation of Oklahoma has grown to more than 5,000 members.

Earles, the Caddo potter, visited Caddo Mounds State Historic Site in April for the site’s annual Caddo Culture Day. He says he was impressed with the preservation and care of the site. “Our connection to the site is an old one,” Earles says. “We don’t practice the same mound building we used to, but we hold it in our hearts. One thing we’re very sensitive to is a lot of times the mounds were a place of burial, so the Caddos regard the mounds the same way others regard cemeteries. And they were also a place where our ancient ancestors practiced our religion, and so in that sense it’s sacred ground to our members who came before us and today.”