Nederland Pays Tribute to Its Dutch and Cajun Ancestry 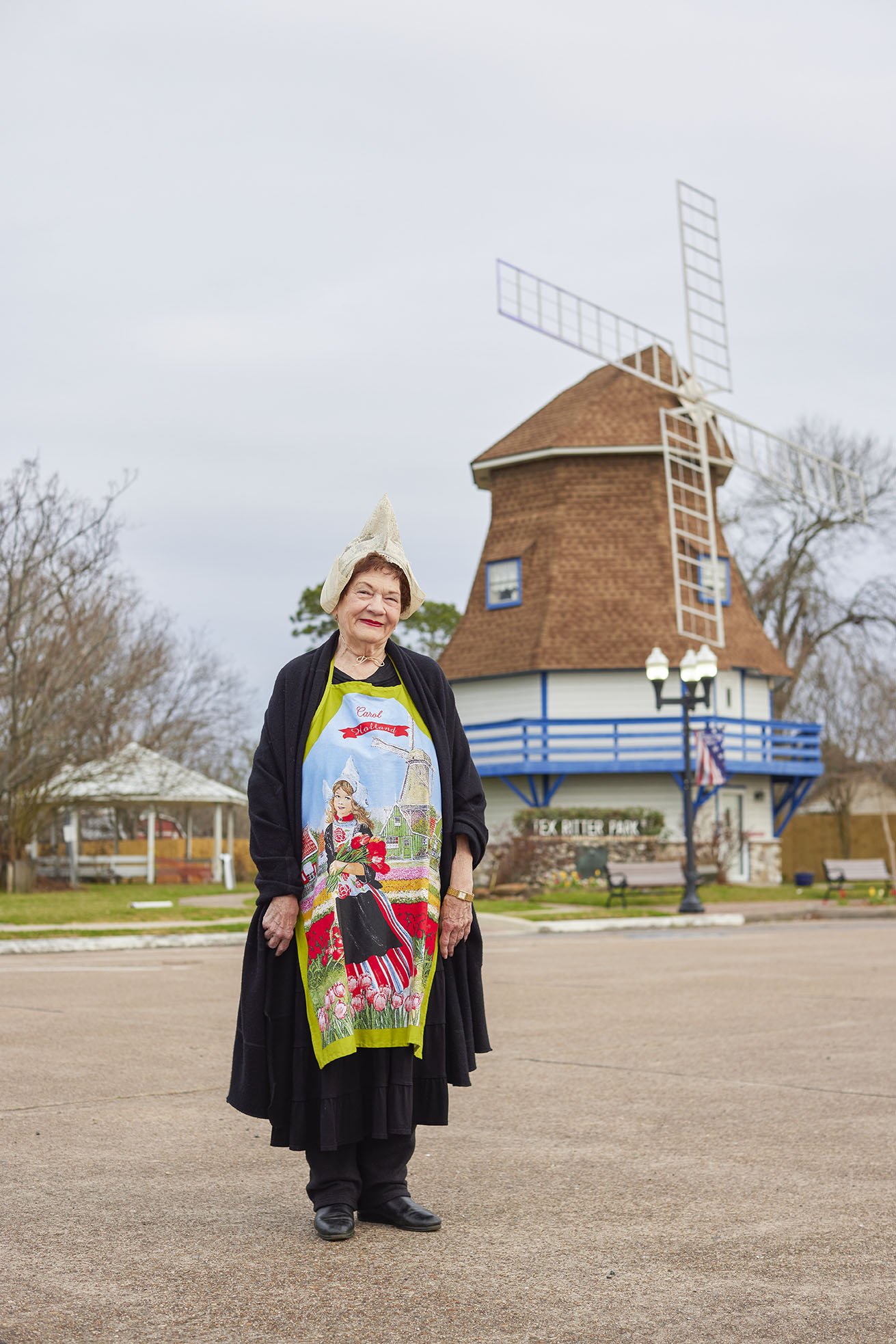 Carol Culp, wearing a traditional Dutch bonnet, is the curator of the Dutch Windmill Museum. Set in a replica historical windmill, the museum interprets Nederland's history and honors the town's early settlers. Photo by Nathan Lindstrom
The swath of land between Beaumont, Port Arthur, and Orange became known as “the Golden Triangle” after the 1901 discovery of oil at Spindletop created an influx of wealth. These days, visitors might assume the nickname comes from the port and refinery lights that glitter at night along Sabine Lake and the Neches River. But amid the industrial activity, there are glimmers of the area’s agricultural past. In the town of Nederland, wedged between Beaumont and Port Arthur, the Dutch Windmill Museum, constructed in 1969 to look like one of Holland’s traditional windmills, pays tribute to the Dutch settlers who established rice and dairy farms here in the late 19th century. Their history is often retold by Carol Culp, the curator of the museum for the last six years. A native of neighboring Port Arthur, Culp moved to Nederland in 1965 to raise her family.

“Arthur E. Stilwell was an entrepreneur who built many towns, including Port Arthur, which he named after himself, and Neder-land. He had a land company, but he needed someone to promote it. He became friends with a Dutchman named Jan de Goeijen, who was instrumental in getting investors from Holland. Stilwell promoted the land by showing pictures of Florida with palm trees and flowers and said that it was a fertile place where anything would grow. He called the town Nederland, which means Netherlands, and built the Orange Hotel. Of course, Stilwell’s main goal was to sell land. Sorry to say, that hotel is now gone.”

“About 100 Hollanders came over on three boats starting in 1898. The museum has a trunk from one of the boats. The trunk is marked with the person’s name, the name of the boat, and the word ‘Galveston’ because they came through Galveston. When the Hollanders got here, there was nothing but mud and mosquitoes. Some of them didn’t like it, so they went back. But the real pioneers stayed. They had to start from nothing. They started rice farming and dairy farming.”

“In 1901 Spindletop happened in Beaumont, and all kinds of people came, including the Acadians. We call them Cajuns. They needed work and had heard about the jobs here. The Hollanders were the ones who had built the town, but they needed workers. The Hollanders were stoic and serious, and the Cajuns were loud and boisterous—totally opposite. But the two cultures merged and helped one another. La Maison des Acadiennes is next door to the Dutch Windmill Museum. It’s a replica of an Acadian house, showing what life was like 120 years ago.”

“The two museums are located in Tex Ritter Park. Tex Ritter was a famous country and western actor and singer in the time of Roy Rogers. The Dutch Windmill Museum has some of his records and also a suit that he performed in. He was the most famous person to come out of Nederland in his era. Another was Buddy Davis. Buddy had gotten polio as a child, and they thought he would never walk again. But he grew to be 6 feet, 8 inches tall and won the gold medal for the high jump in the 1952 Olympics. We have the bar that he used in that high jump.”

“There are several Cajun restaurants here, but my favorite restaurant is The Schooner. It’s been here since 1947. It has awesome seafood—the broiled red snapper is my favorite. They also have wonderful steaks and hamburgers.”

“Boston Avenue is the original main street. It has a lot of little boutiques. Down the street, over the railroad track, is Setzer’s, which is a local landmark. It’s been here a long time [since 1912]. At one time, it was used for rice storage by one of the early Dutch families. Later, it was a feed store. Now it’s a hardware store, and they have knickknacks and gifts. It’s really a neat, old-timey place. You can go anywhere in Nederland in 5 minutes. It’s calm here; it’s a good place to raise a family.”