Historic vessels repurposed at The Knife Shop in Lufkin

Written by Art Williams, Photographs by Kevin Stillman | From the May 2016 issue | Updated: October 28, 2018 | Filed Under: Culturemade in texas 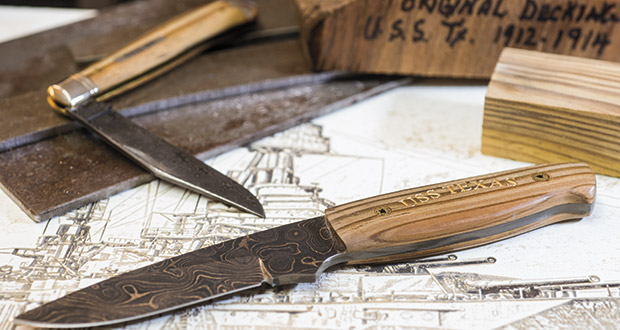 A long the Texas Gulf Coast, a series of decommissioned ships navigate the nation’s maritime history. In Galveston, the 1877 tall ship Elissa recalls the waning days of international sailing ship commerce while the submarine USS Cavalla chronicles the deep-sea battlegrounds of World War II and the Cold War. In La Porte and Corpus Christi, respectively, the imposing Battleship Texas and aircraft carrier USS Lexington reflect the American Naval might of the 20th-Century world wars.

The ship knives cost $395 for folding knives and start at $600 for straight knives. Richardson donates $50 each for the first 100 sold of each series back to the ship, and then $100 for each additional knife sold.

As floating museums, these ships offer a rare educational experience, but they also face difficult maintenance problems—metal corrosion and wood rot are common; upkeep is constant and expensive. Recognizing an innovative opportunity to help, the Lufkin-based knife maker Percy Richardson has created a series of knives using metal and wood discarded from these vessels during renovations to raise funds for their support. In 2014, Richardson, working with his wife Lynne and sons Rich and Aaron, launched the America’s Fighting Ships Knives series with a signature knife for the Texas. They followed it up in 2015 with knives for the Lexington, Cavalla, and Elissa.

“He’s taken scrap and has made something artistic out of it,” says Andy Smith, ship manager of the Texas. “The knives are jaw-droppingly gorgeous and wildly popular. When you hold it in your hand, the craftsmanship is amazing, but also you think about how that piece of metal has been around the world and fought in two world wars. It’s like owning a piece of history.”

A native of Hemphill, Richardson taught himself how to make jewelry before turning to knife making in 1989. What started as a hobby soon led to custom orders from hunters, and he opened his own shop in 1991. “I’m just a self-taught country boy,” Richardson professes. But he’s also a perfectionist with an eye for detail. His artistry is evident in the smooth, carved handles and precisely shaped blades of his straight knives, which he makes in his shop in Lufkin, The Knife Shop. Because of the demand for the ship series’ folding knives, Richardson outsources their fabrication to Great Eastern Cutlery in Pennsylvania, which helps him keep up with production volumes. The ship knives now make up about 60 percent of his business.

Richardson’s workroom at the back of his shop is full of saws, sanders, and raw materials. File cabinets hold such exotic items as a whale’s tooth and the tusks of warthogs and walruses, to be fashioned into handles. One drawer contains, among other things, a wooden block labeled “TX 1912–14”; it’s a piece of the Texas’ original teak decking before it was replaced with pine (Richardson has some of that pine on hand, too).

He also has teak—for centuries a prized boatbuilding wood because of its durability and natural resistance to rot—from the decks of the Lexington and Cavalla, and from the 1877 captain’s quarters of the Elissa. Richardson carves these wood blocks into knife handles and uses reclaimed metal for their blades. Texas’ metal comes from an engine brace; the Cavalla’s from a bulkhead; the Lexington’s from anchor chain; and the Elissa’s from the hull.

“There are lots of knife makers that make collectible knives, but these are the most historical,” Richardson asserts. They’re exclusive as well, because Richardson has 10-year contracts with the ships for rights to use salvaged material for knives. 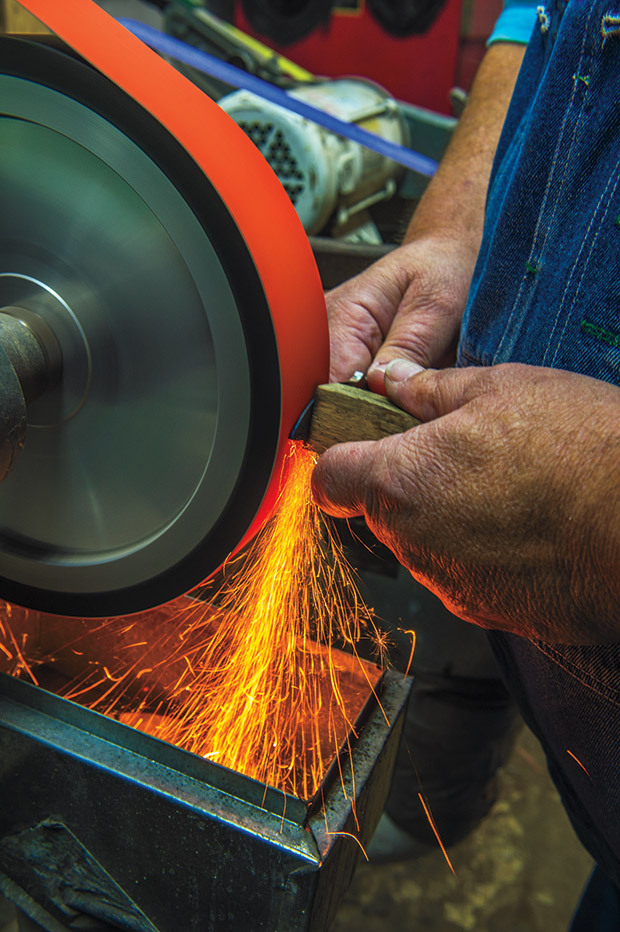 The recycled ship metal is usually too soft to be used for cutlery, so Richardson first sends the material to Devin Thomas of Panaca, Nevada, a knife maker and expert producer of Damascus steel. Thomas combines the salvaged ship metal with a harder grade of steel in a process that strengthens the metal and adorns the surface with decorative patterns reminiscent of wood grain, flowing water, or fingerprints.

At The Knife Shop, stacks of Damascus steel billets—thick sheets of metal that measure about 5-by-18 inches—rest on a worktable. Richardson selects a different blade pattern for each annual series; the 2014 Texas knife blades had a raindrop pattern, while the Lexington, Cavalla, and Elissa blades have a ladder pattern. For the Elissa, the only merchant ship in the series, he also varied the shape of the blade, producing a blunt-tipped rigging knife, typical of those used on sailing vessels.

Richardson ensures that all of the elements of his knives are produced in the United States. Even their walnut-and-oak display cases are handmade in the town of Oakwood, by Meadows Display Cases. In his shop, Richardson spends about eight hours on each straight knife, first shaping the blade using a band saw and belt grinder, and then carving the handle using a drill press and sander.

For each ship, Richardson initially produces about 100 folding knives and between 10 and 20 straight knives, with additional straight knives available on demand. The folding knives cost $395 and can be shipped overnight; the straight knives start at $600 and can take two weeks to a few months to complete, depending on customization. The larger Bowie knives, measuring about a foot in length, start at $1,000. Richardson sells the knives at his shop and by phone order. The Lexington and Elissa knives are also available in the gift shops on those ships.

Richardson donates a portion of the sales price back to the ships: $50 each for the first 100 sold of each series, and then $100 for each additional knife sold. Also, Richardson says he often donates additional knives for auction or raffle, and gives $10 per knife to local Wounded Warrior projects. To date, the initiative has raised more than $20,000 for the Battleship Texas alone, Smith says.

Richardson intends to produce knives for 15 ships in need throughout the United States, with plans to focus on about three new ships every year until 2020. In 2016 he will create knives for Battleship New Jersey in Camden, New Jersey, and the aircraft carriers USS Hornet, in Alameda, California, and USS Nimitz, in Bremerton, Washington. Richardson hopes that his knives will support these ships in their battle to stay afloat for years to come.