Written by: Bobbie Jean Sawyer
Photos by: Will van Overbeek

Written by Art Williams, Photographs by Will van Overbeek | From the November 2016 issue | Updated: October 14, 2016 | Filed Under: Culture 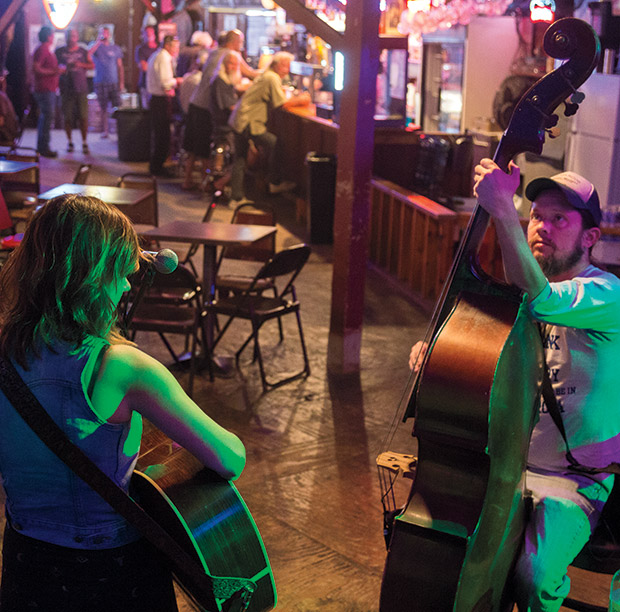 It’s Wednesday evening at Cheatham Street Warehouse. Open guitar cases are scattered throughout the neon-lit barroom, the sign-up sheet for the weekly Songwriters’ Circle has just been posted, and Guy Clark’s voice plays on the overhead speakers.

“I wish I was in Austin at the Chili Parlor Bar, drinking Mad Dog Margaritas and not caring where you are.”

It’s exactly what you’d expect to hear in this unassuming tin-roofed building next to the railroad tracks in the heart of San Marcos. Inside, band stickers and posters plaster the columns, and black-and-white photographs of Willie Nelson and Jerry Jeff Walker playing the Cheatham Street stage line the walls, recalling the redneck-rock heyday of the 1970s. What this former cotton warehouse lacks in frills, it more than makes up for with stellar acoustics and its unwavering dedication to the hard-won lyrics of Texas troubadours past and present. A Texas flag hangs behind the stage, and a large Shiner Beer sign welcomes visitors to Cheatham Street Warehouse: “Home of the Songwriter Circle.”

Songwriting has been Cheatham Street’s heart and soul since the late Kent Finlay, a high-school English teacher and lifelong songwriter, opened the bar in 1974. Finlay was inspired to open Cheatham Street after becoming friends with Hondo Crouch, the mayor of Luckenbach. Crouch’s utopian community of misfit artists and cosmic cowboys appealed to Finlay. After realizing those artists didn’t have a place to perform original songs, Finlay decided to create the Songwriters’ Circle. In 1977, a group of songwriters gathered around a wood stove in the middle of Cheatham Street Warehouse, transforming the rough-and-rowdy honky tonk into a weekly listening room. The venue has hosted a stream of iconic performers, from Townes Van Zandt to Stevie Ray Vaughan, but on Wednesday nights the Cheatham Street stage belongs to anyone with a song.

“I’ve seen him throw people out of here on Wednesday nights for talking,” says Gregg Andrews, Finlay’s friend and lead singer of the country-blues band Doctor G and the Mudcats. “Kent said ‘Come back tomorrow night. You can shoot pool. You can be loud. You can dance and do whatever you want to do. But this night is special and it’s for the songwriters.’”

Kent’s daughter Jenni Finlay, who grew up sleeping on the Cheatham Street pool tables while her parents ran the bar, says that from the beginning her father’s main motivation was to provide a place for songwriters to perform their original material.

Jenni’s book, Kent Finlay, Dreamer: The Musical Legacy Behind Cheatham Street Warehouse (Texas A&M University Press, 2016), serves as a tribute to her father, who passed away in March 2015. The book includes Jenni’s conversations with her father as well as co-author Brian T. Atkinson’s interviews with songwriters who have passed through Cheatham Street Warehouse during its 40 years, including Ray Wylie Hubbard, Joe Ely, Marcia Ball, Hayes Carll, and Randy Rogers.

Jenni, who’s made her own name in the music industry as a promoter and record label owner, says her father devoted his life to mentoring young songwriters. It wasn’t uncommon to find struggling musicians “flop-housing” in her family home. “There were many years of my childhood that we would have songwriters sleeping on the couch,” she recalls. “It was because they needed to have a place where they could develop and study.”

Jenni also remembers watching an unknown singer named George Strait, fresh out of the Army, who had auditioned to be the new lead singer of the hottest country band in San Marcos, the Ace in the Hole Band. “Dad liked George right away. They became fast friends,” she says.

Strait played his first gig at Cheat-ham Street in October 1975. Two years later, Kent took Strait to Nashville to record his first demo tapes. Less than a decade later, the “King of Broken Hearts” was onstage at the Country Music Association awards accepting the trophy for Best Male Vocalist. In a rare boastful moment, Kent posted a sign at the entrance of Cheatham Street the following day that read, “I told you so!”

As Strait went on to rack up more No. 1 hits on various charts than any artist in any genre, a new generation of artists began rising up through the dusty floorboards of Cheatham Street. Up-and-coming lyricists James McMurtry, Bruce Robison, Terri Hendrix, Todd Snider, and Hal Ketchum were all regular performers at the ongwriters’ Circle and part of what became known as the “Class of ’87.”

Kent sold the club in 1988 to focus on his family band with the fiddle-playing Jenni. For 10 years, the duo played fairs and festivals across the West and Southwest, including the State Fair of Texas and the 1988 Democratic National Convention in Atlanta. They disbanded when Jenni left for college. Even after so many years, Kent still felt drawn to the old warehouse, which had a short life as a fraternity club and a Tejano bar. In 2000, Kent re-opened the venue after he was given a cassette tape of a young songwriter named Adam Carroll. “He came home and said, ‘This guy needs a place to play,’ and all of a sudden the wheels started moving around in his head,” Jenni recalls.

“He didn’t care whether you were famous or not, he just cared about your songs,” Carroll says. “What it taught me was that you can be in art and music and have a lifetime in it and not be a star necessarily or be famous or rich. But you can do it for a long, long time if you love it.”

Walt Wilkins was already a songwriting veteran by the time he started playing gigs at Cheatham Street in 2001. Rising Texas country star Pat Green had recently scored national success with “Carry On,” co-written with Wil-kins, and the Wilkins-penned fan favorite “Songs About Texas.” Wilkins says he felt an immediate kinship with Kent.

“He knew who was going to take it seriously, and he provided this great club where it was hard to make money but it was easy to learn your craft,” says Wilkins. “It was one of the best listening rooms. Everyone got up there and gathered around the stage.”

And Jenni recently learned that Nashville’s Country Music Hall of Fame and Museum will honor her father and Cheatham Street in a spring 2018 exhibit featuring Kent’s handwritten lyrics to “The Songwriter,” as well as his signature straw hat, boots, and 1950s Gibson B-25 guitar.

Though Kent Finlay is gone, you get the sense that the songwriters still feel his presence at the circle, as if he were sitting on his favorite stool at the end of the bar and soaking up every lyric with a twinkle in his eye.

On a recent Wednesday night, Sterling opened the Songwriters’ Circle with his father’s “I’ll Sing You a Story (I’ll Tell You a Song).” The song, which is about a songwriter entertaining his loved ones with tales of travel, adventure, and “Jesus and wild señoritas,” serves as a love letter to the art of songwriting.

Kent’s final tune, written on the last day of his life, is proof that as long as there are great songs, Cheatham Street Warehouse will live on forever.

“He had this song called ‘The Last Thing I Want to do is Die,’ and that was the last song he ever wrote. The day he finished it, that was it,” Jenni says. “He wrote until the very end. To the people he mentored and the people who grew up under him, that is always this great little lesson. You’ve got to follow your passion.”