First round of acclaimed authors announced for annual event 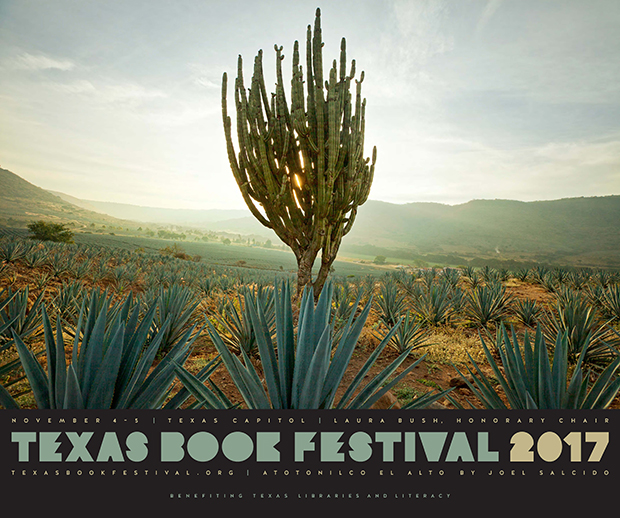 The 2017 Texas Book Festival poster was created by artist Joel Salcido, an Austin-based photographer and author of the new book The Spirit of Tequila.

The Texas Book Festival, set for Nov. 4-5 on the Texas Capitol grounds in Austin, connects authors and readers through panels, book signings, live music, cooking demonstrations and children’s activities to celebrate the culture of literacy, ideas, and imagination. The festival was founded in 1995 by former First Lady Laura Bush, Mary Margaret Farabee, and a group of volunteers, to promote the joys of reading and writing.

Texas Book Festival Executive Director Lois Kim says, “Each year, we try to surpass what we’ve done before to engage and delight book lovers from all corners of the state who come to the annual Texas Book Festival to see their favorite authors and to discover new ones.”

Claire Messud presents her latest novel, The Burning Girl, one of the most anticipated books of 2017, described as a bracing, hypnotic coming-of-age story about the bond of best friends.

Angie Thomas presents her debut novel, The Hate U Give, which launched at the top of the New York Times Young Adult bestseller list. The novel is about an ordinary girl in extraordinary circumstances who addresses issues of racism and police violence with intelligence, heart, and unflinching honesty. The novel received starred reviews from eight literary journals – one of the highest amounts ever garnered by a young adult novel.

Margarita Engle, the national 2017-2019 Young People’s Poet Laureate, Newbery Honor winner, and PEN USA Award winner, presents two new books – Forest World and All the Way to Havana. Forest World is a lively middle grade novel in verse, and All the Way to Havana offers, “. . . a child’s view of Cuba that is extremely accessible and as striking as it is unforgettable. A vibrant snapshot of modern Cuba, full of rich, sensory detail.” (Kirkus Reviews, starred review.)

Lisa Ko presents her highly acclaimed novel The Leavers, an examination of borders and belonging, which won the 2016 PEN/Bellwether Prize for Socially Engaged Fiction.

Top Chef judge and beloved figure in the food world Gail Simmons presents her new cookbook, Bringing It Home: Favorite Recipes from a Life of Adventurous Eating, in which she shares her best recipes and food experiences.

Other authors and the works they are presenting include Jami Attenberg, All Grown Up; Colin Meloy and Carson Ellis, The Whiz Mob and the Grenadine Kid; Matthew Dowd, A New Way; Roger D. Hodge, Texas Blood; and Tomás Q. Morín, Patient Zero.

In addition to this first round of authors announced, the festival lineup will include 250 celebrated and emerging writers, including journalists, artists, and scientists.