Festival promoter Eddie Stout grew up in Texas blues bands and has made it his life's mission to find, record, and promote authentic blues 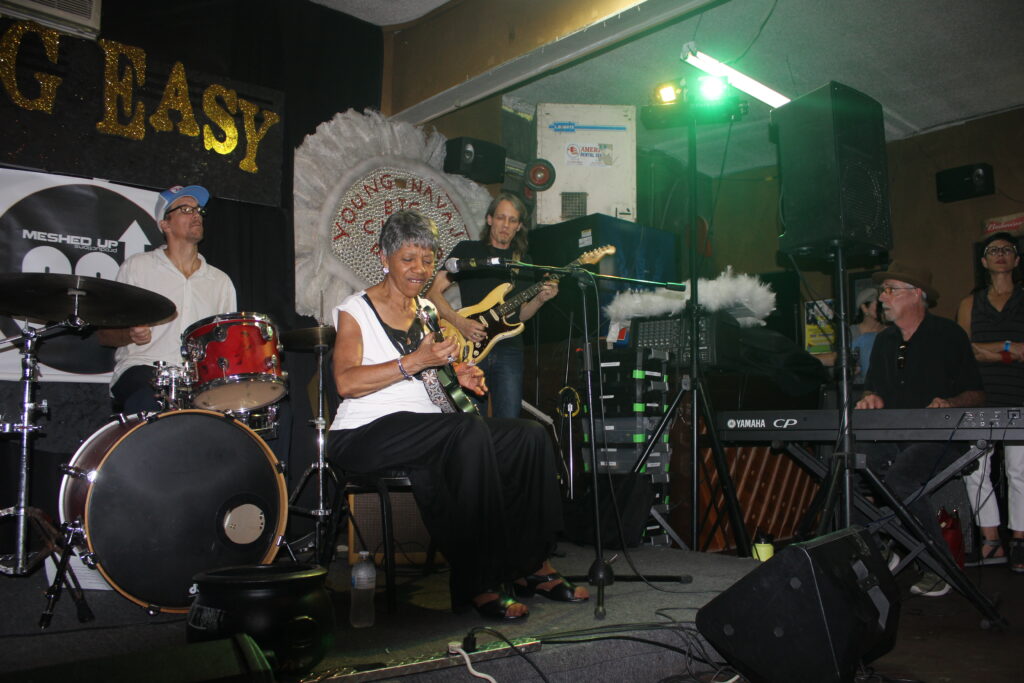 As an ambassador of Texas blues music, Eddie Stout has played bass in a number of bands, organized overseas tours for local blues musicians, and recorded more than 40 blues and roots artists for his Dialtone Records and Pee Wee Records labels.

But no blues show, event, or artist gets the Austinite quite as worked up his baby, the Eastside Kings Festival, the ninth edition of which is scheduled for Sept. 11-12. Held at the corner of 12th and Chicon streets, the festival is Stout’s homage to the blues musicians and scene that thrived in East Austin during the mid-and-late 20th century.

“I was born and raised here in Austin,” say Stout, 65. “Growing up, I went out to clubs on the east side to see bands like The Storm, the Nightcrawlers, and the Cobras. This is the music I grew up listening to.”

Packed, loud, and cacophonic, the clubs on 12th Street transform into authentic blues joints for the weekend, although most of the stages will be placed outside this year. “You get a chance to see these cats up close,” Stout says. “It’s a glimpse of what the east side used to be: The doors were open, the cats were playing, all the bands sitting in with each other, their music flowing out into the street.”

For championing a sound built on heartache, disappointment, and pain, Stout is surprisingly upbeat and positive. A few weeks before the scheduled festival, in the midst of another COVID-19 outbreak, he wasn’t too worried if the event had to be cancelled.

“Everyone will get paid,” he says. “Thanks to grants, all the artists engaged were paid in full last year” when the event was cancelled. Learning how to hustle enough grant money up front to pay for the event so the musicians get paid, no matter what, has become part of the job too.

When growing up, Stout learned bass well enough to join the Dynaflows blues band, an ensemble that an up-and-coming Stevie Ray Vaughan enjoyed sitting in with. He would move on to play in the bands of harmonica ace Paul Orta, singer Lou Ann Barton, Johnny Nicholas, Kathy Murray, and Anson Funderburgh.

Stout branched out into recording in 1984 in Dallas where he was playing bass in Teddy and the Talltops. He started Pee Wee Records, recording and releasing singles and albums of friends including The Rev. Horton Heat, The Paladins, UP Wilson, Darrell Nulisch, and Anson Funderburgh, as well as two volumes of the Texas Harmonica Rumble and obscure sides by Uncle John Turner and Johnny Winter.

Stout moved back to his hometown Austin to work for Amazing Records and then Antone’s Record, the label started by blues empresario Clifford Antone, doing foreign licensing deals for both labels.

When Antone’s Records passed on an opportunity to make an album of The Bells of Joy, the 1950s Austin gospel group with the million-seller “Let’s Talk About Jesus,” Stout started Dialtone Records in 1998 to record them. He followed The Bells of Joy album with albums on Texas Eastside Kings, an ensemble recording of East Austin players and The Texas Trumpets, showcasing four Austin trumpeters.

“I’m a big fan of Duke Records, Chess Records—postwar blues,” Stout says. “I’m always trying to find that sound and the people who have a link to that tone. It’s that raw sound. I know it when I hear it.”

Stout is realistic about the challenges of running a record company, much less one that specializes in obscure blues musicians.

“When CDs came in, people asked me if it was going to impact my sales,” he says. “Same thing when digital came in: ‘Is it going to hurt your sales?’ Well, I don’t sell anything. But it doesn’t really matter. This is a lot of fun, so I’m staying with it until the cows come home.”

Part of the challenge today is that cows are coming home. Many musicians featured at the first Eastside Kings festival in 2013 have passed away, forcing Stout to step up his game. “I’ve been digging deeper to find these guys,” he says.

He considers the challenge to be an obligation. “Blues fans are looking for artists they don’t know,” he says. “That’s why all these European and Japanese promoters fly in.”

And although Stout’s thing is Texas postwar urban blues, that big band horn-heavy sound, he’s bringing in some stone country blues from Georgia. “I’ve never heard anyone play Robert Johnson like Jontavious Willis does,” he says.

Roger Wood, the Houston blues scholar and author of Down in Houston: Bayou City Blues, emcees the outdoor stage every year and has become a Stout admirer.

“Through Eddie’s production of recordings, international tours, and especially the Eastside Kings Festival, he’s cultivated awareness and appreciation of one of this state’s great cultural legacies,” Wood says. “Major commercial entertainment corporations typically produce and profit from ridiculously large and expensive music festivals these days, but the independent-minded Eddie jams to his own drumbeat, so to speak. His quirky little annual gathering offers not only superb off-the-mainstream-radar live blues, but also a bargain price and easy access. Even with the gentrification of East Austin, there’s a downhome vibe at the Eastside Kings Fest that, like the music, is the real deal.”

A preshow at Antone’s on Friday and an after-show at Justine’s on Tuesday round out Eastside Kings weekend.

At best, Eastside Kings will be loose and sweaty—in an appropriately bluesy way—with some serious singing and playing going down on the outdoor stage and inside the row of clubs across the street on 12th. And if the virus puts the festival on hold for another year, no worries. Like Stout said, the performers get paid in full. With treatment like that, almost all are guaranteed to return, once the coast is clear.

“It’s effortless for me to do this because I dig it,” Stout says. “I like finding people. This has a lot of cool factor in it.”

Advance wristbands are $25 per day from Antone’s Record Shop.