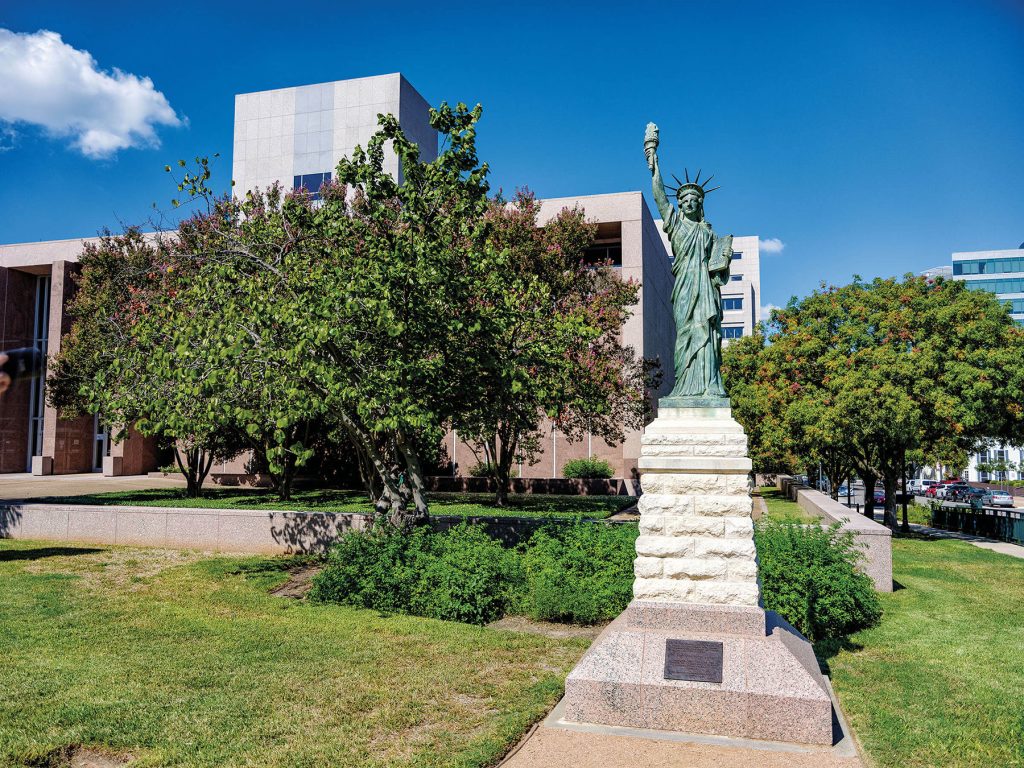 Best French contribution to American culture? That’s a toughie: french fries or the Statue of Liberty? The trouble with the latter is it’s all the way in New York City. Those who seek to pay homage to this beacon of freedom must wait in a long line before embarking on a crowded ferry ride and then wait in another long line—and that’s only for those smart enough to have booked a reservation months in advance. A more convenient option is the Statue of Liberty on the grounds of the Texas State Capitol in Austin. The replica is one of more than 200 the Boy Scouts of America created and deployed across the United States between 1949 and 1951 as part of a “crusade to strengthen the arm of liberty,” according to the March 1949 issue of Boys’ Life magazine. Amid fanfare at a promotional event on Liberty Island in New York, Chief Scout Executive Arthur A. Schuck boomed through a microphone that the initiative allowed the Boy Scouts “more fully to serve the nation in its endeavors for a free post-war world.”

The Boy Scouts donated the 8-foot, 4-inch bronze miniature to the state of Texas in 1951. Originally located on the Capitol’s southwest grounds, the monument was moved in 1997 to the northwest grounds to preserve the 1888-1915 appearance of the south grounds, according to Ali James, curator of the Capitol. In the process, workers discovered a Boy Scouts time capsule and relocated it to the Bastrop chapter, to be opened in 2076. The Austin statue was made by the Friedley-Voshardt Foundry in Chicago, which also produced the 1888 Goddess of Liberty statue for the Texas Capitol dome. There are four other statues of liberty across the state—in Big Spring, Dallas, Midland, and Port Arthur—but the Austin version is perfectly situated. Park near Colorado and 13th streets and walk a short distance among the historic Trail of Trees to the Supreme Court of Texas building, where Lady Liberty stands on a native Texas limestone base upon sunset red granite. “It seems appropriate that the torch is illuminating the path toward liberty and justice for all Texans,” James says.