A Drink Back in Time

A new spin on the world's first fermented beverage 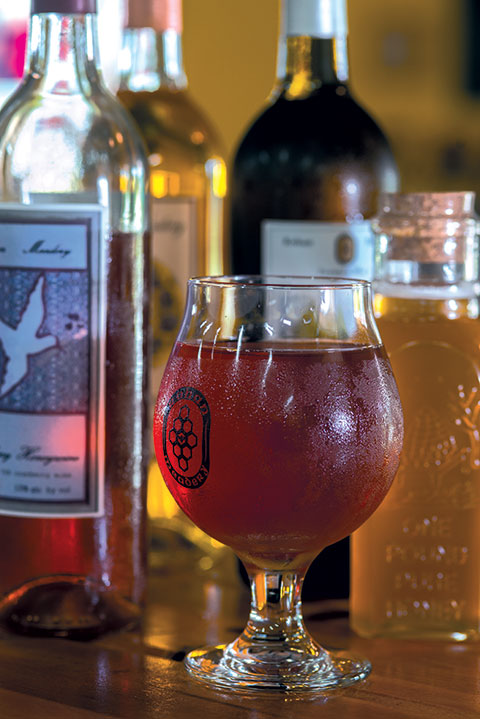 After mulling over wedding gift ideas for a friend, I decided to bypass her registries, forgo the china and silver, and instead turn to a 9,000-year-old beverage, the honey-based elixir known as mead.

In fact, mead (also known as honeywine) served as an integral part of establishing the post-wedding vacation we know as the honeymoon, as it was widely regarded as an aphrodisiac. During the Middle Ages, so the story goes, wedding revelers not only consumed large quantities of mead, but they also gave the bride and groom enough mead to last through one lunar cycle in hopes of expediting a fruitful union.

I didn’t have to search very hard to find mead in Texas. The United States mead industry is quietly booming—with a 130 percent increase in sales from 2012 to 2013—and Texas alone boasts nine meaderies and an association dedicated to promoting the industry. The Texas Mead Association, in fact, organizes an annual Texas Mead Fest each September at Rohan Meadery in La Grange.

I recently visited Rohan to see where owners John and Wendy Rohan turn honey into wine. John, whose great-grandfather immigrated from Moravia to nearby High Hill in the 1800s, says his love of Czech-style mead may be in his genes. In 2009, tired of the heavier German and English-style meads they encountered stateside, the couple founded their own meadery, one of Texas’ first.

Now the couple, along with their three children, run Rohan on their 30-acre Blissful Folly Farm. The farm also supports a 13-hive apiary, a vineyard, and an orchard with peach, pear, and kumquat trees. A menagerie of animals includes two miniature Sicilian donkeys, three dozen dairy goats, and abundant chickens, which frequently beg for crackers from customers sitting outside on the pergola-shaded patio.

The meadery features small-batch mead in nearly a dozen creative flavors like buttery Apple Cyser and crisp Kumquat Honeywine. “We grow a lot of fruits and herbs—like mint, sage, and basil—here on the farm, and what we can’t grow, we try to buy locally,” Wendy says.

Inside the tasting room and production facility, I sit at a long wooden tasting bar facing nine stainless steel fermenting tanks and prepare to enjoy my “flight” of five meads. A faint, honey-kissed sweetness lingers in the air. I start with a sip of Orange Spice, its dry, honey-citrus base accented with cinnamon and nutmeg. Next, Peachy Keen presents a subtle peach flavor, and a mead known as Temperament Pyment—a blend of honey and Tempranillo wine—tastes smooth and sweet.

Wendy asks that first-time mead tasters keep an open mind. “You may get something that looks like wine, so your brain anticipates that taste, but it’s something totally different,” she says. She says that mead, like wine, is influenced by terroir— an agricultural product’s reflection of geography and climate. “You have a hive that sits in the same place every year, but every year the honey will taste different, thanks to the flowers that bloom.”

The meadery sells shirts that read, “Save the Bees, Drink Mead,” and donates a portion of the proceeds to fund honeybee conservation and research. After all, most meads require a pound of honey per bottle.

I particularly appreciate those bees’ efforts when I taste the Cranberry Honeywine. The honey’s sweetness presents itself initially, but a pleasant tang lingers behind; it’s a sophisticated version of the sweet-and-sour gummy candy I enjoyed as a kid.

Of course, I can’t leave without sampling Honeymoon. Smooth and refreshing, with a subtle complexity, this Old World-style mead makes me appreciate those ancient newlyweds’ good taste.

As for my friend, I better start thinking of baby-shower gifts in case this honeymoon mead lore rings true.