A craft beer crawl in the heart of the city 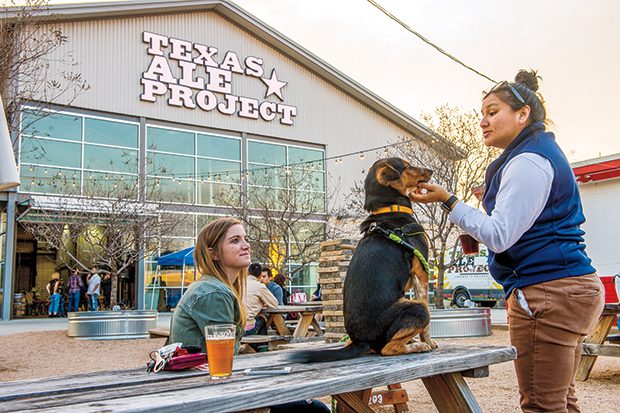 The Texas Ale Project, like most breweries with outside seating, allows pets.

The craft beer scene continues to thrive in Texas, and Dallas is no exception. Twenty-seven of Texas’ 189 breweries and brew pubs call the Dallas-Fort Worth metroplex home, according to The Brewer’s Association, a national organization dedicated to promoting independent American brewers.

But my wife Jamie and I weren’t venturing outside of Dallas proper for our tour. On a recent long weekend in Big D, we made plans to visit four breweries within a 10-minute drive of each other. We resolved to drink slowly, eat heartily, stay safe, and take the time to savor Dallas’ finest suds.

Pulsing with color, music, and activity, the taproom felt like a neighborhood party. College kids played Battleship and other board games while stroller-pushing parents sipped beer and talked about world events. Outside, a patio outfitted with lounge chairs and benches awaited the taproom overflow.

Deep Ellum’s beers range from the easygoing and accessible to the bold and daring. Tastes of the citrusy, low-alcohol Easy Peasy IPA and the crisp, refreshing Dallas Blonde evoked memories of cool summer evenings at family barbecues. But my wife and I decided to go big with the Cherry Chocolate Double Brown Stout. Nutty and chocolatey, with subtle cherry notes on the nose, this limited-release beer warmed me up and recalled past Valentine’s Day indulgences.

Hungry for lunch, we ordered from the bar menu. I dug into a spicy, stick-to-your-ribs plate of chili-covered tater tots, and my wife sensibly ordered a sandwich. As the acting Reuben sandwich expert in our family, Jamie dove into Deep Ellum’s offering, which featured a mountain of corned beef on fresh marble rye. In between bites and sips, she gave it her seal of approval.

After letting the beer and lunch settle, we soldiered off to Community Beer Company in Dallas’ Design District, one of the city’s newest hot spots. Originally a strip of warehouses built south of the Trinity River, the Design District has transformed into a home-decor and nightlife destination where antiques shops bump elbows with hip eateries and trendy boutiques.

If Deep Ellum Brewing felt like a neighborhood party, Community had the atmosphere of a lively barn dance held inside an airplane hangar. Everything, from the fermentation tanks and beer taps to the cornhole boards, lives under one roof. Bar tables and picnic benches dotted the taproom as college sports played on projection screens on the brewery wall. A stack of board games next to the main bar beckoned players, and a two-piece rockabilly outfit set up at the far end of the hall.

From the taps, I tried Community’s citrusy Witbier while my wife enjoyed a bold, hoppy Mosaic IPA. As we played cornhole and listened to covers of Johnny Cash and Willie Nelson songs, the space filled with fellow customers.

After finishing our visit with a rousing game of Taboo, we drove a few blocks to Texas Ale Project. Inside, wooden tables and wall paneling project a vintage Texas vibe while stained concrete floors and sleek bar tops bring modernity to the mix. A large wall of windows provides views of downtown Dallas while an expansive patio encourages outdoor merriment.

Like the other breweries on our tour, Texas Ale brews excellent beer. The 50 FT Jackrabbit IPA balanced remarkable smoothness with a piney, semisweet hop kick while the limited-release Caucasian—described as a “white Russian imperial stout”—burst with vanilla and coffee flavors. The twist is in the color. While traditional stouts are generally thick and dark, the Caucasian appears golden and transluscent like an ale.

With the evening in full swing, we traveled back to the Deep Ellum neighborhood to visit BrainDead Brewing, where a robot constructed from a beer keg greeted us at the door. Inside, artsy 30-somethings chatted at long picnic benches and industrial bar tables, circular lamps attached to wooden shipping pallets hung from the ceiling, and an array of music-themed artwork decorated the interior walls.

With a hip decor and bohemian clientele, BrainDead also takes risks with its beers. While I played it safe, noting the essences of banana and clove in my Idle Playthings Belgian Golden Strong, my wife swung for the fences with the 10th Anniversary DIPA. Made with wild yeast and aggressive hops, the Double IPA exploded with rich citrus and honey flavors. And while we didn’t order any food, the gourmet bar grub looked fantastic, especially the “Not Yo Fries” our tablemates were devouring. Loaded with beef picadillo, pickled jalapeños, cheese, and guacamole, they looked (and smelled) so delicious, I almost asked them for a taste.

As we polished off our beers and enjoyed a crisp breeze blowing in from Main Street, we agreed: Traversing the heart of Dallas’ craft beer scene revealed fun times and fantastic beer. Four breweries down, 23 to go.