The most popular dish among cowboys driving cattle to market, the chicken-fried steak began as a simple pounded steak—usually a cheap cut that the chuck-wagon cook tenderized with a good walloping—that was cloaked in flour, salt, and pepper, and then fried in a skillet. 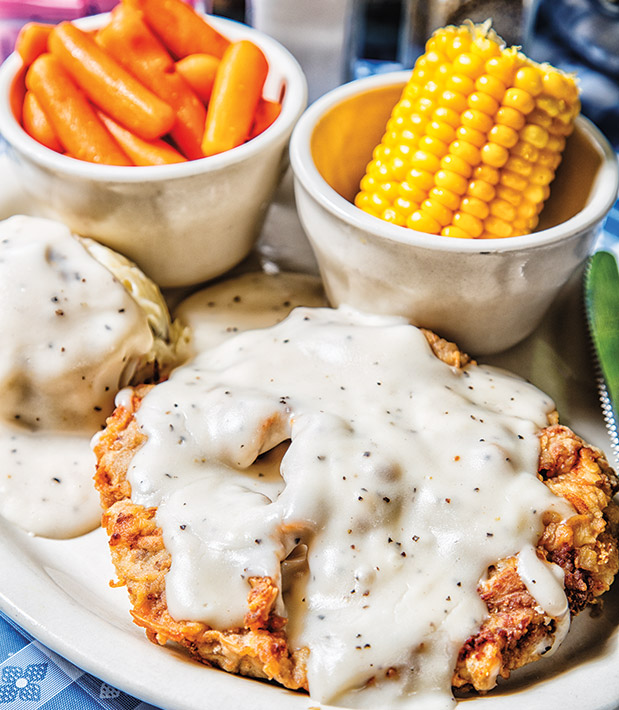 If milk were available, the steak would be dipped in the liquid before battering and frying. Today’s version hasn’t changed too much in theory, though cooks sometimes use heavy cream instead of milk, add paprika or other spices to the seasoning mix, or serve the steak with chili or a fried egg instead of cream gravy. Some fancy restaurants make this Texas standard with rib-eye or another high-quality cut of beef. Readers nearly unanimously picked a near-West Texas café as serving their favorite version, but restaurants in San Antonio, Tomball, Irving, and San Angelo also won votes.

Though Mary’s opened in 1986, this landmark in the hamlet about an hour west of Fort Worth feels as though it were plucked out of the 1950s. People traveling across North and West Texas often plan their trips to coincide with meals at Mary’s, and specifically to eat the renowned CFS. It’s not as pretty as some—it’s not encased in a billowy, golden-fried jacket of crust—but it is breaded, pan-fried, and extremely tasty. The small portion can feed a small family, the medium might suit a football team, and we cannot imagine who could tackle the large order, which spills from the plate. (As Don Reeves of Bedford says, “Newcomers usually gasp at the first sight of it. Even regulars laugh at its monstrosity, even though they’ve seen it a thousand times.”) Ask for gravy on the side to swirl each bite in as you see fit, or for dunking pieces of your grilled Texas toast. Frank Woodall of Pflugerville puts it best, “The crispiness of the crust, tenderness of the meat (cuts with a fork), with gravy and a side of French fries, just makes you feel good inside.” Call 254/672-5741.

Open since 1938, the Tip Top Café on Fredericksburg Road recently received a Texas Treasure Business Award from the State Historical Commission in recognition of its longstanding success. Another distinction is the way the Tip Top positions its CFS atop a shallow pool of gravy, which helps keep the steak crispy. A boon for residents of northern San Antonio was the recent addition of a second Tip Top location on Nacogdoches Road.

Opened in the 1950s, Goodson’s doesn’t mind bragging a little. The sign out front says it’s world-famous and that it’s the “Home of the Best Chicken Fried Steak in Texas.” Folks from Houston and beyond make regular trips to eat the CFS, available in two sizes and still prepared the way Ella Goodson did more than a half-century ago. Ask for grilled onions on top, and be sure to leave room for at least one of the accompanying yeast rolls.

A legend in West Texas, the 1974 landmark has seen generations of customers come through its doors in search of authentic German dishes, T-bone steaks, and the beloved chicken-fried steak. Breaded and grilled (not fried), the steak is served with cream gravy and comes with sweet potato or regular French fries, plus a baked potato or rice. “Best food and best people,” touts fan Gene Arrington of Plainview.