The Fat Grass Restaurant and Bar 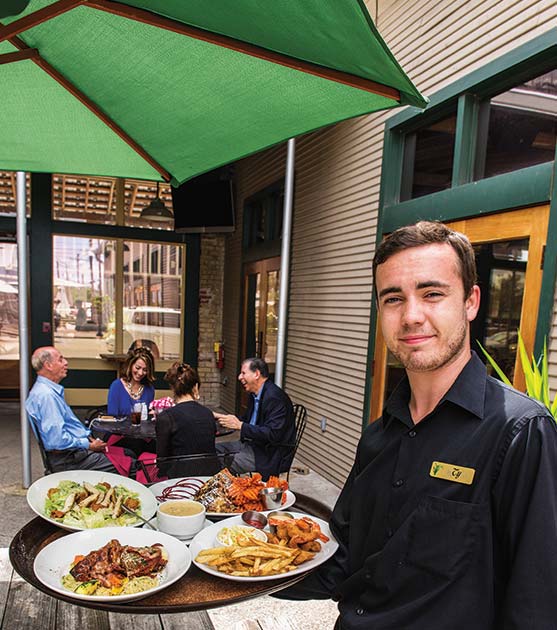 With a menu that changes frequently according to what’s fresh, The Fat Grass fills a fine-dining niche in Bay City.

Soft recessed lighting and exposed brick walls, smooth jazz on the sound system, and the mouthwatering aroma of butter and grilled fish transport me to the romantic City of Lights. But I’m not in France, or even Paris, Texas. I’m a half-hour from the Gulf of Mexico in Bay City, the county seat of Matagorda County, and I’m enjoying an unexpectedly fine dinner at a restaurant called The Fat Grass.

Here, in a historic complex of buildings across the street from the Matagorda County Courthouse, Chef Shawn Watkins, a native Texan who trained at the Texas Culinary Academy in Austin, marries influences from his worldwide travels with local specialties like chicken-fried steak. And the name? It’s a playful homage to the English translation of “Matagorda,” which means, roughly, “thick brush” or “fat grass.”

I recently found myself visiting the area for work, and I would likely have settled for a chain restaurant next to the hotel had my colleagues not suggested The Fat Grass. As we settled into cherrywood chairs in the main dining room, we took in the elegant bar, white linen tablecloths, and lively crowd, feeling confident that we had made the right choice. And then we tackled the menu, which changes frequently according to what’s fresh but almost always focuses on seafood, steaks, burgers, and entrées with elegant flourishes like sherry-and-thyme demi-glace and truffled mac-and-cheese.

While my dining companion ordered the grilled salmon with lemon-butter sauce and basmati rice, I zeroed in on the mahi thermidor, a variation of a popular lobster dish Chef Watkins had once served at a country club in the area. Accompanied by tri-color fingerling potatoes and roasted vegetables, the pan-seared fish was served in a pool of creamy crab-and-Parmesan sauce, with just a hint of tarragon and white wine. “I’m a big fan of acids in food, because that’s what makes the flavors pop,” says Watkins. “It’s important to have salt, sugar, fat, and acid, but it’s common to forget the acid. I use wines, lemon, vinegars—a little splash here, a dash there—to create a taste explosion in your mouth.”

After graduating from culinary school in 2004, Watkins worked for two years in the kitchen at La Mansión in San Antonio before further honing his skills in Europe on a series of river cruises. Eventually, though, he returned to Texas, settling briefly in Palacios to spend more time with his family. A catering gig drew the attention of movers-and-shakers in nearby Bay City, who encouraged Watkins to open his own restaurant.

Meanwhile, a trio of narrow lots facing the courthouse in Bay City went up for sale. Occupied since 1908 by a series of businesses that included a grain company, mercantile, a department store, and several restaurants, the lots had been mostly vacant since a fire in 1969 destroyed a longtime restaurant called Etie’s Café and a second eatery, Conspiracy, shuttered in the 1980s.

In 2010, Watkins and investor Daniel Marquardt bought the three lots, including the damaged shell of the original 1908 Conspiracy building, and set out to restore as much as they could from the surviving historic structures. Contractors soon replaced awnings, installed replicas of the original windows, and removed stucco to expose original yellow and red brick, eventually building three separate dining areas—the main dining room (the former Conspiracy space), an outdoor patio (the former Etie’s space), and a casual dining room with televisions and a bar area. In 2011, The Fat Grass opened for dinner service.

On a second trip to The Fat Grass, I chose the casual space, which resembles a sports bar thanks to pendant lights and big-screen televisions mounted above a beautiful granite-topped bar. Mixed drinks are available here, as are more than 50 varieties of wine from Europe, Argentina, Chile, California, Oregon, and Texas. Next time, I’ll take a glass outside to the courtyard, where Watkins recently opened an “all-Texas” bar focusing on wines, liquors, and craft beers made in state.

My companion and I considered our options, including burgers topped with blue cheese or barbecue sauce and a locally sourced field-green salad with a French-style dressing invented by the original proprietor of Etie’s Café. This delicious salad dressing—both sweet and tart—is so top-secret that Watkins keeps the recipe locked away in a safe.

But I had already set my sights on The Fat Grass’ famous Chicken Fried Deer Steak. Before he opened The Fat Grass, Watkins had been told he’d be judged by his chicken-fried steak. At first he wasn’t interested in serving the dish at all, but his mother suggested he try a creative variation. Served with peppery homemade gravy alongside mashed red potatoes and sautéed green beans reduced in wine, the venison steak was tender and juicy, with an extraordinarily light and crunchy batter. Watkins tells me that he sells between 100 to 200 orders each week, making the Chicken Fried Deer Steak his most popular menu item.

It’s perhaps the ideal illustration of how The Fat Grass marries tradition and creativity.