Fearing’s at the Ritz 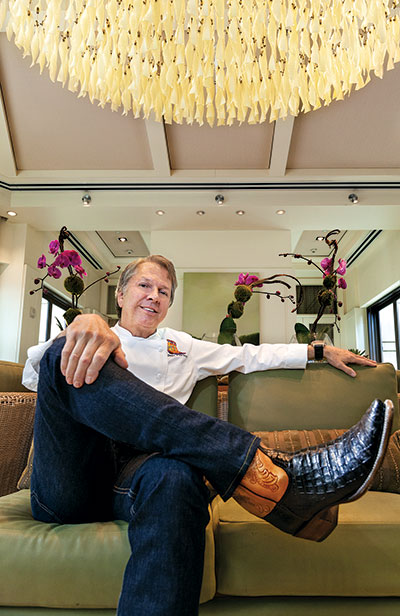 Dean Fearing strides across the dining room from his kitchen inside The Ritz-Carlton Hotel in Dallas, delivering an appetizer of Texas Carpaccio to a couple enjoying a lavish dinner. The famous chef, cutting a contemporary profile in his crisp, white chef jacket, blue jeans, and cowboy boots, introduces himself with a grin and handshake.

The two nod as one of the most decorated figures in the American culinary world tells them about the paper-thin slices of Texas-raised beef they’ve ordered, which are paired with Gulf prawns and drizzled in Texas olive oil. Ever-involved with the de-

tails of his busy, open kitchen, Fearing takes obvious joy in meeting the people who want to eat his food.

After graduating from the Culinary Institute of America, the Kentucky native arrived in Dallas in 1979 to work as the poissonnier (fish cook) at the Fairmont Hotel’s prestigious Pyramid Room. He quickly moved over to the Mansion on Turtle Creek, where he was soon promoted to executive sous chef—just as chefs were beginning to transition away from formal continental preparations and incorporate fresh, modern ideas. He spent a few years in North Dallas at a place called Agnew’s and a little while at the Anatole Hotel’s Verandah Club, where the clientele included real-estate developer Trammell Crow, who invited the chef to cook dinners at the Crow home for such guests as George H.W. Bush, Henry Kissinger, and Margaret Thatcher.

“I was having the time of my life!” Fearing recalls. “I was making food that people liked, in an exciting, growing city, and meeting all of these people. It was fantastic.”

Fearing’s friendship with the Crow family grew to the extent that he took the Dallasites to his parents’ house for the Kentucky Derby in 1985. Later that afternoon at Churchill Downs, the young chef told his famous patron that he was leaving the Anatole to accept a new challenge as executive chef at the Mansion on Turtle Creek.

Fearing’s bold idea was to bring new life to the menu at the Mansion by focusing on ingredients native to Mexico and New Mexico. Along with fellow chefs Stephan Pyles of Dallas, Robert Del Grande of Houston, and others who were exploring the centuries-old culinary cultures of the Southwest, Fearing applied classical cooking techniques to such components as fresh and dried chilies, tortillas and corn, black beans, cumin, cilantro, and epazote, thus creating the modern genre known as Southwestern cuisine. The food world took notice: The New York Times’ Craig Claiborne came to experience it firsthand, Wolfgang Puck gave it his stamp of approval, and in 1987 Fearing was included in the James Beard Foundation’s “Who’s Who” list.

Fearing’s tortilla soup and lobster taco helped put Dallas on the national dining map, and the two dishes remain wildly popular on the menu at the Mansion. However, after about 20 years here, Fearing took his leave, and in 2007 opened his self-named restaurant, Fearing’s, at Dallas’ Ritz-Carlton hotel. Within a few months of opening, Esquire magazine deemed Fearing’s to be the best new restaurant in the nation.

Today, with support from Chef de Cuisine Eric Dreyer, Fearing creates dishes that are true to his legacy but that also explore the world beyond the American Southwest.

During the tasting adventure my husband and I enjoy this particular Saturday evening (usually seven courses for $100 per person), we revel first in appetizers: smoky fried oysters lavished with Sonny Bryan’s barbecue sauce ($22) and Wagyu beef Carpaccio and Gulf prawns ($26). Next comes a course of black cod paired with scallops from Nantucket, graced with bits of pork belly and wild mushrooms. We return to the Lone Star State via a South Texas antelope chop, glazed in apple cider and served with an enchilada incorporating tender rabbit shreds with green chilies.

To keep things interesting, Fearing stays on the watch for new food ideas, changes much of the menu every few weeks, and even offers a full vegetarian menu (which he can make vegan, as well). Dining out with his two teenage boys means he eats a lot of the family’s favorite food—namely, barbecue—but recent travels in India sparked a new interest in the world’s curry dishes.

Time will tell if we’ll see influences from Kashmir or Goa on the menu at Fearing’s. But one thing is clear: Whatever he brings from the kitchen will be delivered with enthusiasm—and a smile as big as Texas.