These hand-held treats speak of tradition and taste 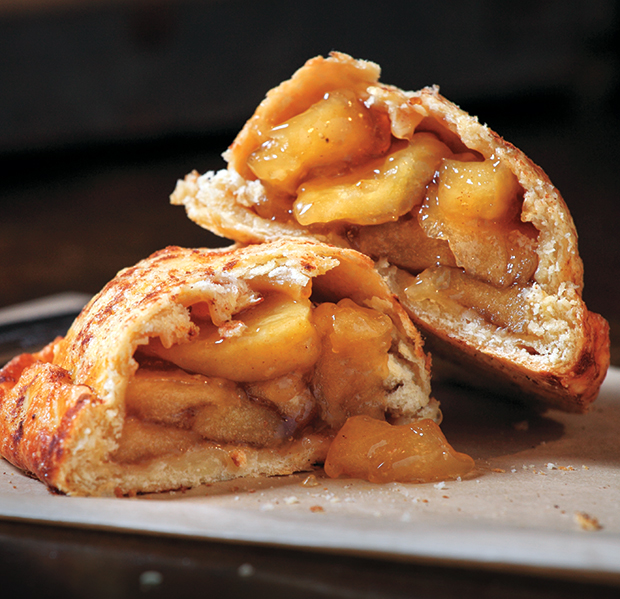 Browsing the stands at a new farmers market in Fort Worth, I was slowly making my way through roduce and cheese offerings when a friend grabbed my arm. “Come look at this,” she said. “Lindsey has fried pies!”

Hoping I didn’t knock anyone down in the process, I quickly navigated a crowd thick with dog-walkers and stroller-pushing shoppers to the table manned by Lindsey Lawing, the pastry chef and proprietress of Sweet Lucy’s Pies.
There, just as my pal promised, was a pile of wax-paper sleeves bearing labels like Apricot and Blueberry-Goat Cheese. I peeked inside to see half-moon-shaped, golden-brown bundles with wide, hand-crimped edges.

“You’re making fried pies?” I exclaimed, startling Lindsey and other patrons. “Do you know how exciting this is?”

That my hometown’s favorite pie baker had begun producing the single most delightful dessert I’ve ever known made this a landmark day. It had been a long, long time since I’d found a fried pie worthy of celebration. There are plenty of fried pies to be had, but very few that I believe are worth the calories and cholesterol.

Especially distressing about the lack of great fried pies in my part of North Texas is the loss of heritage I fear it represents: Fried pies were once a part of life here, particularly as Fort Worth lies on the old Chisholm Trail. The hand-held sweet was a treasured treat among cowboys whose long, backbreaking days of work in the saddle contained few bright spots. When their chuckwagon cook could find wild fruit on the trail and time to whip up a batch in the cast-iron skillet, the cowpokes must have felt that Christmas had come early. If the cook could send his drovers off to a day of dusty work with fried pies in their saddlebags, the hours surely passed more happily.

Fried pies and their close cousin, the hand pie (identical in construction to the fried pie, with pie crust wrapped around fruit filling and baked)—didn’t originate with cowboy cooks, however. In fact, we Texans are hardly the first to embrace this sort of hand-held deliciousness. The Czechs, who were among the early Anglo settlers in Texas, brought with them their beloved kolache, a pillowy yeast roll filled with fruit. And our Latin-American neighbors to the south have made empanadas filled with pumpkin and other sweets for centuries.

And in the South, the personal-size pie, either fried or baked, has been a staple for many decades, its portability a plus for people working in the fields. Whether my Wichita Falls great-grandmother’s apricot fried pie recipe came from her West Texas ranching neighbors or from her own kinfolk back in Tennessee is missing from our family history, but her passion for its purity and simplicity was handed down to me intact.

And because I judge all fried pies by those apricot pastries of my childhood, the sensation I enjoyed while biting into the apricot fried pie I found at Sweet Lucy’s was as close to a spiritual experience as I can have with food. The delicate crust, with its wide, fluted edges and feather-light texture, was nothing short of heavenly. Inside, the big, juicy pieces of fresh apricot in still-warm, slightly sweet filling spoke of a cooking tradition long past—and all but lost.

Quizzing Lindsey about her fried pies, I learned that she only makes hers with what’s seasonal and locally available, as she does with her traditional pies. Apricot, peach, and various berry-and-goat cheese are popular through the spring and summer, as are butternut squash, pumpkin, and cranberry in the fall. She told me that she simply taught herself to make them, aiming to offer something nobody else around here was doing.

“My sister, Jodi, and I worked and worked on our fried pies, testing recipes until we had it right. We thought it would be good to make something different; we tried them out on family and everyone loved them,” she said, noting that she uses her buttermilk pie dough for the crust, as it’s substantial enough to handle the heft of fruit inside. 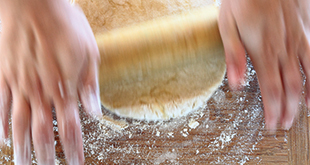 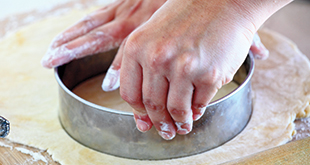 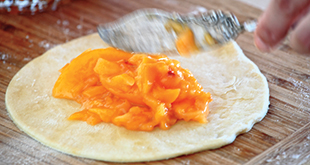 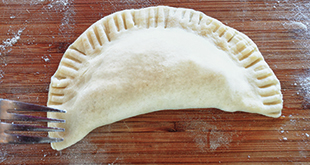 Lindsey’s fried pies inspired me to go on a search for other remarkable fried pies, those that I think would have impressed my great-grandmother, those that will meet the demands of a picky pie palate like mine. I kept my search to near North Texas and just west of here, wandering not too far from the old Chisholm Trail.

As I roamed, I discovered that I’m a fan of those fried pies and hand pies found in small bakeshops, cafés, and barbecue or burger joints, because they’re usually made by hand by someone using an old family recipe. More often than not, the ones found in convenience and grocery stores tend to be mass-produced, which usually means they feature canned fillings; one bite into stale pastry enveloping a cloying, artificially colored goo told me all I needed to know.

Asking friends about places they’ve found fried pies, I wound up with a list of nearly 20 places to try. To organize my research, I created a score sheet complete with criteria for crust (thick? thin? flaky? greasy? color? texture?); filling (real fruit? how much cornstarch? any artificial flavor or color?); and appearance (shape? handmade? edges?). The best pies could score as many as 25 points; any pie scoring less than
20 points wouldn’t make my final list.

Striking out northward from Fort Worth toward the Red River, I rediscovered fried pie nirvana at a most fitting place, The Fried Pie Co. & Restaurant in Gainesville. Unchanged since my first happy experience here some 20 years ago, this friendly café serves comfort food at breakfast and lunch and keeps its glass-front pie cases filled with fried pies made each morning starting at 6. I lost count at about 15 varieties, including blueberry, apple, pecan banana cream, pineapple cream, coconut, and chocolate, some of which are adorned with icing.

Because I’m a purist, I don’t need enhancements on my fried pies—I want the crust to speak for itself. Beholding the Fried Pie Co.’s apricot fried pie, with its plump dome shape and carefully twisted edges, I noted a scant sprinkling of cinnamon and a tiny bit of coarse sugar on the buttery crust. The thin, flaky exterior cut easily to reveal an interior filled with mashed apricot and very little cornstarch; its flavor was true apricot, slightly sweetened, with not a hint of fake additives. My husband, who tried both blackberry and peach flavors, found near perfection in his choices, too.

Traveling around oil and cattle country, we found fried pies in places like Muenster, a deeply Bavarian town where a little store called Bayer’s Kolonialwaren is noted for its German beer selection and massive strudels, as well as iced fried pies in seven different flavors. In Decatur, Catfish O’Harlie’s is a busy family restaurant that takes time to serve hot pies fresh from the fryer, pretty and golden with a crunchy crust and fruity filling bubbling through the fork-tined edges. In Lipan, Natty Flat Smokehouse makes its lightly frosted apricot, cherry, apple, chocolate, and buttermilk fried pies on Monday, Wednesday, and Friday, serving them in wax-paper wrappers.

The best find west of home was at The Shed, a little café within David’s Stove Shop, situated on the Interstate 20 frontage road between Aledo and Weatherford. Every day, chef Jeff Carr’s mom, Alice Carr, creates generously sized hand pies, packed with apricot, peach, cherry, or apple filling. Each has a hand-turned crust edge, and no two pies look alike. The cherry pie gets a little turbinado sugar on its crust, the apple takes on a cinnamon sprinkle, and the peach and apricot are plain. With every bite, fresh, flaky crust gives way to real fruit—no wonder the little café sells more than 150 of these baked hand pies weekly.

A fellow connoisseur of homemade sweets sent me to Dallas to check out Blues Burgers, a hopping burger joint in a nondescript shopping center. I was thrilled at the tip, because I would never have guessed that fried-pie delights awaited inside. My family and I shared two oversize fried pies, one apple and one cherry, because I don’t know how anyone could finish even one of these beauties. Made to order, they’re served piping hot. Each pie had a burnished, sugar-dusted crust that flaked easily; fillings featured big pieces of fruit. Owner Catherine Duncan credits her Aunt Sharon with the East Texas recipe, saying it’s a source of family pride.

Back home again in Fort Worth, I found a lovely hand pie at Black Rooster Bakery, a French-style bakery making European breads and myriad pastry options, including a pie variation called a galette. Sprinkled with coarse sugar and baked until golden brown, the pie broke open to reveal a filling of dark cherries tempered with a little lemon juice to strike the ideal tart-sweet balance. Flavors change daily and include blackberry, peach, and apple. Savory hand pie varieties at breakfast sometimes feature mushroom, feta and egg or bacon, and mushroom and Swiss cheese fillings, sans sugar on the crust.

After four months of pounding the pie path, I took encouragement that some bakers are upholding standards set forth countless generations ago. Interestingly, the apricot fried pie from Sweet Lucy’s Pies that started the search remains my top pick. Though Lindsey didn’t learn the craft from a great-grandmother or any cattle-drive ancestry, she holds hope that someday her little girl— 3-year-old Lucy, for whom her baking operation is named—will want to carry on this new tradition. I’ll watch with keen interest, too, in the name of fried pie survival.