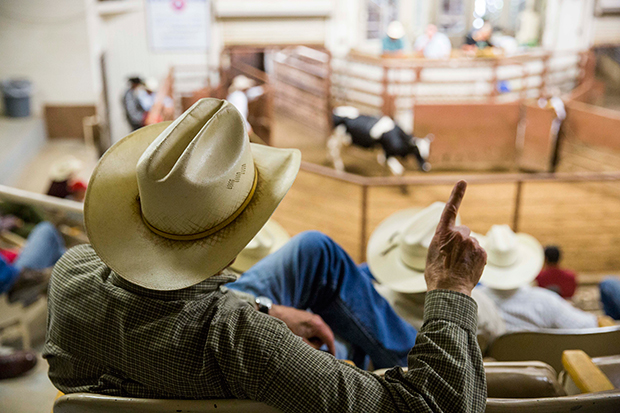 When sitting in a stockyard café, surrounded by weathered cattlemen in sweat-stained Stetsons and busy waitresses balancing plates of chicken-fried steak and pots of hot coffee, it’s worth opening your ears to absorb a few local tales. 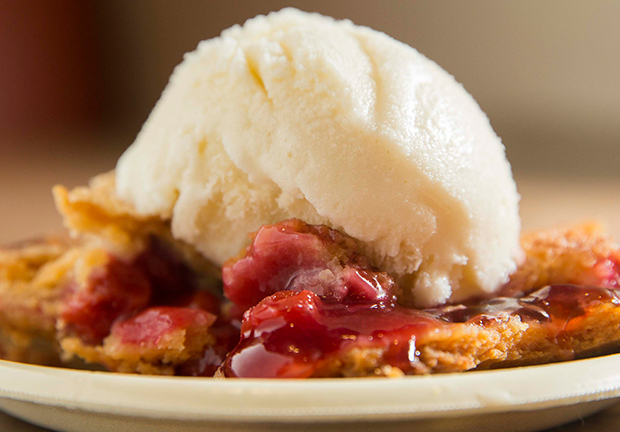 Stockyard cafés typically stay open late on auction days, until the sale is over:

Meals consumed while researching this story

To get a taste of Texas’ stockyard cafés, I drove 1,500 miles over five days to visit livestock auctions in Amarillo, San Angelo, Elkhart, and West. I would have loved to stay on the road to make my way across the state, diner by diner. But reality intervened.

There are sure to be many more downhome meals to be eaten at stockyard cafés like the Cow Palace in Gonzales, AJ’s Café in Alice, Grattons Cajun Kitchen in Karnes City, Circle M Barbecue in Eastland, and Cow Talk Steakhouse in Navasota.

Still, I managed to pick up a few extra pounds along the way:

Biscuits and gravy with two eggs

Like the story about an agitated cow that chased a Piney Woods rancher into a pond, where he waited in the stagnant water until the cow lost interest. Or the yarn about a woman from the plains who grew so frustrated with her husband’s goats that she sold the small herd to a neighbor and reported them stolen—until investigators started asking questions.

Inevitably, the café discourse circles around to the range, weather, and family, then branches off again as new arrivals amble in to take a seat among the crowd, patting backs and shaking hands along the way.

There are about 100 auction barns scattered across Texas where buyers and sellers meet weekly to trade livestock—mostly cattle, but also sheep, goats, horses, and pigs. With auctions sometimes lasting all day and into the night, sale barns often house a restaurant or concession stand to feed their employees and customers.

Most stockyard cafés open only on sale days, typically once a week, but a handful around the state open daily and cater to the general public too. For travelers passing through town, stockyard cafés offer a comforting stop for downhome cooking, a chance to rub elbows with local characters, and a glimpse of the agricultural roots so deeply entwined with Texas heritage.

“In your agriculture communities, the café at a sale barn is the hub, a center for livestock men and ranchers and agriculture people to sit around and converse back and forth and see what’s going on in the market,” says J.R. Hudson, a Texas Animal Health Commission inspector and a regular presence at Producers Livestock Auction Co. in San Angelo, which hosts the largest sheep and goat sale in the country. “It’s an important part of the community.”

Farmers and ranchers have long traveled to town to buy and sell livestock, but as beef became big business in the 19th century, ranchers started trailing their herds to regional stockyards and railheads in places like Fort Worth and Kansas City. Meatpacking plants developed around the stockyards, where buyers purchased full-grown cattle for slaughter. The cattle business shifted in the 1950s and ’60s with the development of the feedlot industry in places like the Texas Panhandle. It became standard for ranchers to sell their calves to feedlots, which would then fatten the calves and sell them to slaughterhouses. Local auction barns developed as venues for ranchers to sell their calves. Today, about 80 percent of Texas cattle are sold through auction markets, says David Anderson, a professor and extension economist with Texas A&M University.

“The auction is a central location for buyers and sellers to come together, and you have a competitive bidding auction for the ranchers’ calves,” Anderson says. “It really serves a pretty vital function. If we used a modern term, we’d call them aggregators.”

The players in this part of the cattle business fuel up in stockyard cafés—family ranchers, buyers representing feedlots and other ranchers, truck drivers, veterinarians, cowboys, stable hands, and brand inspectors. Judging by the café menus, these folks like country cooking—hearty bacon-and-egg breakfasts, rib-eye steaks, pork chops, hamburgers, potatoes, chicken and dumplings, pot roast, fried catfish, and such. Ask the cook at any of these restaurants what their most popular dish is and one answer prevails: chicken-fried steak. (By the way, because the cafés order their meat from food distributors, there’s not necessarily a direct link between the animals sold at auction and the meat served in the restaurant across the hall.) 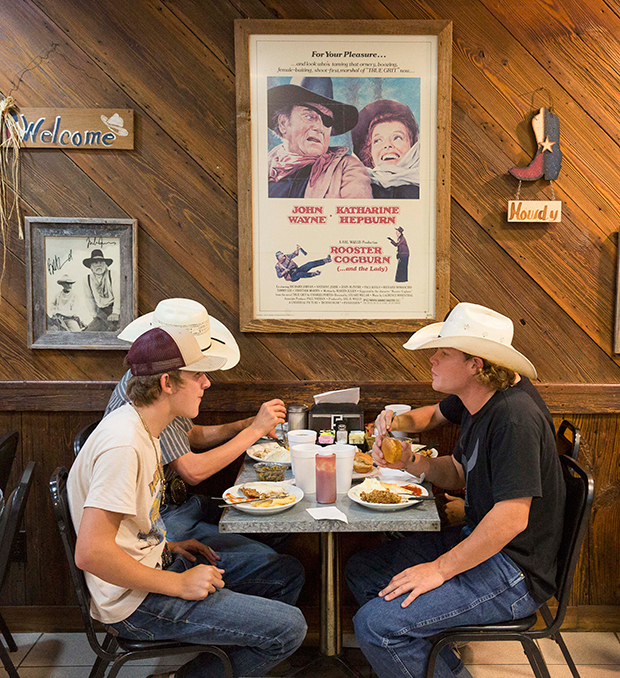 Mealtime at the West Strockyard Cafe.

Juan Leal learned how to cook on the job at the Stockman’s Restaurant at the San Angelo sale barn. He started as a 17-year-old dishwasher 24 years ago and now helps run the place. “We all know everything about each other,” Leal says, pointing around the restaurant and naming the diners at each table. “You get to sit down and visit with them. We get to know all about them, their kids, where they work, where they retired from.”

Charlie Blanek, who owns the Stockman’s Restaurant, also owns the Dun Bar Restaurant, located about a mile away, a diner that his father opened 58 years ago. So what’s the difference between running a stockyard restaurant and a regular restaurant?

“Down at the Dun Bar, everybody wants to buy everybody’s lunch,” Blanek says. “It may be the same people, but up here, it’ll all be separate tickets. They don’t want to show any weakness. It’s all business, you know. If they can buy something for a couple of pennies cheaper a pound, well, they get it done.”

Speaking of business, the stockyard cafes also serve as informal sideline markets for cattlemen and buyers looking to fill orders. “A lot of phone calls are made right here. It’s kind of like a golf course for a different kind of business,” notes Hudson, who arrives early on sale days to inspect incoming animals for diseases and then eats breakfast at the Stockman’s with a copy of the San Angelo Standard-Times.

Of course most of the trading takes place at the auctions, which are held in small arenas with bleachers, a dirt-floored ring for displaying animals (sold by the head or pound), and an auction block above the ring where the auctioneer directs the proceedings. Hardworking yard hands funnel the animals from outdoor pens through chutes, where some are weighed, and then herd them into the ring. The auctioneer announces a starting figure and rolls into that familiar continuous auction patter as he tries to escalate the price among the buyers, who motion subtle hand signals to make bids.

At mealtimes, café waitresses filter through the crowd to take orders and deliver plates to buyers who don’t want to miss a moment of the bidding. The auctions are open to anybody to observe, and visitors can also head outside to explore the catwalks that extend over the livestock holding pens.

Few people know their way around an auction barn as well as Lawson Alford, 75, a cattle dealer who lives in Turkey and attends three auctions weekly in the Panhandle. On Mondays, you’ll find Alford at the Amarillo Livestock Auction, which opened in 1935 and sits along the railroad tracks in an industrial area of Amarillo’s east side. Alford, whose father worked at the Amarillo stockyard, sold calves here during his high school years.

“The breakfast here is always good; I like the ham,” says Alford, as he takes a seat at the Amarillo Stockyards Café, located inside the auction building. “There’s always been a group of people who come here, not just cattle people. It’s bankers, insurance people, salesmen, truckers. If they’ve got good food and good service, people come.”

Missy Treadway has run the Amarillo Stockyards Café since 2013, and she worked for the restaurant when her mother owned it from 1990 to 2002. Photos on the café walls reflect the cattle-ranching roots of Treadway’s family: a sepia-toned picture of her grandparents and their cabin on the rim of Palo Duro Canyon, and images of pastoral scenes from family members’ ranches.

“This is all we have done our entire lives,” Treadway says.

Along those lines, neither Treadway nor her late mother tinkered much with the café menus they inherited. “It’s basically been the same since there’s been a restaurant here,” she says. “We keep the basics because that’s what people are looking for—the chicken-fried steak, the rib-eyes.”

The stockyard cafés that stay open throughout the week rely largely on customers who aren’t in the livestock business. Set against a backdrop of a dense East Texas forest, the Cattle Barn Restaurant at the Anderson County Livestock Auction in Elkhart draws plenty of regulars who are more interested in the restaurant’s daily buffet specials than buying or selling cows. In a back corner of the wood-paneled dining room, Gary Wynne hangs out at a table labeled with a sign reading “Reserved for grumpy old men.” 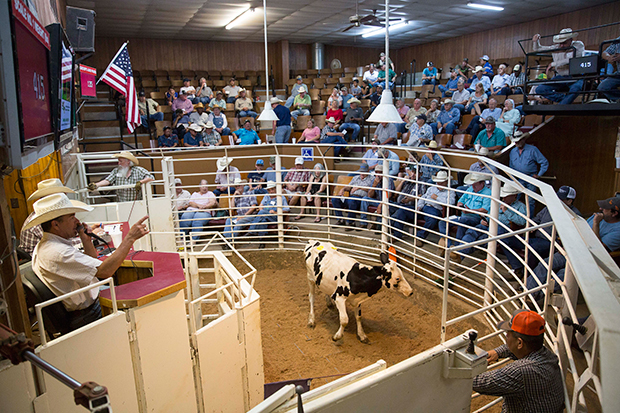 Wynne has been visiting the Cattle Barn almost daily since he retired from running his own barbecue joint in 2006. At one point, he started helping out when the restaurant’s two employees got busy. Now he pitches in regularly, folding napkins, brewing tea, and wiping down tables. He takes his payment in meals, which the restaurant serves buffet-style. Particularly popular are chicken-fried steak Wednesdays and fried catfish Fridays.

“It’s mainly to get away from the house, you know,” says Wynne, who wears a baseball cap from one of his former businesses, Handyman & Honey-Dos. “If I stay at the house all the time, I get depressed. So I come here to help out and talk to my friends.”

Friends and family also run deep in West, where the red-and-tan West Auction Inc. building sits on a rise along Interstate 35, a familiar sight for drivers. Along with cattle auction customers, the West Stockyard Cafe is popular with truckers because of its interstate access and large parking lot. “One trucker told me it’s the best place to stop between the Rio Grande and the Red River because you can go downhill both ways from this location,” says Ted Uptmore Sr., who owns the auction barn and the restaurant with his wife, Adele. The Uptmores four sons all contribute to the operation of the auction barn, as do some of their grandchildren.

Inside, the West Stockyard Cafe features a small dining room with an old-fashioned counter with five stools. A signed photo of Robert Duvall and Tommy Lee Jones duded up in their cowboy gear from Lonesome Dove contributes to the Old West atmosphere of the cafe, which sits near the route of the historic Chisholm Trail. The cowboy scene feels most authentic on Thursdays, when cattlemen show up before the start of the cattle auction for lunches of roast beef, shepherd’s pie, and barbecue sausage.

Waitress Joyce Gregory has worked at the West Stockyard Cafe for 17 years, though she only works two days a week now, her free time spent helping care for her grandchildren. Gregory is all business when it comes to making sure her customers have what they need. And she keeps a close eye on the food that the cooks place in the kitchen window.