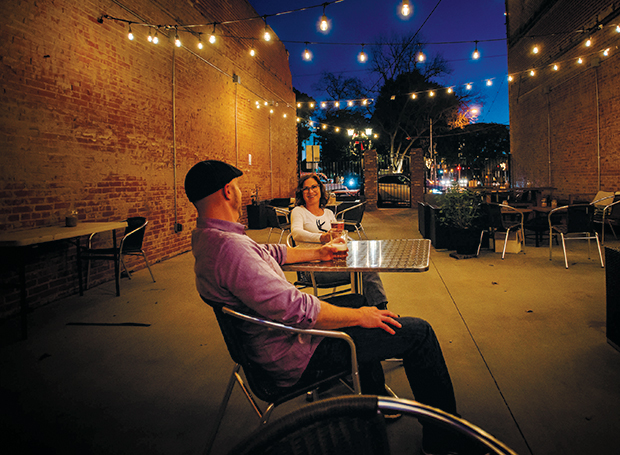 As the craft-beer movement explodes in the Lone Star State, well-made beers are originating beyond Texas’ major cities and long-established small-town breweries. This is particularly evident in East Texas. Beer-lovers seeking new breweries to explore should drive 90 minutes east of the Dallas/Fort Worth Metroplex, or a few hours north from either Austin or Houston, to visit three breweries separated by just 60 miles of tree-shaded roads.

Come and Take It

Athens’ Come and Take It is a one-stop shop for beer and gourmet foods. Read more about its success.

In Tyler, friends Ryan Dixon, Stephen Lee, and Dan Griffith founded True Vine Brewing Company in 2011 after several years of experimentation in Dixon’s garage. The microbrewery shares space with a mechanic’s shop in a squat brick building not far from Texas 31, in what Dixon calls a “forgotten neighborhood” that’s ripe for new energy. In fact, only a silver sign with the True Vine logo—a collage representing water, barley, hops, and carbonation—gives away the building’s identity.

True Vine sold its first kegs in the Tyler market in 2014, and a few years later has created enough demand in Tyler and beyond—including restaurants in Dallas, Longview, and Canton—to invest in bigger and better equipment to expand.

“One of my inspirations for True Vine was a book titled The Search for God and Guinness,” Dixon says. “It’s a biography about the Guinness family and their philanthropic heart and positive impact on their community.
Before True Vine was officially formed, my desire was to do what they did here in Tyler, creating great beer and community.”

And he and his partners have done that. The brewery opens for tours and tastings on Friday and Saturday nights, and especially shines on the last Saturday of every month, when True Vine opens its doors to the public for a family-friendly event called Open Taps, held both in the brewery proper and on the shady lawn known as The Backyard. Here, a wooden stage hosting live music contributes to the casual feel of a neighborhood house party where everyone’s chosen to gather outside.

Early in the evening, before Open Taps’ live entertainment begins, a DJ mixes contemporary tunes with chestnuts from the ’80s and ’90s. Young couples, groups of friends, and families sit at picnic tables distributed throughout the yard’s expanse, or lounge around the periphery in camping chairs brought from home. Nearby, friends deftly string up hammocks between pairs of sturdy trees. Kids wait in a short line with their parents for True Vine’s non-alcoholic root beer, while other children scamper up a hill at the edge of the property.

Inside, beer-lovers line up at the bar to exchange wooden tokens (two are included in the $10 admission fee) for a Rose City Pale Ale made with rose hips, a blonde ale called Mermaids & Unicorns, or a coffee porter with a complexity miles beyond what you’d expect to find in the heart of East Texas.

“Beer is an equalizer,” Dixon says. “No matter who you are, what you look like, your status, or what you’re going through, beer puts us all on the same level and real conversations can happen.”

Tyler’s not the only East Texas town aiming for community through good beer. Drive 35 miles west from Tyler on Texas 31 and you’ll reach the town square of Athens, home to the new Athens Brewing Company, which does business in a three-story brick building that dates to the 1800s. Last September, the brewery held a grand opening party to herald the launch of its gastropub-style menu and pet-friendly courtyard, which doubles as a cozy live-music venue most Saturday nights. The brewery and restaurant open Thursday through Sunday for tastings, plus dining at lunch and dinner.

“The food is designed with the beer in mind,” says A.J. Campbell, one of the two principal brewers for Athens Brewing, noting they’ve created beer-based mustard, marinades, and even salad dressing for a menu that includes sliders and coffee-rubbed chicken wings.

The beer is adventurous even by craft-brewery standards. Two of its best-known beers are an apricot ale (which features the fruit judiciously, only hinting at sweetness) and its Piney Woods Double IPA, which skillfully combines hops with sage and juniper to impart an unusual but satisfying evergreen essence. They’ve also created what they playfully call an F Bomb IPA, and their black IPA surprises me with a malty, smoky flavor and a body that’s much lighter than its ebony color suggests. 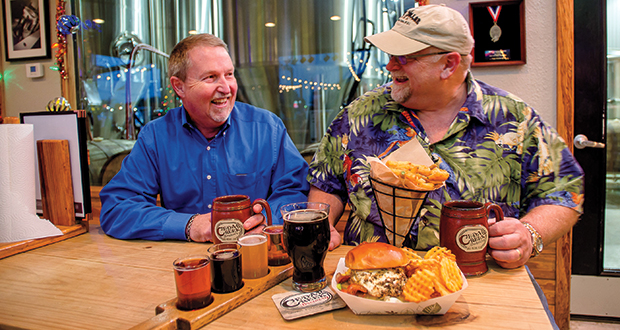 Cedar Creek Brewery in Seven Points has a restaurant, taproom, and outdoor biergarten.

Northwest of Athens at an outpost called Seven Points, you’ll find the region’s best-established brewery, Cedar Creek Brewery, which dates to 2012 and now distributes its beers throughout Texas and into five other states. Guided tours on Saturdays highlight the brewery’s canning machine and recently upgraded tanks, but most visitors are more interested in how the beer tastes. Thanks to Cedar Creek’s restaurant, taproom, and outdoor biergarten (all open Thursday through Sunday), beer-lovers have plenty of opportunity to sample some of the eight beers typically on offer.

The taproom serves a five-beer flight option for those who want to experiment. Among the standbys worth investigating: The slightly tart Lawn Ranger Cream Ale, the Weize Ass (a lemony and light Hefeweizen that drifts into saison territory), and the Dankosaurus IPA, with pine, citrus, and tangerine notes.

Co-owner Jim Elliott, who first thought about creating a brewery when he moved to the region in 2008, notes that some East Texas cities and counties were dry until recently, and changes in the laws have helped expand the market for craft beer. “We’re not interested in making beers that everyone else makes. Quality’s most important to us, but we also try to do things a little differently.”