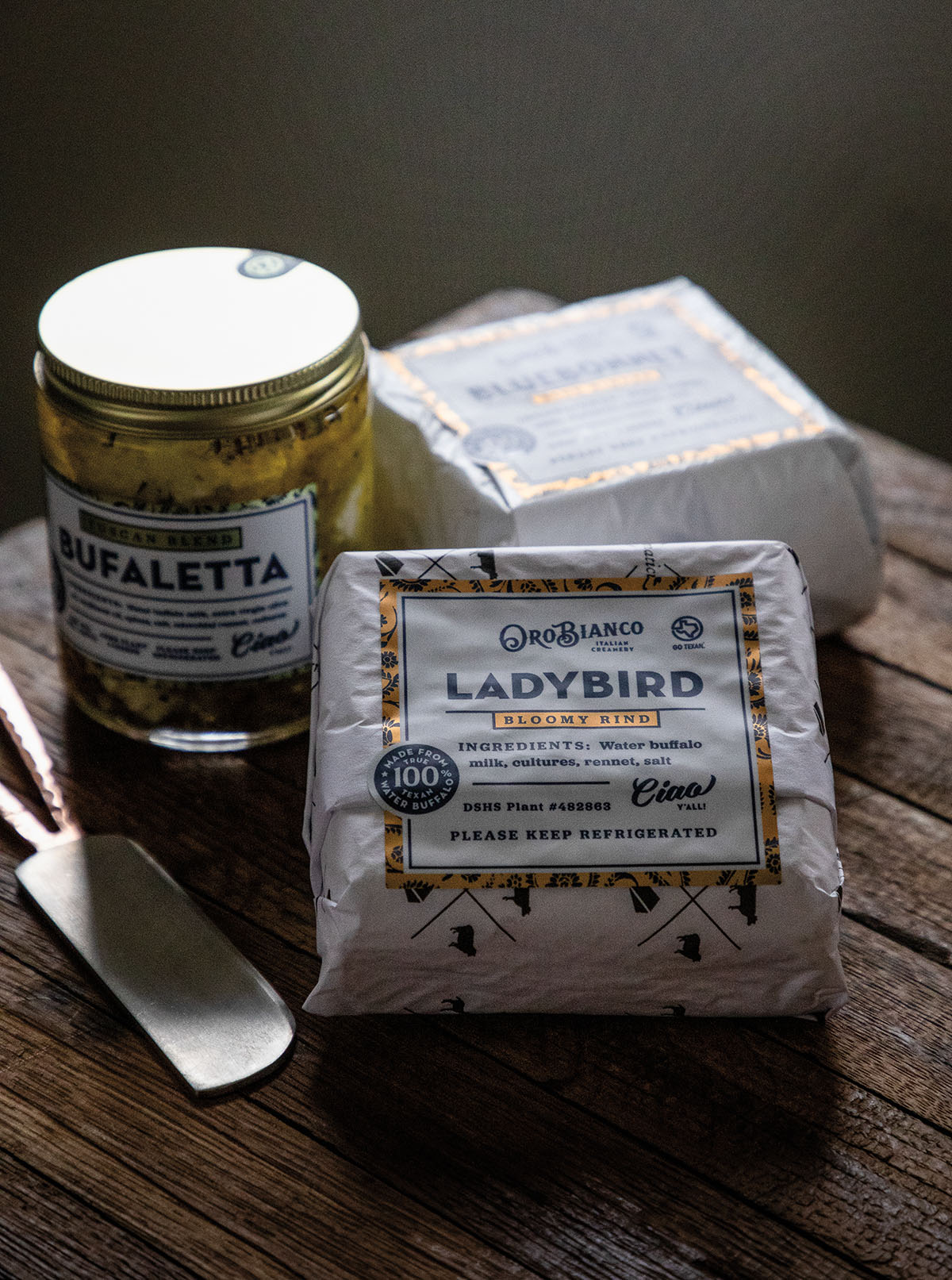 Buffalo Milk is made into a variety of rich cheeses at OroBianco.

Texas’ only water buffalo dairy was conceived, perhaps unsurprisingly, after a few drinks. In 2017, Phil Giglio was at a bar, dreaming of leaving his corporate law job in Chicago to craft artisan water buffalo cheese—a Southern Italian staple originating in Campania, where Giglio’s family is from.

“Buffalo is known as ‘the queen of milks,’” Giglio says. The milk’s high protein and butterfat content make it efficient for cheesemaking. Particularly when it comes to fresh and soft cheeses, buffalo milk typically yields more cheese than cow or goat milk.

Two years later, the dream that started out scrawled on a cocktail napkin became reality. After moving to Texas from Chicago, Giglio reached out to Peeler Farms in Floresville to form a partnership after learning rancher Jason Peeler kept several water buffalo. “I’d acquired them from an acquaintance and was struggling to find a use for them,” Peeler says. “It was kind of like getting stuck with a kid’s Shetland pony.”

Over the next three years, Giglio worked on obtaining the necessary permits and overseeing recipe development while Peeler established a top-bloodline water buffalo herd and built a milking parlor. In March 2021, Giglio opened OroBianco Italian Creamery in Blanco. The retail shop sells the company’s farmstead salumi, gelato, cheese, and other buffalo milk products, most of which contain ingredients sourced from the Hill Country.

“We’re very much a Hill Country company,” Giglio says. “The Blanco location is a merger of small-town Texas and the Italian concept of slow food.”

Giglio was raised on a New York farm that once belonged to his great-grandfather. In his 20s, he moved to southern Italy, which helped shape his culinary philosophy. Living in Praiano, a fishing village on the Amalfi Coast, he reveled in Italy’s relaxed food culture and caseifici, cheese shops peddling local offerings. 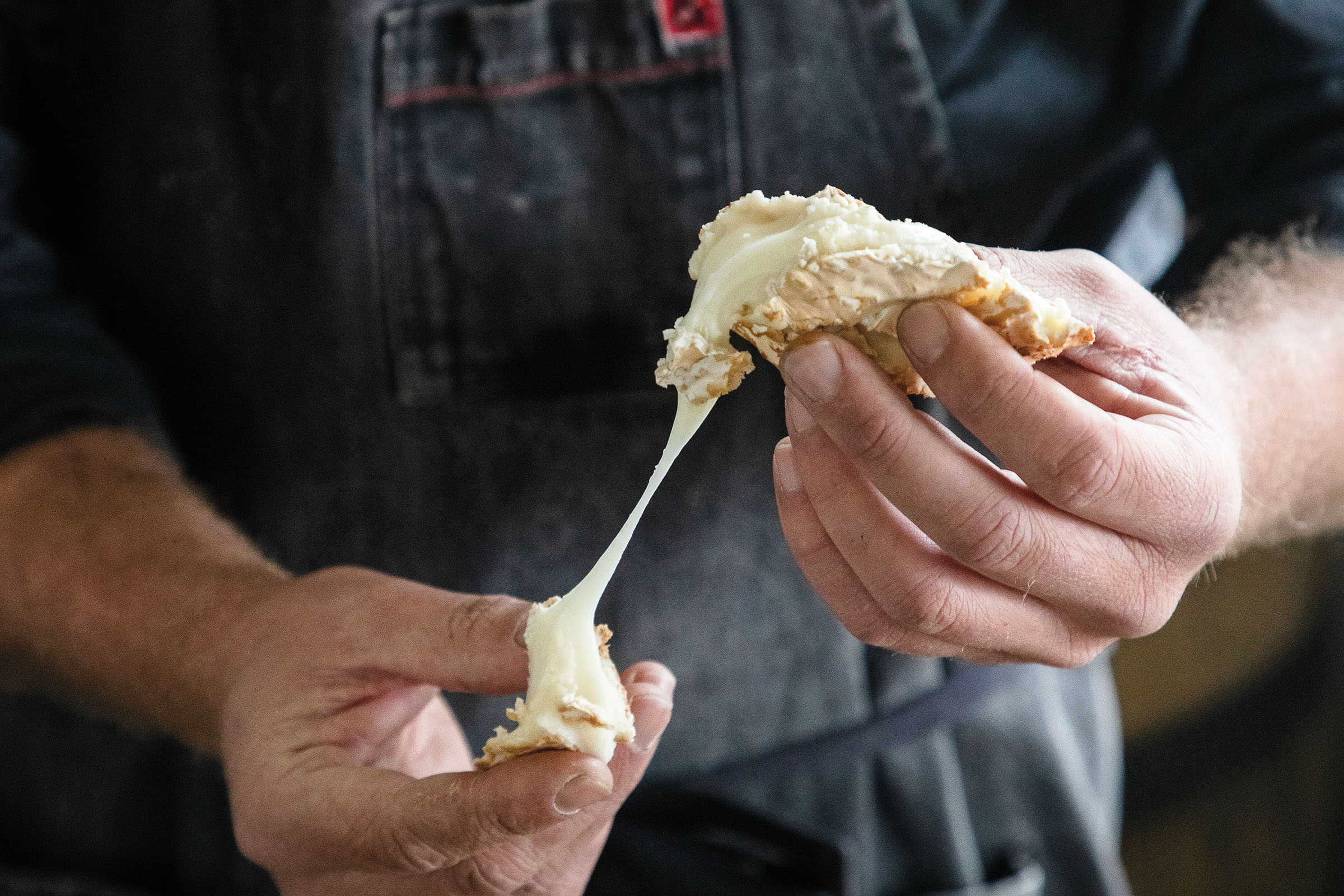 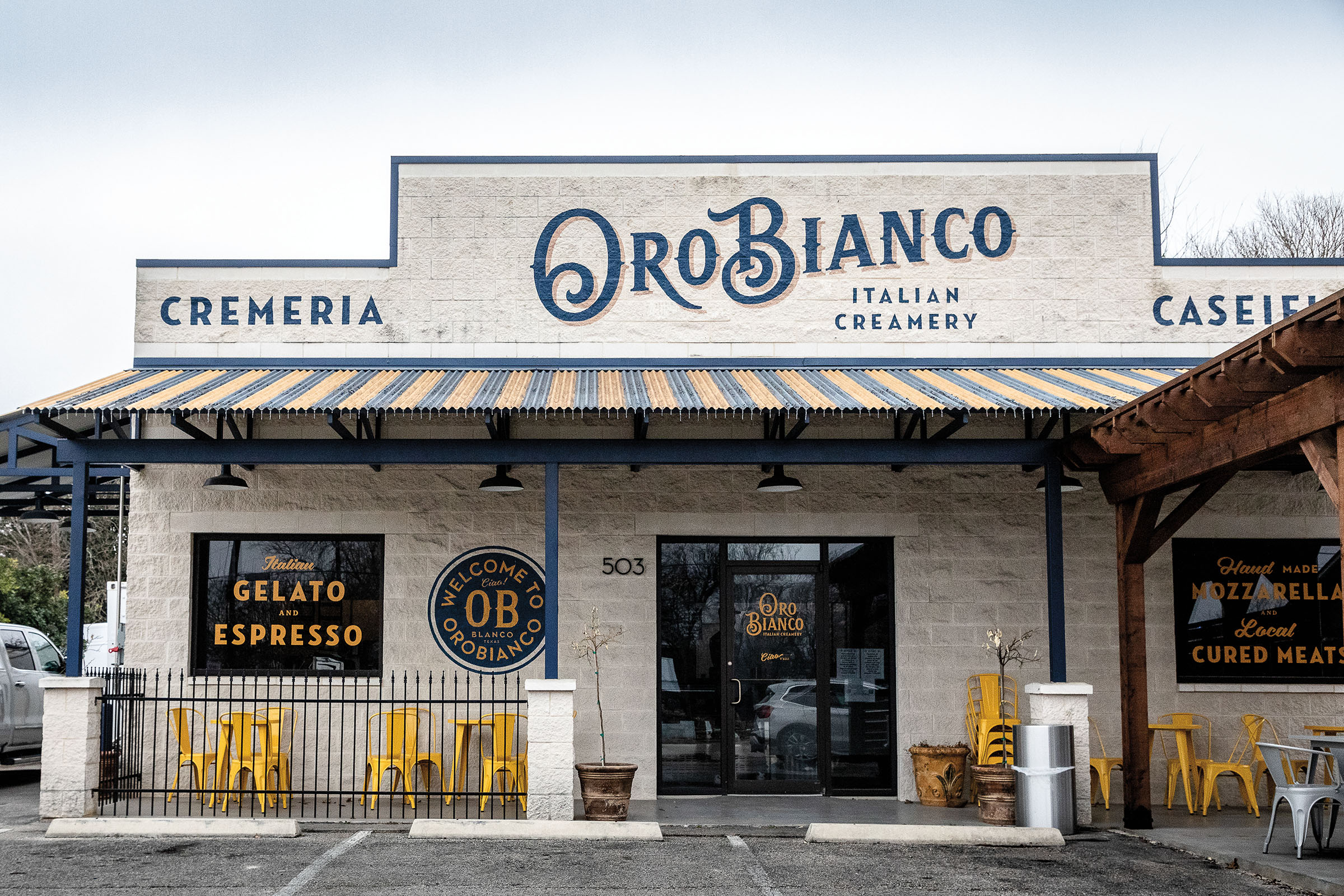 “It was probably the most pleasant period of my life, and anything that reminds me of that experience—the scent of lemons, buffalo cheese—has my heart,” he says. “I have such a connection to those things and knew that I wanted to find my way back to being around agriculture.”

Many of OroBianco’s products, including the duck eggs used in the decadent citrus crema gelato, are derived from animals raised on Peeler’s and Giglio’s ranches. “Farmstead food production offers the ultimate quality control,” says OroBianco partner and head cheesemaker, Adam Thompson, who has his own herd of goats.

Land stewardship is equally imperative: The 200 head of water buffalo graze on rotational pastures (supplemented by seasonal forage), as do the wagyu cattle that comprise the majority of Peeler’s operation. “We’re able to know what our milk and meat supply is like and scale accordingly, as well as what our livestock are eating and, most important, how they’re treated,” Giglio says. Buffalo require a water or mud supply in which to wallow, which allows them to cool off, prevent sunburn, and ward off insects. Sheep and Berkshire pigs also live in the pasture; the latter’s diet is supplemented by the leftover whey from cheese and gelato production.

Where the Buffalo Roam

Water buffalo are native to China and South and southeast Asia, where they assisted with rice cultivation because their broad hooves keep them from sinking into marshy soil. While wild numbers are in decline, two domestic subspecies—­river and swamp water buffaloes—are commonly used for labor, meat, milk, and hide. Water buffalo were first introduced to southern Italy in the second century. Today, buffalo milk, cheese, and other dairy products are made in various regions of Italy, as well as parts of Eastern Europe, South America, and Asia. The mild meat, which is similar to beef but higher in protein and lower in cholesterol, is also popular.

OroBianco acquired its first dairy water buffalo, with Italian genetics, from established farms in Texarkana and New Jersey. Calves are separated from their mothers at one week old and bottle-fed milk replacer. “Hand-rearing the calves also makes for gentler, safer animals,” Peeler says.

The 40 cows are milked once a day in the 17-stall milking parlor, and each animal yields approximately 5 liters of rich, creamy milk, which will in turn make 5 pounds of cheese.

“I’m throwing my goats under the bus,” Thompson says, “but buffalo milk is like going from a Volkswagen to a Cadillac.” 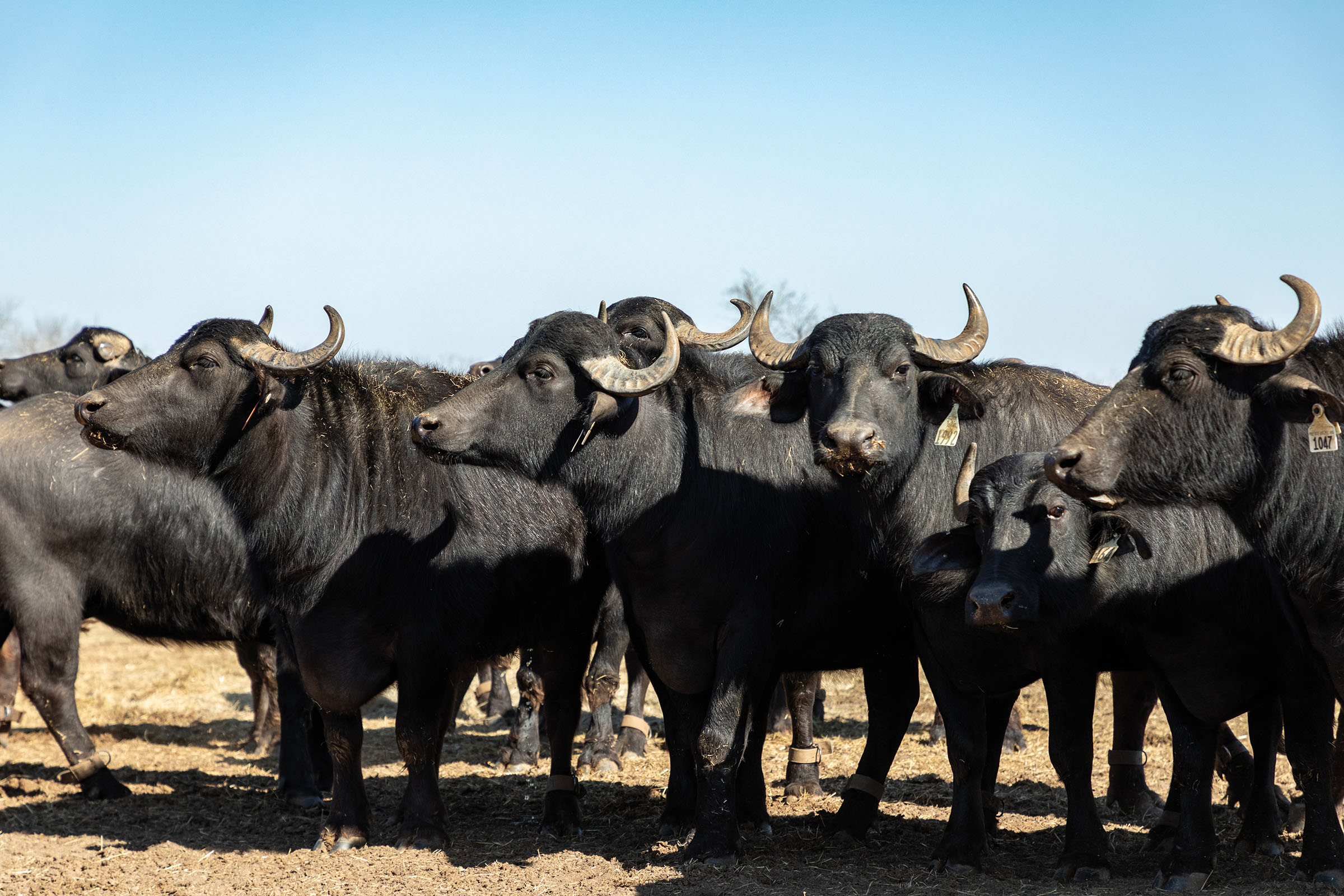 Peeler admits he’s still learning about water buffalo. “They’re highly intelligent with very individual personalities and certain behavioral traits that differ from cattle,” Peeler says. “For example, they bunch together when startled, instead of scattering the way cows do.” Cattle can be picky eaters, but water buffalo are willing to ingest poor quality roughage “while still producing high quality milk,” Peeler says.

For a farmstead dairy operation to be fully sustainable, it requires a purpose for retired cows and castrated calves, or steers. OroBianco’s salumi program has made it possible for the company’s products to come full circle. “Because Phil’s background isn’t in ranching, my job has been to morph his vision into reality, so that we can produce a truly local food product,” Peeler says. 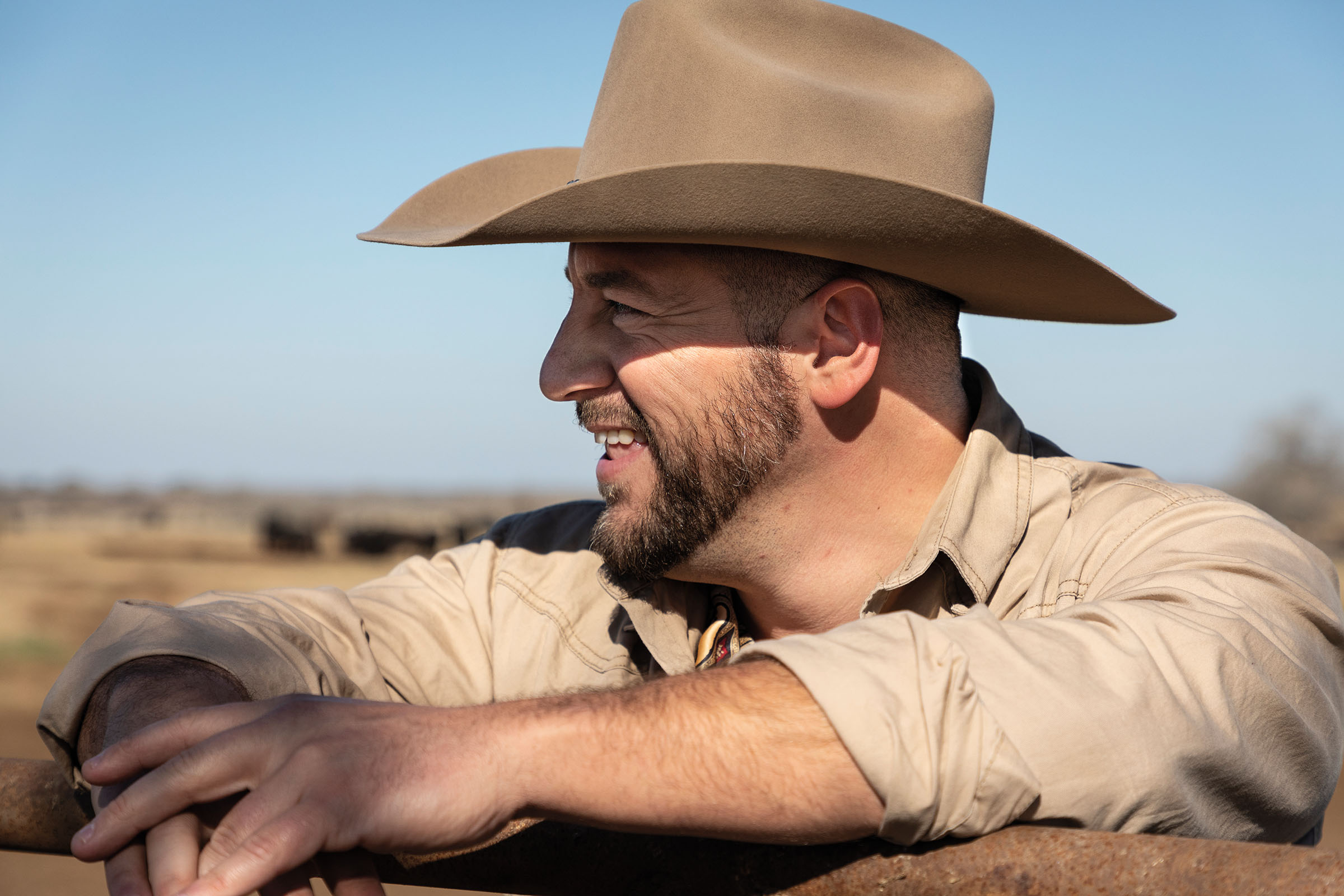 Peeler’s ranch has its own USDA-­certified packing plant, where the steers are slaughtered between 18 and 20 months of age. The meat is then sent to The Salumeria in Austin, where owners Anthony Pedonesi and Gerardo Garcia turn it into private label products like coriander-spiced pork and water buffalo cacciatore, a flavorful “hunter’s style” sausage; water buffalo-fig salami; and wagyu and water buffalo bresaola (air-dried, salted meat). “We absolutely love the buffalo,” Pedonesi says. “It’s a beautiful, lean red meat, which is why we mix it with pork. But we’re also big fans of OroBianco and Phil’s vision. His ability to bring ideas to life is inspiring.”

While the mozzarella was in development, Giglio decided to focus on gelato for the shop’s opening. “I was making gelato all night and practicing law by day,” he says. All of the components, like nut butters and marshmallows, are made in-house for seasonal specialties like Fredericksburg peach, strawberry-­stracciatella, Rocky Road, and safflower-blood orange. “On hot days, there’s a line out the door,” he says.

Thompson also makes seasonal cheeses like buffalo scamorza, which in southern Italy is made with cow’s milk and smoked using straw. He collaborated with OroBianco’s retail manager and former pitmaster Dan Wright, who smokes the dense orbs of cheese over mesquite. “We’re trying to pull from southern Italy aspects that make sense in Texas,” Giglio says.

The newest addition to OroBianco’s lineup is a coffee bar located in the shop, where customers can request buffalo instead of cow’s milk. A stand-out is the thick, ultra-rich drinking chocolate. The single-origin chocolate, which variously comes from Indonesia, Madagascar, and Vietnam, is also used in exquisite chocolate bars made in-house—the cacao beans are roasted, pulverized, and combined with dried buffalo milk.

Two retail shops will open later this year, one in Stonewall and one in Fredericksburg. The latter features a 13-seat salumi bar so customers can have an in-depth experience with the food. That experience “fosters an understanding of the true cost of agriculture and the care that goes into every step of this business,” Giglio says. “Seeing an objectively crazy idea like OroBianco come to fruition—the reception has been better than I could ever have anticipated.”