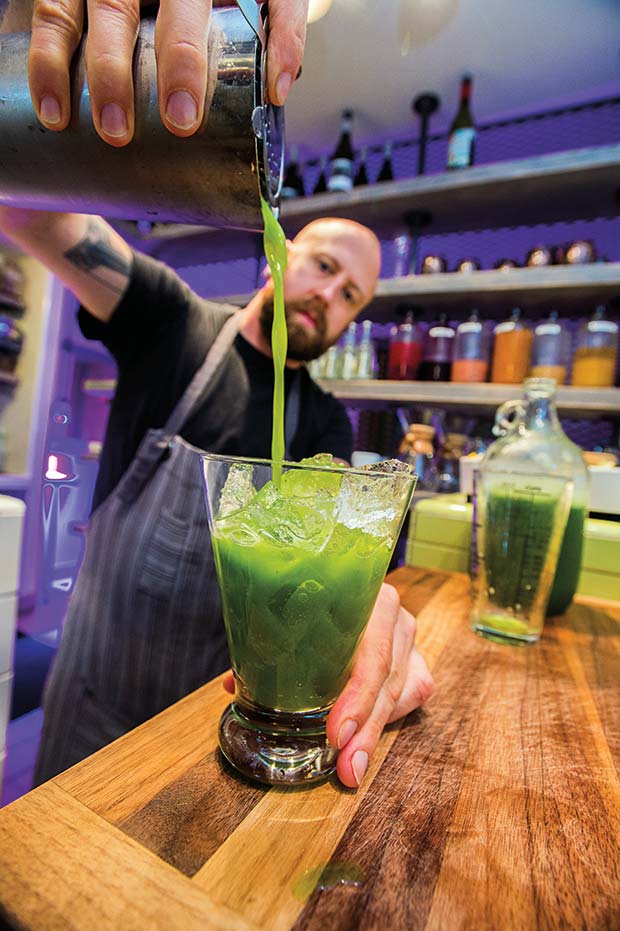 This is the most delicious thing I’ve had to drink at breakfast, or maybe ever,” says my friend Leslie, pointing to her tall glass filled with ice, fresh mint, a pineapple drinking vinegar, and seltzer water. It’s one of the specials on the blackboard at Righteous Foods, where I’m joining her for Friday-morning breakfast.

Settling into a bright orange chair at a sturdy table crafted from reclaimed wood, I spot apricot as an option on that same specials board, and soon I’m parroting Leslie’s sentiments: The fizzy beverage provides both tang from the coconut vinegar and sweetness from fresh fruit juices cold-pressed on site daily. Combined with a little sparkling water, the blend delivers a burst of all-natural refreshment unlike anything else I’ve found in Fort Worth.

That we’d be gleefully quaffing vinegar would have surprised both Leslie and me in the past, but today we’re among those who eagerly keep the tables at Righteous Foods in Fort Worth’s Cultural District filled at morning, noon, and night. The appeal of food and drink that’s equally flavorful and healthful has us hooked on the organic, restorative goodness that owner Lanny Lancarte stocks on the Righteous Foods menus.

Lanny, who transformed his former upscale restaurant, Lanny’s Alta Cocina Mexicana, to this casual place last fall, shifted his personal focus to nutrient-dense food and drink when he embraced a more active lifestyle a few years ago. But because he’s a classically trained chef with a degree from the Culinary Institute of America in New York, he couldn’t forsake his passion for tasty things that both gratify and intrigue the taste buds.

“When I went out to dinner, there was nothing ‘unleaded’ that I found interesting. Choosing between sparkling water or nothing got old,” says Lanny. “So I started creating drinks with real ingredients, like fruits and herbs, sans liquor.”

He soon created a menu of “mocktails” for Alta Cocina that became an instant hit with guests who were pregnant or opting not to consume alcohol for other reasons. Soon, he was experimenting with cold-pressed juices and drinking vinegars, which found popularity with his bicycle-racing and yoga-enthusiast friends.

Energized by the response, Lanny overhauled his restaurant according to his new life model, brightening the space with splashes of orange and green and adding an abundance of potted cactus to the décor, inside and out on the breezy patio. In October 2014, Lanny opened Righteous Foods with a hefty roster of nutritious breakfast, lunch, and dinner dishes, along with a wealth of fabulous beverages that make both palate and body hap-py. (Of the lunch and dinner offerings, one of my favorites is the kale salad with blackened salmon and cashew dressing; for breakfast I love the waffles with dark chocolate, bananas, and flaxseed.)

“I didn’t know if Fort Worth was going to be as hungry for all of this healthy stuff as I was, but we had lines out the door for a few weeks,” Lanny says, noting that his staff hustles to keep up with the 500 people Righteous feeds on a busy Saturday. “We’ve easily quadrupled our business since we opened.”

Clearly, there’s an audience keen on conscientious consumption these days, particularly if recovering from lapses into unhealthy food and drink choices. The Righteous Foods menu says it all, up top, in the Drink section: Detox and Retox. Under the Detox section are cold-pressed juices, freshly squeezed liquid versions of organic fruits and vegetables. Two kitchen helpers dedicated to juicing come in after midnight and use two juicing machines like those employed in the home kitchen, making three to four gallons an hour.

“It’s labor intensive, and we run out of juices at the end of every shift, so we keep two people on the juicers at several times each day,” Lanny says.

Among my favorites is the Botanist D-Lite: Spinach gives the drink its rich emerald color, while cucumber and Granny Smith apple provide tart coolness, and mint and lime provide sparkly kick. A runner-up is grilled-lavender lemonade, a blend of fresh lemon juice, lavender simple syrup, organic cane sugar, and a caramelized lemon wheel.

Apothecary jars lining a wooden shelf behind the green-and-white-tiled bar contain a Technicolor array of drinking vinegars, concoctions also known as “shrubs.” Each holds a blend of mild-tasting coconut vinegar and a smidgen of cane sugar with fresh, cold-pressed fruit such as blackberry, apricot, mango, and pineapple.

Persuading guests to wrap their heads around the idea of drinking vinegar was easier than you’d think, Lanny says. “When I explain that shrubs are a healthy alternative to soft drinks—which we don’t carry—and we get people to taste one, they realize they’re really good. The shrubs aid in digestion by helping to break down your food, and they give you the sensation that you’re a little more full than you are.”

Guests still wishing for a little more pizzazz in their nutritious drinks delight in Righteous Foods’ “retox” side of the beverage menu. Cocktails made with organic liquor components include my top pick, the Blackberry Gin Fizzle, blending organic gin, lemon juice, blackberry vinegar, and seltzer water. Lanny’s riff on the popular
Moscow Mule is his Burro de Culiacan, a mix of organic tequila with organic ginger liqueur, fresh grapefruit juice, and a splash of seltzer, served in
a copper mug.

Shifting to this healthier way of sipping seems not only easier, but righteous. As Lanny states as his motto on the menu, his offerings are “good for the body, good for the soul.” I’ll drink to that.