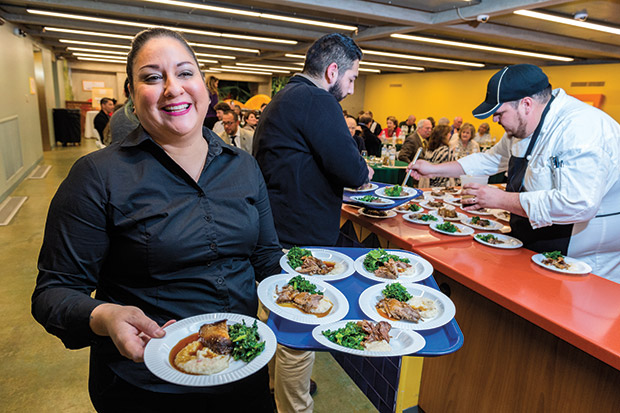 In a demonstration kitchen within shouting distance of Davy Crockett’s fiddle, a 650-pound purple amethyst, and circus memorabilia from the 1920s, San Antonio’s 90-year-old Witte Museum hosts a series of dinners complete with wine, beer, or cocktails from such spots as Comfort’s Bending Branch Winery and Stonewall’s Pedernales Cellars. Since its debut in summer 2014, the Salud! Culinary Nights program has presented more than 15 dinners and has secured a spot in the regular date-night repertoire of many adventurous Witte fans.

Salud! Culinary Nights at the Witte Museum For a schedule of dinners and themes, along with information about permanent and temporary exhibits and a timeline of the upcoming expansion plan, see www.wittemuseum.org.

“We’ve gone to almost every one so far,” says San Antonio firefighter Dean Solis. “It’s a very personal experience, with chefs explaining their process and taking questions. And it’s interesting because there are people from so many walks of life breaking bread together.”

“It’s a great date night for us,” adds Solis’ wife Kristen, “a chance to relax and learn on a Wednesday night with local food and drink.”

If you’re surprised by culinary-related programming within a museum whose past laurels have rested on its exhibits of science and natural history, you’re not alone. When I read about last August’s Bug Dinner, which promised a “unique entomological culinary experience” via a three-course meal using insects, I wondered if it was a joke. But this imaginative collaboration with local chefs and Archeology Curator Harry Shafer turned out to be one of the most interesting evenings I enjoyed all summer. And there’s much more to come: The Salud! Culinary Nights program is but one part of an ongoing expansion plan that will extend both the museum’s programming reach and its physical footprint over the next few years.

“We tapped into San Antonio’s growing culinary scene to bring conversations about food into the evening,” says Kim Biffle, the museum’s vice-president of external affairs. “About four years ago, when we started to reimagine the old H-E-B Science Treehouse, we realized a need in our community to talk about healthy lifestyles and attainable wellness, as well as moderation in everything. We said, ‘Let’s have a night for adults, when we can embrace our local culinary artists and promote education.’”

Now, while I don’t eat bugs (on purpose anyway) on a regular basis, this Bug Dinner wasn’t my first insect rodeo. A grade-school encounter with edible ants had led to a peculiar fascination with spicy Oaxacan grasshoppers in adulthood, and in fact two months before the Witte’s six-legged culinary throwdown, I had met my friend Larry Seaman for some daredevil snacking at the 8th Annual Bug Eating Festival in Austin.

“It’s a good thing you’re here early,” said a vendor at the event, offering samples of edible crickets and mealworms. “Because once the kids get here, it’ll be packed. Kids love to dare their parents to eat bugs.”

I didn’t have to dare Larry, a teacher, who placed a few crispy mealworms on his tongue while I snapped a photo. “This will win me lots of points with my students,” he told me with a grin.

And while change may indeed start with children, the actual Bug Dinner at the Witte, like the more traditional Culinary Nights programming, is open only to adults. Led by Chefs Stephen Paprocki and Ernest Lopez of San Antonio’s Eilan Hotel, a team of local chefs served spinach salad with mixed hymenopteran larvae, mealworm-sprinkled pizza, and chocolate cricket cremeux (think fancy pudding) served with black ants and tamarind sorbet—all paired with beers from Houston’s Karbach Brewing Company. Most of the chefs belong to a nonprofit called the Chef Cooperative, whose members work to support local farmers via regular dinners and collaborations such as these events at the Witte. “For the chefs, it’s like being on live TV,” says Chef Jeff White, a frequent collaborator and the garrulous jefe of San Antonio’s Boiler House restaurant. “As for the guests, they come to learn, so they pay attention and ask questions.”

So while we sampled our mealworm pizza and commented on the play of textures in our larvae-garnished spinach salad, we learned from archeologist Harry Shafer how the hunter-gatherers of the Lower Pecos made use of ants, grubs, grasshoppers, and other insects for nearly 10,000 years. A major exhibit about the Lower Pecos region—a swath that extends from Del Rio to Sanderson and down into the rural mountains of Mexico—will open in 2017 in a new building at the Witte, but Shafer gave us a preview while we expanded our palates.

“To the hunter-gatherers of some 4,000 years ago, the Chihuahuan Desert was a veritable garden,” he told us as we sipped and supped. “How do we know about their diet? One of the things we have in the Lower Pecos are these wonderfully preserved archeological deposits in rock shelters or caves high above the river. Some of these sites contain preserved organic material going back 9,000 years, but the most valuable artifacts we find are dried human feces. Through the analysis of these coprolites, we know what people were eating—agave, sotol, lechuguilla, prickly pear, mesquite beans, wild hackberry, and many, many insects.”

As I enjoyed another tart and spicy spoonful of my ant-studded sorbet, I thought to myself, “Is entomophagy (the practice of eating bugs) the future?” Will the idea fly? Will it take wing? Will the buzz continue?

“We know of at least 2,000 insect species in recorded history that have been eaten, but that’s probably the tip of the iceberg. Insects are high in protein; require less land, water, and feed to raise than cattle; and are ethical to harvest,” she told us. To prove how nutritious bugs are, Curry embarked this past fall on a successful two-week, insect-fueled climb of El Capitan in Yosemite National Park. For the duration of her arduous climb, Curry ate nothing but insect products (though she admits on her blog that she sometimes made dessert of a snort of bourbon).

Over the last nibbles of our chocolate cricket pudding, my tablemates and I agreed that discoveries like this are what make the Witte special. We may not eat bugs ever again, but our eyes have been opened to cultures beyond us. And that is the best dessert of all.