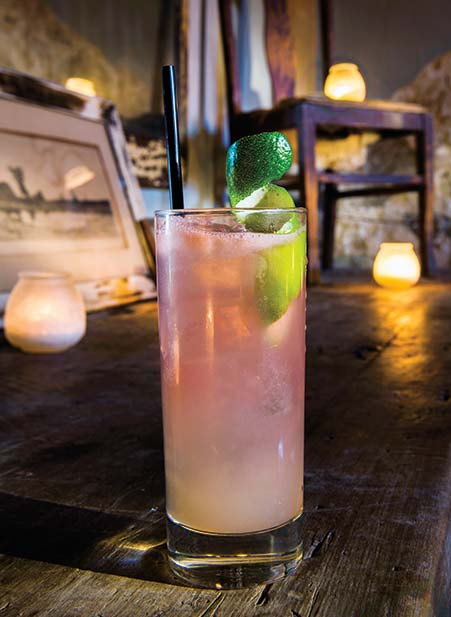 It’s one o’clock on a sunny Saturday in January, and I’ve come to San Antonio for the day to learn more about mezcal, that delicious agave spirit that’s the mysterious older cousin to tequila. It’s all part of the 4th annual San Antonio Cocktail Conference, a charity-driven, four-day party that presents more than 50 drink-related seminars to the trade and general public.

Along with 60 or so other mezcal enthusiasts, I’ve claimed my spot in the upstairs party room at Bohanan’s steakhouse for a tasting of six mezcal varieties and to hear the stories of their makers, or mezcaleros.

Before me are six champagne flutes with tiny samples of mezcal made from three family distilleries in Oaxaca and Michoacán. I taste smoke and fire, earth and grass, pepper, and citrus, but there’s something else I can’t put my finger on. Can one taste history and tradition?

Mezcal is the name given to all agave-based spirits. So while tequila is technically mezcal, not all mezcal is tequila, which must be made in specific regions of Mexico from the blue agave species. Mezcal, on the other hand, is made from many agave species, most commonly espadín, but also slow-growing tobalá and even lechuguilla.

Tequila’s gone mainstream, but most mezcaleros still harvest plants with machetes, roast the sugar-filled piñas (or hearts) in earthen pits, crush them with stone wheels powered by horses or mules, and then distill the liquid in simple clay or copper stills, as they’ve done for at least 400 years. It’s an artisanal process that predates the current fascination for all things artisanal. And now there’s a market for it.

“Families who were separated for many years by work are now together again in Mexico, making mezcal,” said mezcalero Emilio Vieyra, whose Siembra Metl brand will soon be available in the states. “I never could have dreamed I’d be with you today, sharing the spirit my family has made for generations.”

As moderator David Suro put it, “Mezcal is hot.”

On the forefront of the mezcal heat wave in Texas are Alba Huerta and Bobby Heugel, whose Houston bar the Pastry War (named for an 1838 skirmish between Mexico and France) serves Texas’ most varied collection of agave spirits, including a portfolio of rare mezcals. One afternoon a few summers ago, before the bar’s opening in 2013, Heugel described how some Mexican villages specialized in a mezcal style called pechuga, which is distilled through meats, vegetables, or herbs to infuse nuances of flavor. At the time, I couldn’t imagine how artisan mezcal could take off.

And then I started noticing mezcal on the menus of some of my favorite restaurants and bars. The Brooklynite in San Antonio mixes it with apple brandy and thyme. The Violet Crown Cinema bar in Austin gets creative with Campari and orange juice. Dallas’ Cedars Social reinvents the “flip” with mezcal, lime, and egg white. Even bars in mid-size cities like Abilene, where a drink at the Abi-Haus features both tequila and mezcal, have taken note. “At the Pastry War,” says Huerta, “we make a mezcal margarita to introduce newcomers to the spirit. It’s hard not to fall in love with something that has such a strong expression of the people who made it.”

My hometown of Austin, it turns out, has Texas’ only bar that serves exclusively mezcal—a tiny, rustic room called Mezcalería Tobalá (named for a wild species of agave). Open only on weekends, Tobalá occupies the second floor of the 1917 building that now houses a bar called Whisler’s. You can order cocktails such as the Mezcal Paloma (a grapefruit soda refresher that typically uses tequila) downstairs in a chandelier-lit space with exposed stone walls, but for a fuller exploration of the spirit, book a mezcal tasting at Tobalá.

Here, amid weathered mirrors and antique furniture imported from Mexico, you can try tiny sips in three-quarter-ounce clay cups called copitas, or wet your whistle with full pours in a traditional veladora glass etched with a tiny crucifix. As is the custom in Oaxaca, the mezcals are accompanied by orange slices dusted with sal de gusano, a spice made from salt, chile, and “agave worm” larvae.

“I had gone to Oaxaca to learn about mezcal, and I fell in love with the little tasting rooms there,” says former Tobalá bartender Cesar Aguilar, who developed the mezcal program with owner Scranton Twohey. “It is my humble but heartfelt opinion that mezcal is a mys-tical beverage. What amazes me is the resourcefulness of the plant. Agaves grow in areas that you can’t imagine could support plants, and some wild varieties grow 25 years before you can harvest them.”

Most mezcals are distilled from an agave species known as espadín, which can be harvested every 10 years or so. But some of the rarer mezcals come from wild agaves, and forward-thinking mezcaleros are already thinking about sustainability.

Explains Raza Zaidi, whose Austin-based company Wahaka imports organic mezcal from a family distillery in the Zapotec highlands of Oaxaca, “An agave flowers once, then dies. In order to use the plant for mezcal, you have to cut the flower stem before it grows, so that the sugars remain in the piña.” Unlike the espadín agave, which multiplies by creating “pups” at its base, most wild agaves need to flower to reproduce.

“We realized that if mezcal continues to grow in popularity, producers are going to damage the environment,” says Zaidi. In response, Wahaka formed a nonprofit called the Fundación Agaves Silvestres, which works to counter deforestation of Oaxaca’s wild agaves and to support more than a dozen small mezcaleros throughout the country. And so the cycle continues.

Steeped in tradition, hard work, and the land, mezcal communicates its rich story every time you take a sip.