Does your date want pizza while you want barbecue? No problem at Houston’s first underground dining hall. 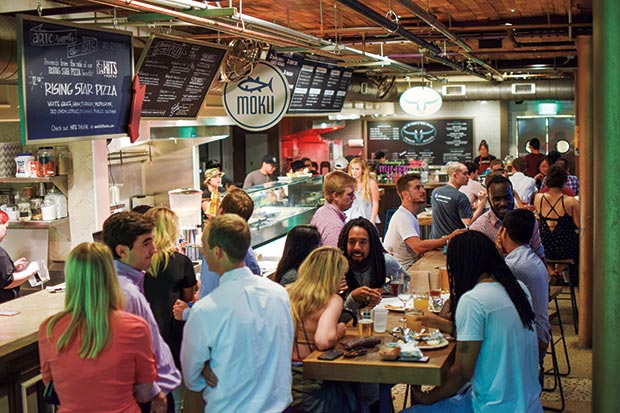 Whether you crave Vietnamese pho, Texas barbecue, fried chicken, or a Neapolitan pizza, Conservatory steps up to the plate.

Arriving during the dinner rush at Conservatory Underground Beer Garden & Food Hall, a bustling eatery in downtown Houston, I walked past a wall of colorful pop-art portraits at the entryway, then proceeded down the beautifully ornate stairwell. The scene that greeted me looked like a party in full swing.

Conservatory is a 6,500-square-foot beer garden and food hall housed in the basement of the 1913 Isis Theater, a silent movie house that closed in the late 1920s. The energy these days is electric; on the Thursday evening I stopped by, the space bustled with an attractive after-work crowd dressed in everything from power suits to jeans and T-shirts. In the center of the room, people sat shoulder-to-shoulder on barstools around several elongated community tables.

Everywhere I looked, there was laughing, munching, and animated conversation as patrons waited in line to order, mingled in loose groups, or gathered over drinks and plates ranging from fried chicken and barbecue to pizza and poke bowls.

Food halls are all the rage in the culinary world right now. Popularized by the success of the Italian-based Eataly chain, which became famous through its partnership with celebrity chef Mario Batali in 2010, halls big and small are popping up all over the country in cities from New York to San Francisco.

“All of the vendors are from Houston. None of them are corporate. They are all mom-and-pop, individually owned, small entrepreneurs—and for most of the vendors, it’s basically their first business.”

In Texas, food halls are just starting to gain momentum, with new ones slated to open within the next year in Plano, Austin, and Houston. Conser-vatory, which opened in spring of 2016, is the first of its kind in the greater Houston area.

Currently home to a handful of vendors within the resident beer hall, Conservatory has an artsy-edgy-cool industrial feel inspired by destinations like New York City’s Meatpacking District, all the while channeling a distinctly Houstonian identity.

The restored Art Deco handrail leading down the stairs was salvaged from the Isis Theater, for example. And the white neon sign hung above a row of booths reads “HOUSTON” in all caps, at once a proclamation as well as a piece of history. Salvaged from the side of the Houston Chronicle building, which was demolished this spring after 106 years in downtown Houston, the sign—like the beautiful handrail—is central to Conservatory’s theme of historical preservation.

“Everyone is local,” Conservatory owner Anh Mai asserts with pride. “All of the vendors are from Houston. None of them are corporate. They are all mom-and-pop, individually owned, small entrepreneurs—and for most of the vendors, it’s basically their first business.”

That’s true for Arte Pizzeria owner Kelsey Hawkins. Born and raised in nearby La Porte, Hawkins earned a degree in pastry and baking from Le Cordon Bleu in Austin before returning to the Houston area and finding a job at a high-profile Italian restaurant. When it closed, she found herself at a crossroads, selling homemade pastries at local farmers markets while she figured out the next step. 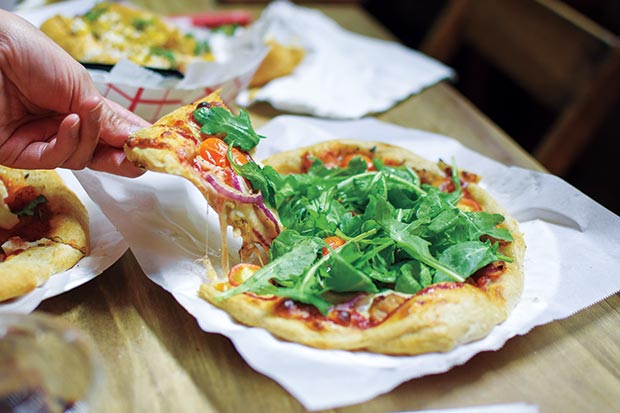 A former colleague who worked at Conservatory asked her to do a pizza pop-up here, and the rest is history. “I sold out in three hours,” she says. Mai, impressed, encouraged her to take over a space that was opening up. Within 28 days of the pop-up, Hawkins opened for business, offering personal pizzas using a dairy-free, vegan dough recipe. “It was about figuring out what I like in a pizza dough,” she says of developing her recipe, which uses a rye sponge starter in lieu of traditional wheat flour.

Arte Pizzeria’s popular Italiano ($10) comes topped with red sauce, mozzarella, Italian sausage, red onion, cherry tomatoes, and fresh arugula. I found the flavors and textures of the crisp, sweet red onion and peppery arugula a good foil for her house-made Italian sausage and tangy tomato sauce. But it’s the crust that sets this pizza apart: Chewy yet airy inside, with a satisfyingly crisp exterior, it makes each bite special.

El Burro & The Bull, a barbecue spot that also offers a menu of Mexican items like tamales and tacos, has a similar story. Born and raised in Houston’s East End, owner John Avila cut his teeth as one of the original pitmasters at Aaron Franklin’s famed Franklin Barbecue in Austin. He and his wife, Veronica, had been doing barbecue pop-ups out of a food truck while saving money for their own brick-and-mortar restaurant. Conservatory gave them the opportunity to open quickly and with little overhead.

It’s a win for Avila and for barbecue lovers. The brisket is melt-in-your-mouth tender, with a tasty, smoky bark; and the sausage is plump and juicy, with a delightfully snappy case. Pulled pork, smoked turkey, and pork ribs are also on the menu, and sides like ranchero beans and coleslaw are excellent as well. 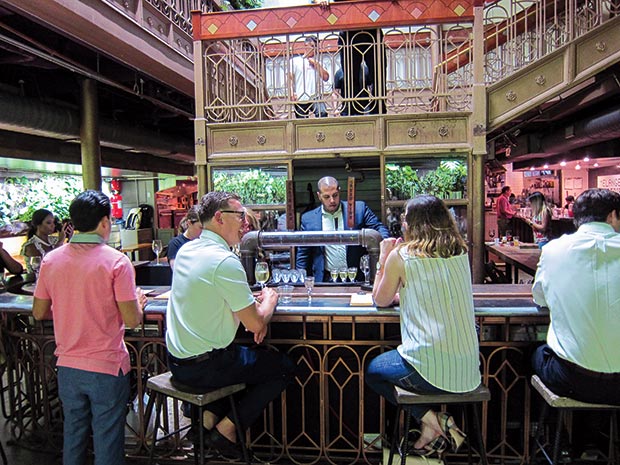 In addition to purveyors of barbecue and pizza, the current list of vendors includes a poke bowl concept called Moku Bar; Easy Does It, a sandwich and fried chicken spot where everything tastes better with a fried egg on top; Noble Rot Wine Bar, which offers an extensive by-the-glass wine list in the $5 to $7 range; a Venezuelan arepa stand called Gordi’s Arepas; and The Pho Spot, a Vietnamese noodle soup vendor where you can build your own bowl.

The Underground Beer Garden, which anchors the space, offers a rotating selection of 60 beers on tap (usually $6 a pint) from across the state, including local breweries like Eureka Heights and Holler Brewing.

With a renewable lease commitment for vendors of just one year, Mai says Conservatory—in large part due to low start-up costs and its preference for bringing in first-time concepts—has become a sort of restaurant incubator as well as a platform for the community. The artwork throughout the space features a curated roster of up-and-coming local artists. Chefs and budding restaurateurs hold frequent pop-up events, selling everything from gourmet hot dogs to noodle soups, ice cream, and cakes. “This is where local people from Houston can showcase their cuisine and their products,” he says.

Thanks to its success at Conservatory, Melange Creperie, one of the first vendors, recently made the leap to a brick-and-mortar shop in Houston’s Heights area.

Hawkins hopes she can make that happen for Arte Pizzeria, too. “I see myself doing something bigger in the future,” she says, citing sales figures that are twice what she expected. “This is a super-cool space. We get super-cool crowds, and this place gets crazy busy.”