On Deck in Corpus Christi

Written by Lois Rodriguez | From the June 2014 issue | Updated: July 10, 2020 | Filed Under: CoastDaytripperThings to Do 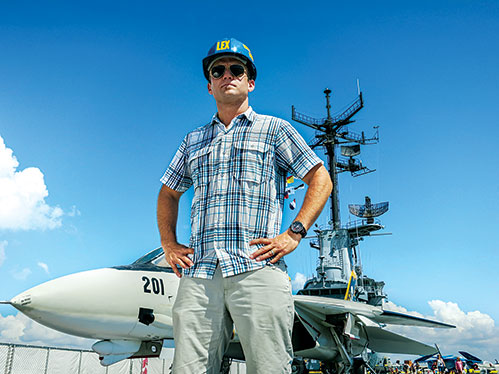 There’s no denying that Corpus Christi is one of the most beloved destinations in Texas, and for good reason. However, among the well-known  ways to pass a day on the bay, Corpus Christi is packed with plenty of hidden gems and off-the-beaten-path surprises.

I headed to this bay-front city in search of my own day-trip adventure.

8:30 a.m. I kicked things off at Nano’s Taco Run with a couple of steaming breakfast tacos—the most important taco of the day. The flour tortillas were fresh off the griddle, with the chorizo and eggs delivering the spicy protein punch I needed to jump-start my trip.

10:00 a.m. To learn about the origins of the city, I explored the Corpus Christi Museum of Science and History. Starting with the native Karankawas up to modern-day citizens, the museum traces the people and cultures that have shaped the Coastal Bend of Texas. I walked among displays spotlighting Spanish and French shipwrecks and stagecoaches, and eventually found myself staring at full-size replicas of two of Christopher Columbus’ ships, which also sailed from Spain … in 1992.

11:00 a.m. I crossed the Harbor Bridge to experience another era of nautical travel aboard the USS Lexington, a World War II aircraft carrier turned floating museum. The self-guided tour is packed with 100,000 square feet of incredible information and displays. After exploring the top, I decided to go deeper—literally—grabbing a flashlight and appropriate head protection for a guided Hard Hat Tour.
We descended into the belly of the beast, down narrow staircases and into dimly lit corners, including #1 Engine Room and the Evaporator Room, which could produce 180,000 gallons of fresh water a day.

1:00 p.m. I was hungry enough to eat a dozen MRE’s, but opted instead for the Executive Surf Club, a restaurant allowing everyone to get a small taste of the city’s surf culture. I grabbed a seat at a table made of old surfboards and ordered a shrimp wrap filled with fried shrimp, fresh vegetables, and homemade dressing. Cowabunga, it was good!

2:00 p.m. While traditional surfing is hit-or-miss in Texas, Corpus Christi is one of the best places in the world to kite surf. I arranged a private lesson from Prokitesurf and hit the water. The wind was consistent and strong, but sadly, my skills at capturing the wind were erratic and weak. I spent most of my lesson getting dragged through the water and tossed around like a rag doll. However, some small successes, and an awesome instructor, made me eager to come back and try again.

4:00 p.m. To enjoy the water in a much more relaxing fashion, I headed to McGee Beach, right next to the heart of downtown along Corpus Christi Bay. After a few hours of splashing around, I was ready to cash in my chips and spend the rest of my life wearing flip-flops and listening to old Jimmy Buffett records.

6:00 p.m. Margaritaville sounded pretty nice, but sno-ball-ville sounded even better, so I headed to Sno-Ball, Too, which keeps Corpus Christi iced-in. This local snowcone shop has more than 60 flavors, but upon a recommendation, I got a strawberry sno-ball with a scoop of vanilla ice cream on top. I can’t imagine a more perfect treat on a hot summer day.

7:00 p.m. I may have eaten dessert first, but I was still hungry for dinner. Luckily, it was game night for the Corpus Christi Hooks at Whataburger Field. I grabbed a last-minute ticket from the box office and a Whataburger with fries on the way to my seat. It was a fitting meal to end a day in Corpus Christi, as Whataburger started here in 1950.

The Star Spangled Banner played as the teams took the field, and I savored a day well-spent exploring this city by the bay. So whether you follow my footsteps or forge your own path, I hope to see you on the road.

Chet Garner is the host of The Daytripper travel show on PBS.