The History and Science Behind Bois d’Arc Lake

Located near Bonham, the newest lake in Texas is designed to provide water for cities and fish for anglers 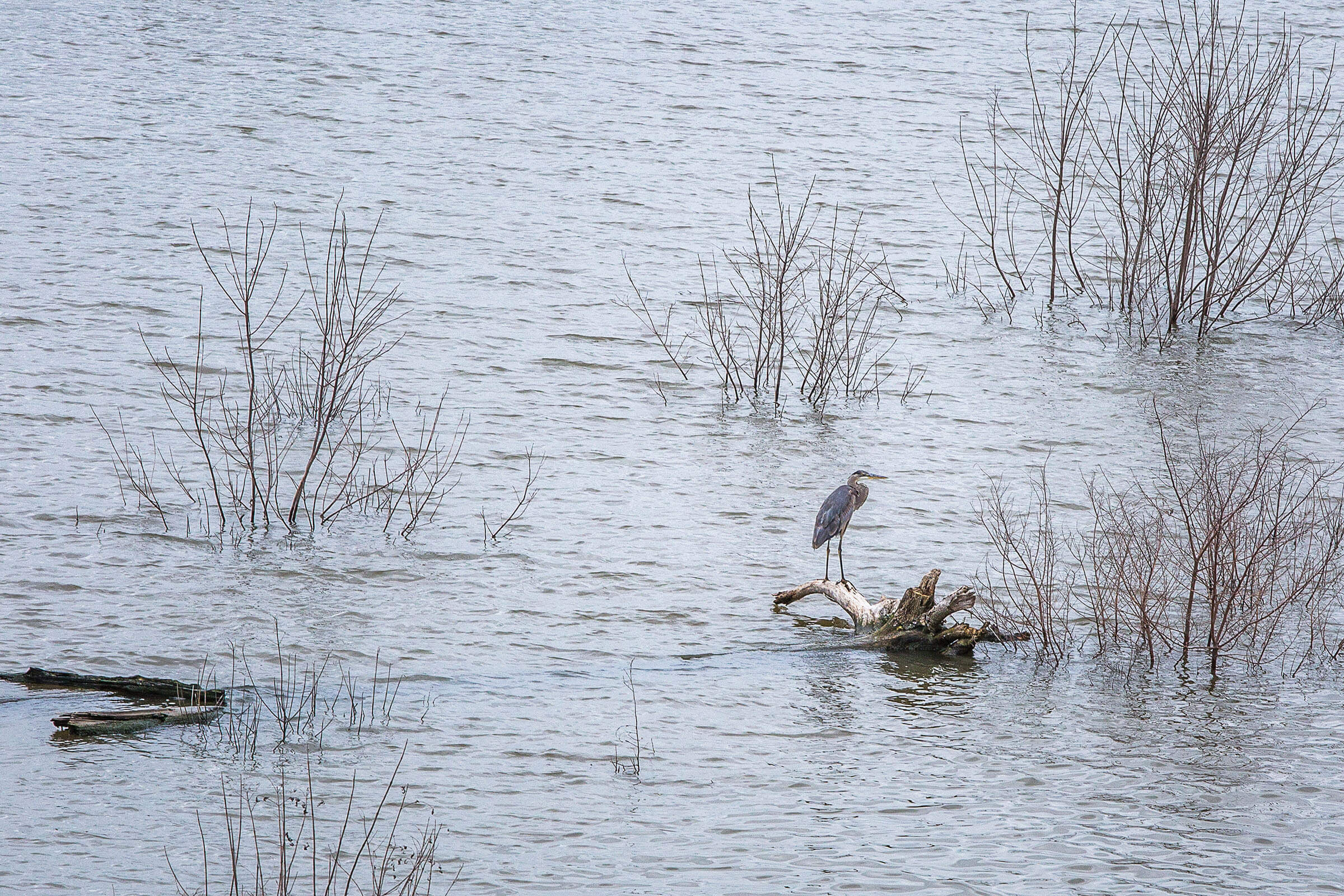 A great blue heron keeps an eye on the growing population of fish at the newly formed Bois d’Arc Lake in North Texas.

Like any birth, the creation of a new lake is both painful and miraculous.

Over the past year, I observed the final stages of the creation of Bois d’Arc Lake, a newborn reservoir near Bonham, about 65 miles northeast of Dallas. The North Texas Municipal Water District broke ground on the $1.6 billion project in 2018 to meet water demands in some of the fastest-growing cities in the nation, including Plano and McKinney. Formed by the construction of a dam on Bois d’Arc Creek, the new lake will eventually cover 26 square miles and could be ready to deliver water as soon as spring 2023, said Steve Long, program manager for Freese and Nichols, a Fort Worth-based engineering firm that worked on the project.

I first visited Bois d’Arc Lake in June 2021, about six weeks after water impoundment began. Trees still crowned above the water, and I could’ve waded across most of the lakebed. Bois d’Arc Creek streamed into the former farmland like a garden hose on half strength sloshing water into a kiddie pool. On my second visit, in February, the lake was about 30 feet deep in the middle and about a third full. By May, the lake level at the dam was at about 43 feet. The vagaries of rainfall mean it’s still uncertain when the lake will be ready for recreational use, but it could be as soon as this year. 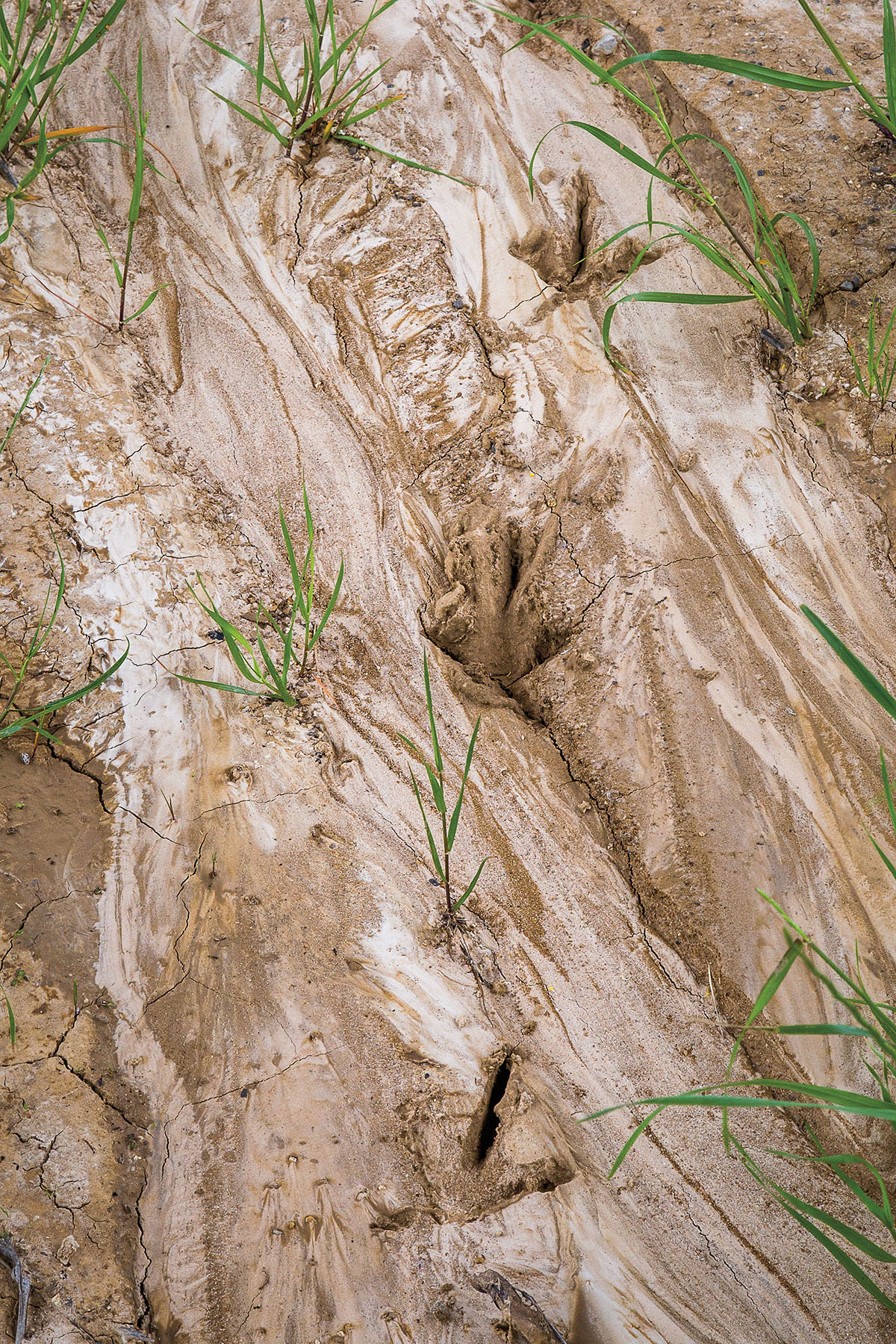 Bird tracks on the bank

While Mother Nature is running the show, the story of Bois d’Arc Lake’s construction reflects the complexities of humankind’s relationship with nature and history. Each time we dam a creek or river to make a new lake, we confront multiple challenges to balance the needs of a growing population with respecting all that came before.

Bois d’Arc Creek starts in Grayson County and flows 60 miles northeast before meeting the Red River. It’s named for a hardwood tree French explorers dubbed bois d’arc, or bow wood, in the early 1700s. They noticed Native Americans would travel great distances to trade with the local Caddo tribe for the wood.

For centuries, the Caddo lived in beehive-like houses of wooden poles and thatched straw in the Bois d’Arc basin, where they grew corn and hunted turkey and other game. Anglo settlers arrived in the region in the 1830s, attracted by fertile land. En route to the Alamo, Davy Crockett stopped near what he called “Bodark Bayou,” where he penned a letter to his family in Tennessee. He described Texas as the “garden spot of the world” and a potential homesite. It wasn’t long before the newcomers drove the Caddo out of the region. Republic of Texas leaders sacked several Caddo villages near the Trinity River between 1839 and 1841. Later, the Caddo retreated to a reservation along the Brazos River, and finally were forced north of the Red River to western Oklahoma in 1859. 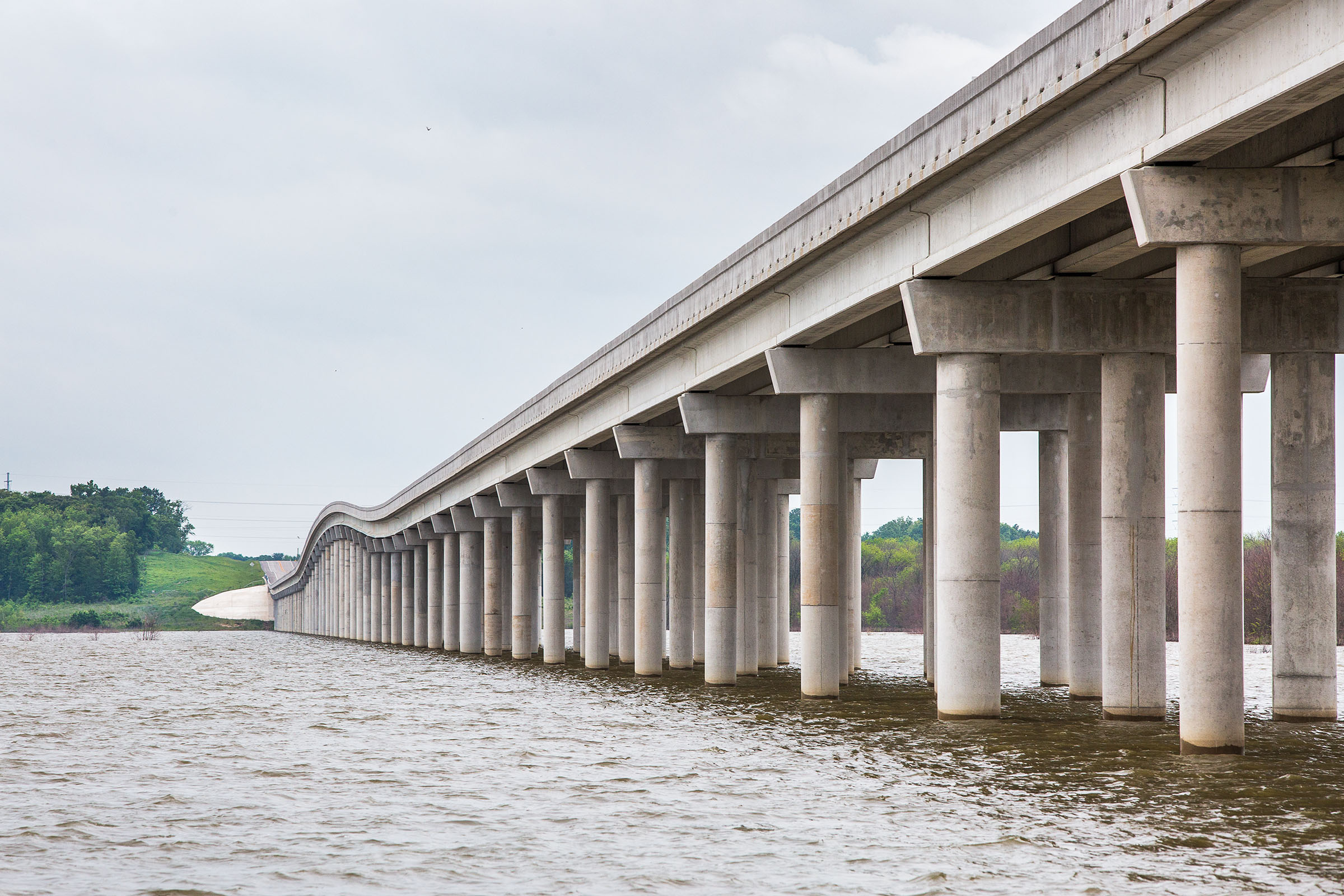 A new bridge on Farm-to-Market Road 897 spans the lake.

Through much of the late 19th and 20th centuries, the descendants of Anglo and Black settlers lived on the banks of the Bois d’Arc, maintaining small dairy farms and cattle ranches.

Rebecca Todd Shirley was born in Honey Grove in 1941 and grew up in the “Bois d’Arc Bottom,” as locals call it. Her father, S.L. Todd, taught at a school along the creek before starting a farm in the town of Telephone—the same land where Todd Shirley now lives, about 10 miles north of the new lake. By age 12, Todd Shirley was raising her own milking cow and helping harvest the peanut crop. On Saturdays, the family went into Bonham or Honey Grove for provisions and people-watching. Todd Shirley eventually left her own career in teaching to run cattle on the last 40 acres of the family farm.

Todd Shirley said she regrets that the lake will separate communities that have been connected by the creek since the days of Crockett. “For a person who has worked the ground, lived close to the soil, it’s hard to see all that land go underwater,” she said. But she’s also hopeful the lake will revitalize the area.

Bois d’Arc Lake is one of about 200 significant man-made lakes in Texas. Many of them were built shortly after World War II, followed by another surge of dam construction in the 1960s and ’70s to meet population growth. As an Irish transplant in Texas, I’ve always been impressed with the number of lakes across the state, and I’ve wondered how such massive reservoirs were made.

Though technologies have advanced, the general process remains the same. First, engineers reviewed the hydrology and rainfall patterns of Bois d’Arc Creek and its Honey Grove Creek tributary to identify the best place for the dam. To offset the environmental impact of flooding the land, the North Texas Municipal Water District purchased more than 15,000 acres on the Red River and upstream on the creek to restore them to bottomland hardwood forest.

While Bois d’Arc Lake’s primary purpose is to provide drinking water for nearby cities, fishing could be the lake’s biggest draw. During construction, engineers repurposed several existing stock tanks in the lake’s footprint as brood ponds and seeded them with baby bass and catfish. As the water rose, the fish populated the lake, enhanced with other fish releases. The engineers also anchored piles of brush and timber on the lake’s floor to make artificial reefs for fish to congregate at feeding and breeding times.

Bois d’Arc Lake will have three boat ramp areas, free to access and overseen by the North Texas Municipal Water District. There are no lakeside public parks planned for now.

With new opportunities for lakefront development, Bonham officials hope Bois d’Arc Lake, along with projects like the recent restoration of the 1888 Fannin County Courthouse, will boost the local economy. “The lake is already bringing in a lot of people who are curious about it,” said Melissa Maxwell, Bonham’s director of tourism and marketing. To learn more about the lake, visit boisdarclake.org. 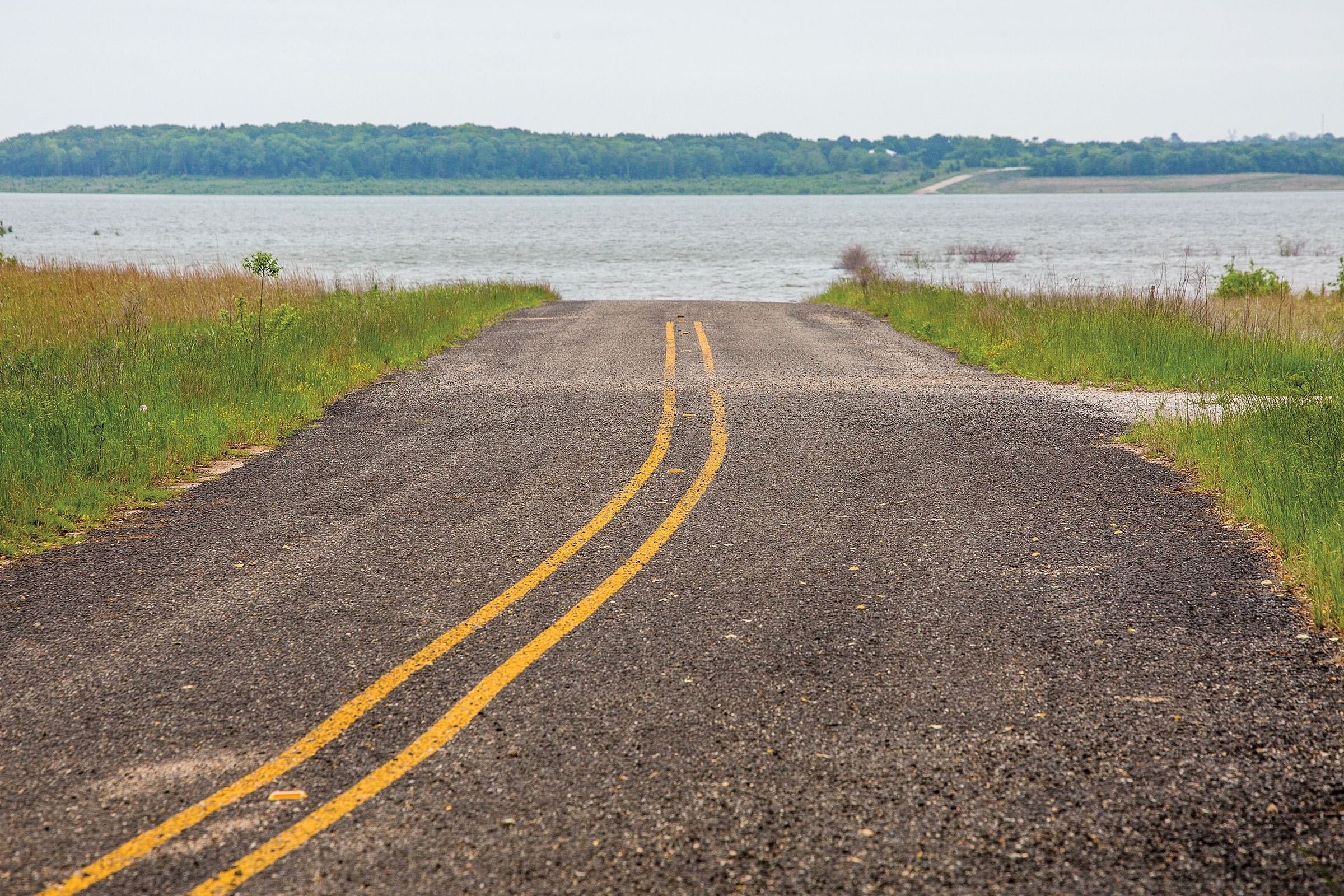 The district also conducted an archeological survey of the lake area. District officials said the assessment uncovered six sites worthy of the National Register of Historic Places and resulted in the recovery of more than 750,000 artifacts, including fire-cracked rocks, pottery, tools, arrowheads, and human remains. The remains will be reburied elsewhere—on land donated to the Caddo tribe for this purpose—while other artifacts will be curated with the state.

“These sites would never have been explored at this level of detail without the lake,” said Malinda Allison, a member of the Fannin County Historical Commission. “Regardless of what you think about them being submerged, many of them would never even have been known.”

After clearing the forested land, builders constructed an earthen embankment about 2 miles across, made up of millions of cubic yards of local clay. Sticking out in the middle, a concrete intake tower funnels water to the raw-water pump station. On one end of the dam, a concrete spillway allows for water to be discharged back to Bois d’Arc Creek.

While Bois d’Arc Creek’s lower reach may look similar to the way it always has, there’s no doubt this historic waterway has been forever altered by the birth of its namesake lake—a story repeated dozens of times across the state.

Bonham can look to nearby examples like Lewisville Lake to see how it changed the face of the community when it was completed during a series of projects from the 1920s to the ’50s. Where there was once a small farming community, the lake is now a bustling DFW riviera.

Todd Shirley said there could be upsides for the Bois d’Arc Bottom, despite the loss of agricultural heritage. “It’s going to bring a lot of people in to buy property and have homes there,” she said. “It may give us a shot in the arm.”