A Century of Shiner

In 1909, the Spoetzl Brewery began crafting the beer that turned this Central Texas town into a household name 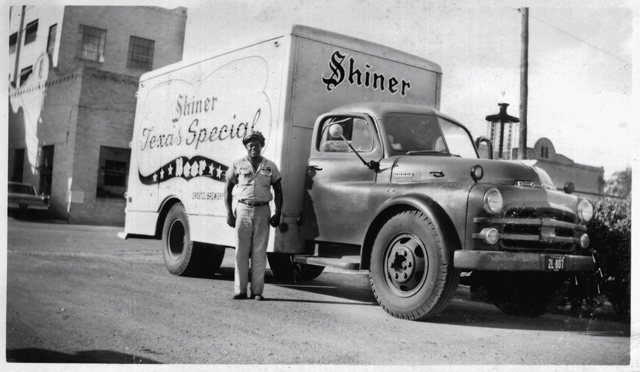 Lontime Spoetzl Brewery employee Calvin Cosmo Wallace stands proudly before one of the trucks he drove for the brewery. (Photo exerpted from the book Shine On: 100 Years of Shiner Beer by Mike Renfron)

It was with some trepidation that I made my first visit to the Central Texas town of Shiner.  All I’d read and heard from people who’d been there made the town seem way too good to be true.  I figured I’d get there and find the quaintness to be prefabricated and then I’d end up disappointed.

I was wrong. And I’ll explain why.

A friend from Austin who’d helped plan the surprise-party introduction of Shiner Light to the townspeople of Shiner told me a story that captured Shiner’s personality. He rolled into town one morning and stopped at Howard’s convenience store.  There he noticed a flier for a local musician that he would consider as a performer for the surprise party. My friend left his contact number and drove on.

A few minutes later, at a barbecue place at the other end of town, my friend inquired about catering services. The barbecue-joint owner looked up and said, “Oh, you must be the guy having the big party I heard about.”  A total of 10 minutes had elapsed since my friend had hit Shiner city limits and his “secret” mission was already the subject of chatter from one end of town to the other.

Everybody knows everybody in Shiner. This can be a good thing or a bad thing, but it is, for the most part, a good thing. If keeping secrets is high on your list of priorities, I suggest somewhere else. However, if a glimpse into what small towns used to be like is of interest to you, Shiner’s your place.

First, Shiner is what it was. For the most part anyway. A look at the town paper gives you one insight as to why this is so. Many of the Germans and Czechs who came here years ago never moved on to the bigger cities. Walk into any of the stores or restaurants and you’re likely to encounter another oddity. Once you start up a conversation, you’re likely to hear just a lilting hint of the old country in their accents. Some can even go from a slight Texas  twang into faintly remembered German or Czech that a grandfather or aunt spoke around the house.

Certainly, time has not stood still here. Family and valued heritage account for a lot, but there are more practical considerations as well. Most notably, there is work to be had in Shiner, a blessing many small Texas towns have lost over the years.

You might be surprised to know that the brewery is not the largest local employer. That title falls to the Kaspar Wire Works, across the road, where they make, as you might expect, things out of wire.

They actually got their start making odds and ends out of the discarded wire from old fences. The turning of the old and discarded into the new and usable was not a “cause” back when the Kaspar family started their enterprise; it was simply a way to make a living. Yet like their neighbors at Spoetzl, who would later become popular for using only natural ingredients, the Kaspars were cool way before anybody else had
come up with the phrase “recycling.”

In a purely economic sense, the wire works certainly has had the most impact on the town over the years.

And then there’s the brewery. Certainly, unless you’re a wire enthusiast or consumer of large numbers of gymnasium lockers, it’s the place that put the town on the map. Most days in the summertime, 100 or more people show up there to take the tour and enjoy some complimentary beer in the Hospitality Room. You can easily spend a couple of hours there, so if you’re headed that direction, allow yourself a little time.

Ask the tour guide about the rumors that during Prohibition there was an underground tunnel running under the road over to the wire works where a secret cellar allowed the Kaspars, at the end of a hard day, to get themselves a cold beer. Ask about “The Shiner Song,” the lyrics of which are in Czech and the
melody is still played at the high school football games. The mascot is “the Comanches.” You might ask about how that came to be, too, while you’re at it. I suppose that’s because “Comanches” sound a whole lot fiercer than say, the “Fighting Brewmasters.” No doubt, there are also rules about the usage of mascot
names related to alcohol. Still, it’s fun to think about what might have been.

Which leads me to another little side street in Shiner. As wine is to Italians, so beer is to some Shinerites. By this, I mean it is not at all unusual for it to be a part of the noon meal and certainly supper. As a direct result of that, it is not uncommon to hear the folks in town tell you that they tasted their first Shiner very early in life.

It’s easy to enjoy Shiner’s small-town charm when you roll past the “Cleanest Little Town In Texas” sign. If  that sign doesn’t convince you, maybe a stop at one of the local domino halls or a visit with the retired gentlemen who meet daily to call to order the latest session of the Shiner Beer Drinking Club will help you more effectively get into the vibe of this delightfully odd setting. Ask ’em to point out the brick in the town square they had inscribed and dedicated to “the unknown beer drinker.” If you’re lucky and hit town on a weekend, you might even get to hear the oompah music of the local Shiner Hobo Band down at the park.

Unlike the beer named after it, Shiner, the town, is anything but cold.