A Sightseeing Journey of the Billboards of Houston, 55 Years after LBJ’s Beautification Act

55 years since the landmark act, one intrepid writer sees billboards as signs of the times 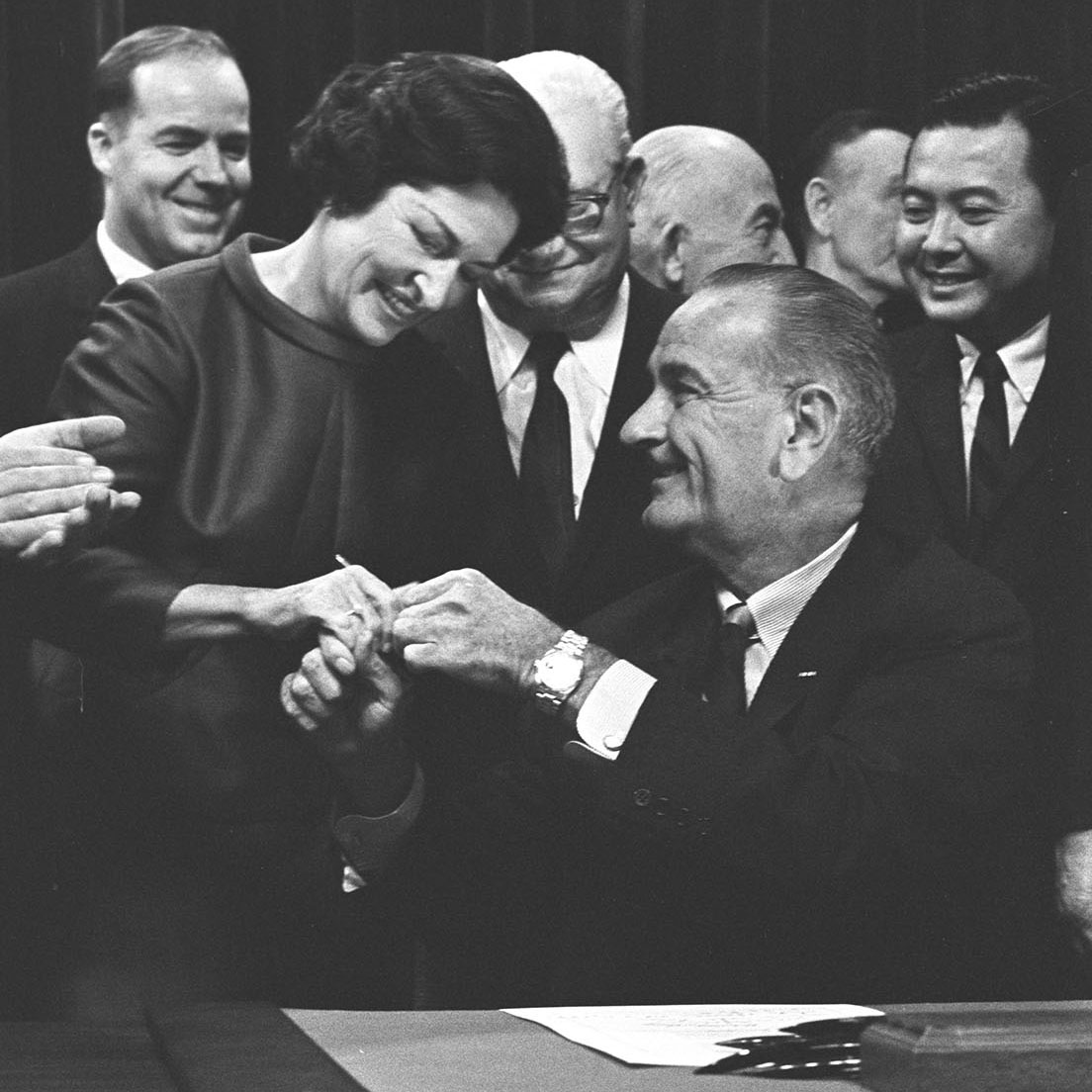 President Lyndon B. Johnson hands a signing pen to Lady Bird Johnson as others look on. Photo by Frank Wolfe/Courtesy LBJ Library.

With Texas both among America’s most car-oriented states and famous for its somewhat laissez-faire approach to the trappings of capitalism, it may come as a surprise that history’s most effective nationwide push against freeway billboards originated at the hands of two Texans: President Lyndon Baines Johnson, acting primarily at the behest of first lady Lady Bird Johnson.

Not that LBJ didn’t personally have it in for the “litter on a stick” industry, as detractors term this form of advertising. “This damn billboard lobby has run this country,” Johnson said in a telephone call in 1968. “I never seen such a … group of selfish, eager hogs. They won’t even let people sit down and try to reason with ’em.” Mind you, this was three years after his and Lady Bird’s Highway Beautification Act curtailed the hitherto-near-unlimited powers of the “sky trash” industry to erect whatever it wanted wherever it saw fit.

This month marks 55 years since the signing of the act. So what are the results of the Johnsons’ efforts in the president’s one-time hometown of Houston, the infamously zoning-averse city with arguably the most freewheeling business climate in the state? What do the billboards that remain have to say about Houston?

To fully ponder the impact and meaning of billboards in my hometown, what better way than to drive its length east to west? And not just some agreed-upon notion of its dimensions, because when considering what is and is not Houston, one must ignore maps, as the Bayou City outgrows any attempt to fix it in time in a measly two dimensions.

Houston is as Houston does, and right now, on an east-west axis, Houston keeps Houston-ing on—all the way from the Lost and Old tributaries of the Trinity River clear out to the Brazos, from where Greater Louisiana, with its swamps, alligators, piney woods, and boudin, gives way to the “Real Texas” of cattle pastures, brisket and chicken fried steak, and the primacy of oak and mesquite. As you approach from the east, this Real Texas begins at the former rest area in the median of Interstate 10 near the Peach Ridge Road exit out by Brookshire.

Along almost this entire stretch of I-10, you will find Houston-ness—walled in as it is with garish strip malls adorned with bold signage along what Houstonians almost alone call “feeder roads.” Setting out, I first pointed my aging Accord east toward Beaumont, turned around on a dirt road dead end at the Lost and Old River, and headed west for Big Brazos.

One of the first things I noticed was that billboards were relatively few compared to the days of my youth. Back in the 1970s and ’80s, local advertisers enjoyed more success in staving off the dictates of Johnson’s act on the ground. Since then, local pressure groups such as Scenic Houston have made progress—at their peak, the vast city was forested with somewhere between 10,000 and 15,000 billboards. As of last year, that number was around 1,500. Long stretches were billboard-free, leaving me to prattle on to myself on vaguely related tangents as I “took notes” behind the wheel.

What did these remaining billboards have to say? And why do advertisers love them so?

Last question first: because they work. Advertisers love billboards because they believe, as one put it, these giant placards catch motorists “in the hazy chasm of endless interstates,” where our minds, uncluttered (hopefully) with our cellphones and “the endless noise of everyday life,” are blank canvases for their messages. This seems to bear more than a little truth, especially in a car-besotted city like Houston. Driving is the one activity the vast majority of Houstonians share in, and so there are few more-efficient ways to get your message across than highway signs.

As for the second question, what emerged after four or five hours of driving was a dichotomy dividing (broadly speaking) blue-collar industrial east Houston and white-collar residential west. Heading to and returning from the east, I saw several billboards apiece for a chain of vape shops and standalone emergency rooms—one of which, Patients Emergency Room of Baytown—aggressively marketed itself through a series of billboards that directed would-be patients to keep driving past several exits until told to “Exit Now” for their healthcare services. “Hospitals often utilize local billboards to create awareness about their location,” I had read in my prep for this trip. Patients Emergency Room definitely took that lesson to heart.

Nicotine was not the only highly touted stimulant. Another billboard trumpeted the praises of BuzzBombz, little fistfuls of grenade-shaped carry-out cocktail oomph. And so plentiful were ads for legendary personal injury attorney Jim Adler, I began to think of this stretch of I-10, known locally by the most unpoetical “East Freeway” designation as “the Texas Hammer Highway.”

Contrast that with my drive into the golden sunset and relatively prosperous, primarily residential west Houston. Here a different hierarchy of needs emerged. Apparently, these people already had Hammers in their toolkits, as Mr. Adler, Esq., did not bellow his services here as often. Yes, the healthcare industry was prominent, but instead of emergencies at standalone facilities, you were gently reminded to seek preventative measures like mammograms at institutions such as the Methodist Hospital group.

Way out west, I started to see billboards for this and that new master-planned community, each offering that oldest of Houstonian fantasies—country living near the teeming metropolis. It’s a dream with a short sell-by date: A century ago, such pitches were employed to seduce urbanites to load up their Model Ts and head out to the pastoral charms of the Heights and Montrose, and then it was Packards to River Oaks, and then Chevys and Fords to Bellaire and West University, and then Suburbans to the Memorial Villages, and then Japanese imports to Alief, and then Tahoes to Sugar Land and Katy, and then big ol’ trucks to Cypress and now… You have to chase that phantom all the way to the hamlet of Fulshear, 40 miles west of the city center

Jordan Ranch, one such Fulshear master-planned community, touts its own praises with that age-old Burma Shave tactic of sequential signs saying things like “Out Here,” “Friendship Grows,” “Home Is Sweet,” and “Play Is Every Day.” That may be true right now, but that is what they were saying about Montrose in 1920, too. But at some point, way out here, halfway or more to Sealy, Houston has to stop sprawling, right? Right?

There’s an old adage in the billboard business: seven is the magic number for words on a billboard. (Example: “Live Like People, Not Like Bees,” as a locally famous single-family home developer’s billboard put it long ago.) That’s all you get to put your point across, and those words should be big. It seems like that lesson is lost on modern billboard designers.

One striking billboard I saw two or three times featured two actor-looking men in dramatic greenish lighting. Bearing the words “Tonight I’ll be eating better than him,” this sign left me flummoxed. I spent more time trying to puzzle out whether or not one of the men pictured was Patrick Stewart (it was) and what the quality of his evening meal relative to that of his frenemy (who turned out to be Mark Hamill) had to do with anything than I did looking at the rest of the billboard. In tiny print tucked away in a corner, I was informed it was for Uber Eats. Too cute by half, I think. They’d be better served with something like a bright yellow billboard with black lettering reading simply “Try Uber Eats Tonight.” (This poorly designed billboard was not alone. Another featured a baby gorilla cradled by a parent and said something like, “Your visits keep us safe.” Tiny lettering in the corner again, this one courtesy of the Houston Zoo.)

Others hewed to the big-and-short approach: Geico with the gecko and a message of simply the words “Home” and “Life.” OK then. Port Arthur’s Museum of the Gulf Coast succinctly encapsulated its astounding scope with admirable economy: “From the Jurassic to Janis.” Circle K urged us to “Fall Into Fresh Coffee” on an orange billboard bearing a smoldering cup of joe and an array of tempting sweet pastries.

And then, of course, there was Buc-ee’s; Buc-ee’s everywhere, going east and west. In a way, theirs was the old Burma Shave approach writ Texas Big—instead of 100 yards between signs, they spaced them in the dozens of miles. The current crop included signs for the “Pulled Pork Perfection” of their barbecue sandwiches (targeting the non-Texans along these to-them foreign highways?) and a characteristically risqué example urging us to grab their beaver “By the Nuggets.”

At the end of my day in the hazy chasm of endless Houston, I succumbed to the beaver’s entreaties and treated myself to not one but two of their barbecue sandwiches. Beef, not pork; as I am a Texan and not a Dixie heathen.