In just three years, Trent Anderson went from removing bees to having a beehive operation with hives in Texas and California 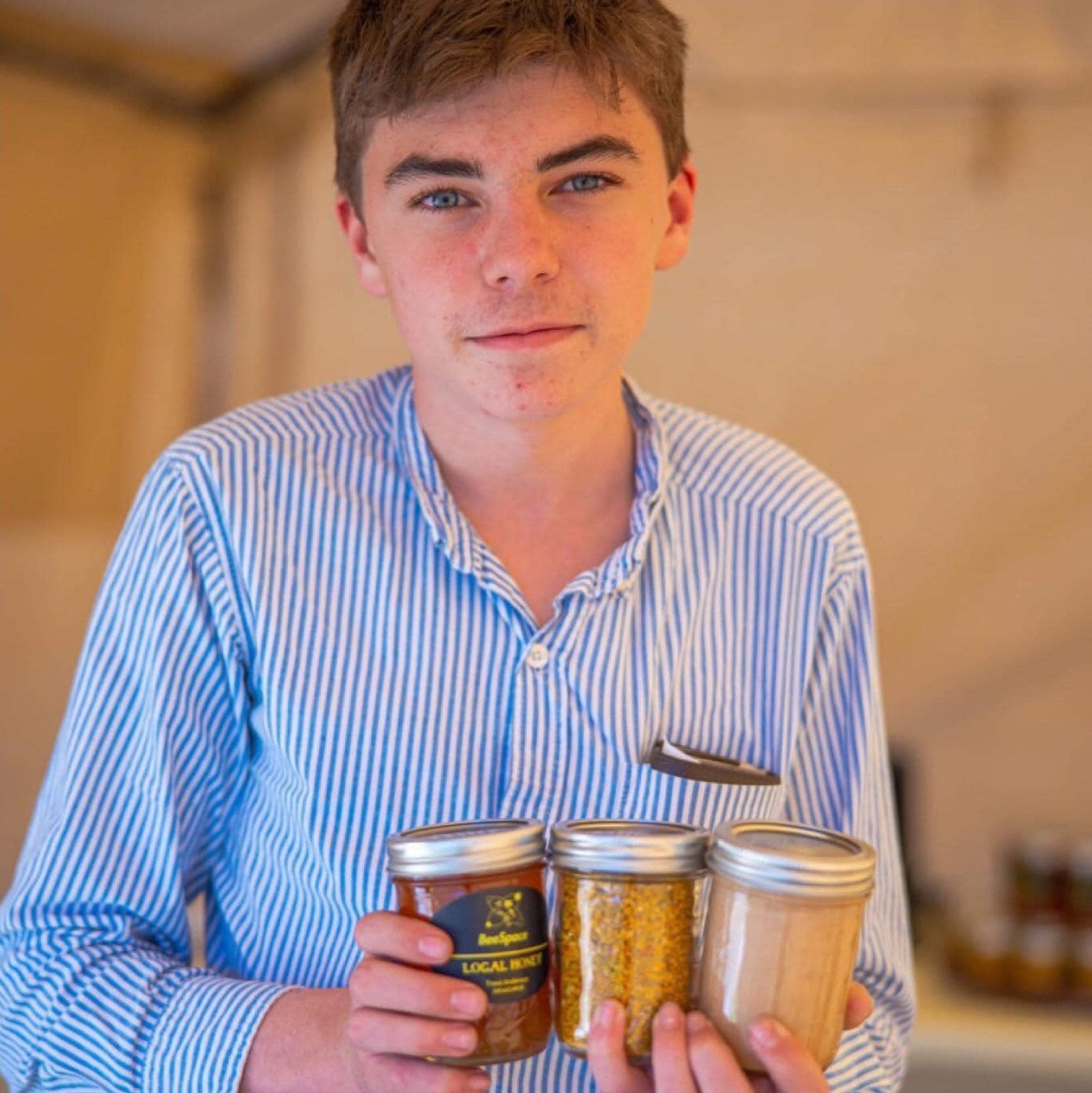 When Trent Anderson was 14, he stumbled upon some old beehive boxes in his grandfather’s trailer in Lytle, just southwest of San Antonio, and decided to fix them up for a friend. He cut off the rotted parts, added new tops, and painted them—pretty simple carpentry work, he says. Then he had a change of heart.

“When I was done, they looked too good to give away,” he says.

That began his love of beekeeping.

Anderson learned everything he could about maintaining bees from his grandfather and other beekeepers. He launched a modest bee removal service and went door-to-door leaving business cards to advertise his offerings. People called him when they needed the insects removed from their walls and sockets. He used those bees to build up his hives, and last year he started selling honey from the hives along the side of the highway outside Castroville, a town of about 3,000 just west of San Antonio where his grandparents live.

Now 16, Anderson has gone from refurbishing those boxes to operating a thriving business. He has 170 hives split between Texas and California and his storefront BeeSpace, where he sells honey and other locally made merchandise.

Earlier this year, Anderson moved his store to town, opening at a location on US 90 and running the shop out of two carport tents set up next to each other. Business was going well until Anderson suffered a major setback: a severe storm blew through Castroville in late April and destroyed the storefront. Promising to rebuild, Anderson launched a Venmo account (@Trent-Anderson-82) to accept donations. Within a few weeks, his business was able to reopen, this time in a sturdier building.

“It was quite disappointing to see the honey shop wiped out but at the same time very inspirational that the entire community had my back and was able to support me. Donations alone were able to cover around 50 percent of the cost of rebuilding,” he says.

In addition to selling honey, the store offers merchandise from small-business owners like Emma Parijs, who launched freeze-dried food company Pinwheel Foods (formerly Crunchy Munchies) from Lackland Air Force Base, and “stay at home mom” Alexis Hunt, owner of Knead Grace Bakery, also based in San Antonio. Anderson’s girlfriend, Claire Harrell, who is a beekeeper he met on a networking trip to California, also sells her homemade soaps.

“I like to source everything locally so we wanted to kind of have a homestead aspect to the store,” Anderson says. “I have brought on a local jam producer that produces all of our jams and we will be selling homemade honey infused soaps and shampoo soon.”

When he was starting his business, Anderson received a lot of help from his family, who drove him around before he had his license and provided construction equipment for him to use. He learned a lot about the business from his grandfather, who tended bees in the 1980s. He also taught him the value of relationships and family.

“He is probably one of the people I admire the most,” Anderson says.

Being a hard worker and willing to put in the time and research is nothing new for Anderson, says his aunt Lynn Anderson. “Trent has always had a thirst for knowledge, but what separates him from a lot of people is he has sought out mentors who can teach him or are at a place where he wants to be,” she says. “He has never met a stranger and has no problem talking to anybody. That’s how his success in bees has exploded so fast.”

Beekeeping is a science, one that requires a watchful eye over a hive. Anderson says when the hives get too big, he splits them to create new ones. He pulls the eggs, larvae, and pupae from the nest and puts them in a separate box with queen bees that he’s mated. He then takes them miles away so they can’t fly back to the original box. He supplements the new box with pollen until the queen starts laying eggs, and it becomes a full hive.

“You get stung pretty regularly,” he says. “There have been a couple times I got intimidated by a beehive, but usually they are pretty docile.”

In order to pursue his venture, Anderson switched from public to online school last year. He currently splits his time between Texas, where he lives with his grandparents in Castroville, and California, where the majority of his hives are being used to pollinate almonds, which rely on bees to make a crop. He and Harrell plan to more than double their hives by the end of the year.

“We want to feel like we are doing something important that doesn’t limit us like an hourly job and that lets us grow together,” he says. “We want to be able to support our own family, and we think that this will have a good environmental impact.”

According to the U.S. Department of Agriculture, three-fourths of the world’s flowering plants and about 35 percent of the world’s food crops rely on bees and other animal pollinators. Anderson says this includes foods like watermelon and blueberries, which depend exclusively on bees.

“If we didn’t have the benefit of pollination for wild plants, the ecosystem would pretty much break down,” he says. “We’d also have a lot less variety of food on our plates, which would be pretty boring and pretty sad.”

Anderson says many native bees are being wiped out by the use of pesticides, which is why he thinks it’s important to incentivize farmers to find more sustainable ways of farming that don’t require chemicals. Saving the bee population will require societal change, he says.

“Bees are being forgotten and left behind. And they’re pretty vital.”