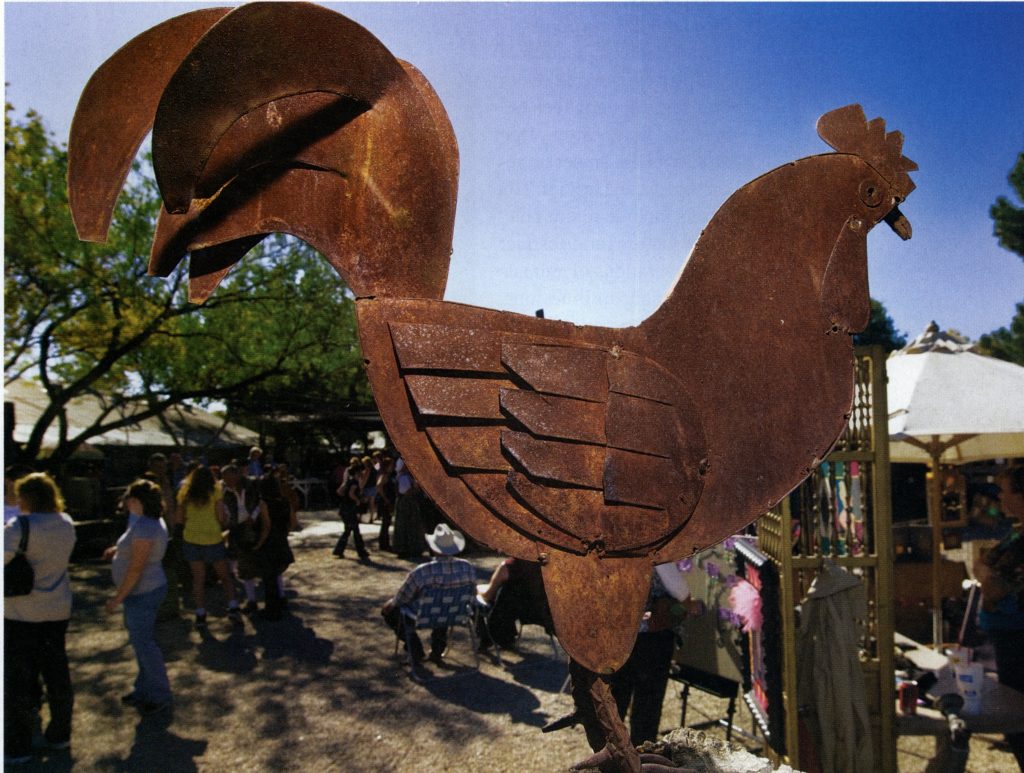 Artists sometimes refer to the time they spend at the art center as “Chicken-Farm time,” an affectionate nod to the special ambiance they feel pervades the complex.

It’s a good bet that the former residents of the three-acre  site at Martin Luther King Drive and West 25th Street in San Angelo wouldn’t recognize their old scratching grounds. After all, this onetime chicken farm now features artists’ studios, a gallery, a sculpture garden, a cozy B&B, and an outstanding restaurant run by two chefs who trained at the Culinary Institute of America in New York.

”When I bought this property with two friends in 1971, the plan was to provide a spot where artists could live and work,” says Roger Allen, master potter and director of the Chicken Farm Art Center. “There wasn’t much here, except for a few chicken coops and some rundown, old buildings. It was pretty desolate. With the help of a lot of people, we turned the chicken coops into studios, and, little by little, fixed up the other buildings. Forty years of hard labor has transformed this place,” he says with a wry grin.

My friend Cheryl Stephenson has joined me from Lubbock on this trip. We’re staying at the Inn at the Art Center, the on-site B&B, which is modest, but furnished with comfortable beds and original art. I’m up early to talk to some of the 15 artists with studios here, who refer to themselves as “Chicken Farmers.”

Walking the short distance between the B&B and the artists’ studios one Saturday morning, I find it difficult to imagine that this rambling retreat ever looked desolate. It reminds me of Santa Fe, or perhaps how Santa Fe might have looked before it was crowded with tourists. Flowering plants abound, and a songbird warbles overhead in one of the big red oaks scattered throughout the grounds.

An eclectic collection of sculptures ranging from two feet to eight feet tall beckons me to Stone Dog Studio, where I meet stonecarver Oscar Latham. His works include totem pole-like structures and abstract representations of animals and humans in limestone, marble, alabaster, and onyx. How does he decide what to carve? “I just follow the stone,” he says, “and the shapes come out.”

At Joe Morgan’s studio next door, I learn a little about horsehair pottery, Morgan’s specialty. The alabaster- looking pots owe their distinctive, fine-lined appearance to real horsehair that’s introduced immediately after the pots are taken out of the kiln, he tells me. Holding a pot with tongs, he carefully places horsehair on the hot surface; the horsehair curls and burns in unpredictable ways, leaving random patterns. A high school art teacher, Morgan also creates face mugs, each one with a different personality, and whimsical fish. “I’m not a production potter;’ says Morgan. “I like to make pieces one at a time.”

Talking to people who are passionate about their work always energizes me, and soon, I’m hungry as well. When I return to the room, I find that B&B
co-owner Susan Warnell has stopped by to tell us that brunch awaits in the breakfast nook next door.

Cheryl and I decide to eat in, so I walk over and pick up our food-blueberry scones and Devonshire cream, prepared by the inn’s chef, Jerry Warnell. Jerry, a glass artist, and Susan, an iconographer, used to operate the Silo House restaurant, where we’ll dine tonight. For now, we discover the delights of dunking the corners of the fruit-laden, almost cake-like scones into small bowls of sweet cream.

Cheryl joins me now in strolling the grounds. We stop at Studio BB3 and talk with glass and fiber artist Janet Moran. One of Moran’s specialties is making glass beads. ”Would you like a demonstration?” she asks. Absolutely, we say.

Moran fires up her lampwork torch and begins “laying a footprint” for the bead by winding molten glass around a steel rod called a mandrel. She deftly adds the finishing touches, and then places the mandrel-with the bead still attachedin a small kiln. The bead will release after it’s annealed (tempered). Fascinated by the process, Cheryl buys several pink, magenta, and green beads that resemble stylized rosebuds, which Moran threads onto a thin wire with a simple clasp. One necklace, ready to go.

We then visit with batik artist Gary Norman, who creates large abstracts through a complex process of applying hot wax and fiber-reactive dyes onto fabric. He uses custom-made tools from Indonesia to produce distinctive textures and patterns. “I use a combination of watercolor techniques to apply the dyes;’ he says, “sometimes painting them on drop by drop:’

Crossing to the other side of the compound, we stop in at Tony Dosiek’s metal studio. After working with metal in the commercial roofing industry for decades, Dosiek says he began fabricating interior design elements from light fixtures to fountains. “I went from making right angles to creating domes and curves;’ he adds.

“There’s a wonderful collaborative energy at the Chicken Farm;’ says Dosiek. ”You can feel it as soon as you walk in the gate:’

Howard Taylor, the director of the San Angelo Museum of Fine Arts, agrees. “There are other artist-run facilities across the country,” he says, “but the Chicken Farm stands out not only because of its size and the richness of its offerings, but also because of its community outreach. There’s a genuine giving spirit there:’

When we catch up with Allen at the StarKeeper Gallery, where he exhibits his own work—colorful, jewel-toned dinnerware and other ceramics with Native American themes—he sums up the center’s philosophy. “Our motto is ‘Sharing the Art Spirit’ and that’s always been the main objective of the Chicken Farm,” he says. “Now, we share it not just among ourselves, but with the community, through events like our three-day Thanksgiving Open House, which takes place the weekend after Thanksgiving. It’s our biggest gathering and always includes lots of artists, good food, and live music.”

The Chicken Farm also hosts monthly First Saturdays—family-oriented events that attract hundreds of art lovers. All of the Chicken Farmers open their studios for visitors, and 20 to 25 invited artists also come and display their work. Many of the artists offer demonstrations. Children can take part in painting and clay activities, and the Silo House serves wood-fired pizzas in the courtyard.

Over the years, First Saturdays have evolved to include blacksmith demonstrations and live music by the Chicken Pickers and other acoustic music groups. The blacksmiths now have an annual event at the Chicken Farm the first weekend in May—Blacksmiths and Blues—which includes a metal workshop and a blues music contest.

The main event for us this evening is dinner at the Silo House, which is on the ground floor of a renovated grain silo near the center of the compound. Illuminated by candlelight and large, vibrant paintings on the walls, the dining room holds 10 tables and opens only for dinner Thursday through Saturday. Chefs/ hosts JR and Liz Matthews, who trained at the Culinary Institute of America in Hyde Park, New York, offer a prix fixe menu—by reservation only—of five courses with a salad, a choice of two appetizers, two soups, four five en trees, and three desserts. Dinner runs around $40 per person; diners can bring their own wine or cocktails.

With much deliberation, we make our first choices: portabella salsa with grilled pita chips, to start, for both of us, then creamy grilled asparagus soup for Cheryl and roasted Hatch chile posole for me.

After waiter Tamara Rossini-Laney delivers our salads-spring greens tossed with a blue cheese vinaigrette and topped with walnuts and sliced apples and pears—she reappears with a guitar and begins singing a ballad with a Mexican tempo. The unaffected contralto serenade seems perfectly natural in this setting, and we’re charmed, as are other diners when their turn comes. We later learn that our server is one of six women in a bluesy, folk-rock band called The Divas.

Our entrees arrive-chicken picatta for me and mojo Cubano pork tenderloin for Cheryl—each accompanied by grilled vegetables and the Silo House version of potatoes au gratin. My chicken picatta-a sauteed chicken breast topped with butter, garlic, lemon juice, white wine, and capers-is sublime. After tasting the magnificent combination of flavors, I decide that the other dishes I’ve eaten with this name were imposters.

After dessert-crème brûlée and peach cobbler a la mode-we walk back to the B&B, and I reflect on the gifts of the day: We’ve seen beautiful art, eaten great food, and met interesting people, all in a setting that celebrates the spirit of sharing. A special memory to share with a good friend.