From Lajitas to Presidio, the storied highway offers one of the best scenic tours of Texas 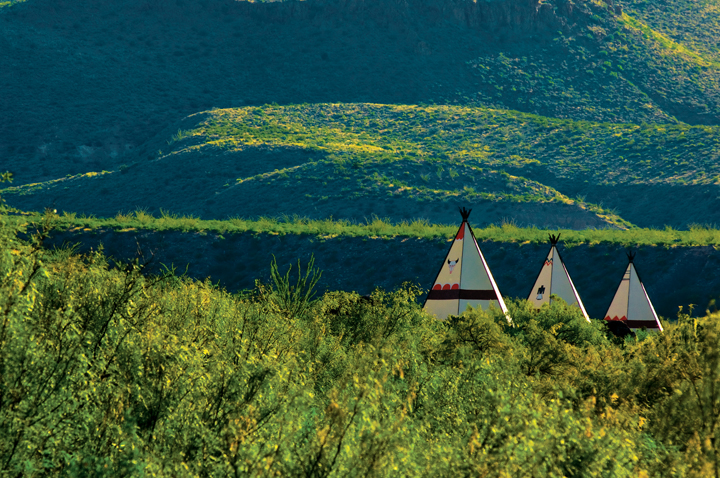 About 13 miles west of Lajitas on FM 170, this trio of roadside tipi-style shelters beckon travelers to stop for a few minutes and enjoy the view. (Photo by Kevin Vandivier)

Steering through a sweeping downhill curve in the winding, two-lane highway that runs within sight of the Rio Grande, I’m surprised to encounter football-sized rocks littering the pavement and quickly swerve to avoid them. Within seconds, I’m startled by a boulder with the dimensions of a big ice chest lurking menacingly in the oncoming lane. It’s late afternoon, and I’ve watched the dark clouds towering over the Chisos Mountains for a couple of hours, but now I’m witnessing the storm’s handiwork. I slow to a stop, wondering how to post a warning for oncoming drivers: A collision with this rock could be disastrous. Just then, I am relieved to spot a service truck edging slowly in my direction blocking the lane where the boulder sits waiting. The immediate danger is past.

I halt alongside the truck and ask the driver about the effect of the violent storm in the direction from which he’d come. He lets me know that the fast water flooding the arroyo crossings is receding, but that the sand and gravel remaining in the roadways make driving hazardous. His crew is dealing with the damage.

Even though this is not a typical day on FM 170 between Lajitas and Presidio in Big Bend’s Chihuahuan Desert Country, events like this damaging storm are part of the regular weather vocabulary for the region. Despite the occasional obstacles, this highway, which essentially defines the southern boundary of Big Bend Ranch State Park, offers an engaging driving tour.

And this area of the Big Bend Country deserves to be a destination in itself, particularly now that Big Bend Ranch State Park boasts the addition of the 7,000-acre Fresno Ranch, along with improved trails, interpretive markers, and facilities. Because of the driving distances, it’s something of a stretch to cover this entire territory from lodging in Fort Davis, Marfa, or Marathon, but it is possible to make a well-planned day-trip from one of those towns. 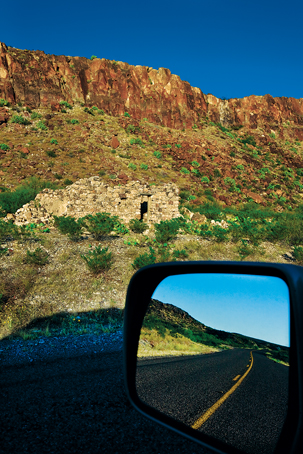 These ruins relate a tough chapter of local history. (Photo by Kevin Vandivier)

The first stop for any driving tour of this area is the Barton Warnock Environmental Education Center, which defines the eastern entry to Big Bend Ranch State Park. I always stop at the bookstore because of the well-chosen selection of titles that interpret the region’s history and natural features, but on this visit, I get a chance to visit with Park Interpreter David Long and Park Superintendent Rod Trevizo before I reacquaint myself with the Chihuahuan Desert flora by strolling through the two-acre desert garden.

Back inside, the Warnock Center’s interpretive displays explain the geology of the region, and that information goes a long way to helping you enjoy the drive along FM 170.  This also is a good place to purchase permits or update your maps of the area. And don’t hesitate to ask the staff for suggestions about the best hiking options, current trail conditions, or the latest on river status—these folks are in touch not only with the official information sources, but also the local rumor mill (an information source that should never be ignored).

FM 170 first sidles up to the Rio Grande just west of Lajitas, and the relationship remains close, at least for a while. About four miles along, you’ll encounter the cluster of adobeesque huts and the nearby faux chapel that constitute the film set known as Contrabando. As you’d expect, the buildings are more photogenic than functional, but offer an opportunity to speculate on life in the days gone by.

About 13 miles west of Lajitas, you’ll find three kitschy, tipi-style shelters at the roadside picnic stop. I’m stopping by on an October day, but the sun is fierce, so—even without a picnic—I take a few minutes to enjoy the spot of shade and survey the surrounding landscape, which is surprisingly green because of recent rains.

A few miles farther on, you’ll find the really big views as you encounter the Big Hill—the steepest paved grade (at 15 percent)  in Texas. Here’s another chance to enjoy the scenery at the turnouts, and part of why thoroughly exploring this 50-mile stretch of highway takes me most of two days.

I turn into the Colorado Canyon river-access point and take a few minutes to scan the steep cliffs with my binoculars: I’m always thinking I’ll spot a rare mountain sheep. Even though it’s unlikely, I’m the eternal optimist.

The primary access road to Big Bend Ranch State Park meets FM 170 as you approach Presidio. The 27-mile drive to the park’s Sauceda ranger station, although on improved and graded roads, requires well over an hour. Even though I’ve established this will be only a driving tour, I wish I’d allowed enough time for a couple of the shorter hikes to explore one or two of the trails. The quick jaunt to Los Ojitos seems particularly attractive because it’s a short walk to a desert spring and a clutch of cottonwoods that suggest a chance to see birds and possibly wildlife.

I’m planning to eat lunch in Presidioa rather curious outpost and the only commercial border crossing along the 420-plus miles between El Paso and Del Rio. But of more immediate interest to me is the history I learn when I stop off at Fort Leaton State Historic Site.

First, I note conflicting historical markers. The 1936 marker, set up to acknowledge the Texas Centennial, explains that the fort sits on the site where Spanish priests built Mission Apostol Santiago in 1683-84 and the Presidio del Norte de la Junta in 1759-60. A nearby marker from 1978 contradicts the earlier marker, saying that this is not the site of the mission and the presidio, but that Ben Leaton FM 170 defines the southern border of Big Bend Ranch State Park between the Barton Warnock acquired the building in 1848. Environmental Education Center Either way, I enjoy a 45-minute in Lajitas and Fort Leaton State tour of the property, imagining what 19th-Century life was like Historic Site east of Presidio. and learning about the area’s indigenous people, who were the target of conversion efforts by the Spanish when they built a series of missions in the area 300 years ago.

Even though I’d recently enjoyed a chile relleno lunch at El Patio, a classic, family-owned Mexican restaurant on the highway in Presidio, I’ve been told by folks in Terlingua that a restaurant called Escondida is well worth the search. I glance at a quickly drawn map given to me by David Long at the Warnock Center, and follow the The imposing geometric walls of the fortified trading post at Fort Leaton State Historic Site create stark shadows. highway across the Cibolo Creek bridge and take the Utopia Road turnoff just before the ”Y” that forces drivers to choose between Ruidosa and Marfa. The suggestion is on target: Escondida’s green enchiladas make for a memorable stop.

I’m going to drive back east to Terlingua this afternoon, but I decide to continue driving west on FM 170 past Presidio to Ruidosa and Candelaria, where the pavement ends. I continue even farther on the two-track dirt road that starts off westerly and eventually loops north to Valentine. But I turn back at the first creek crossing, deciding that this is a road for another Big Bend expedition.