Five hundred years after her first appearance, homes and businesses continue to pay homage to the patron saint of Mexico 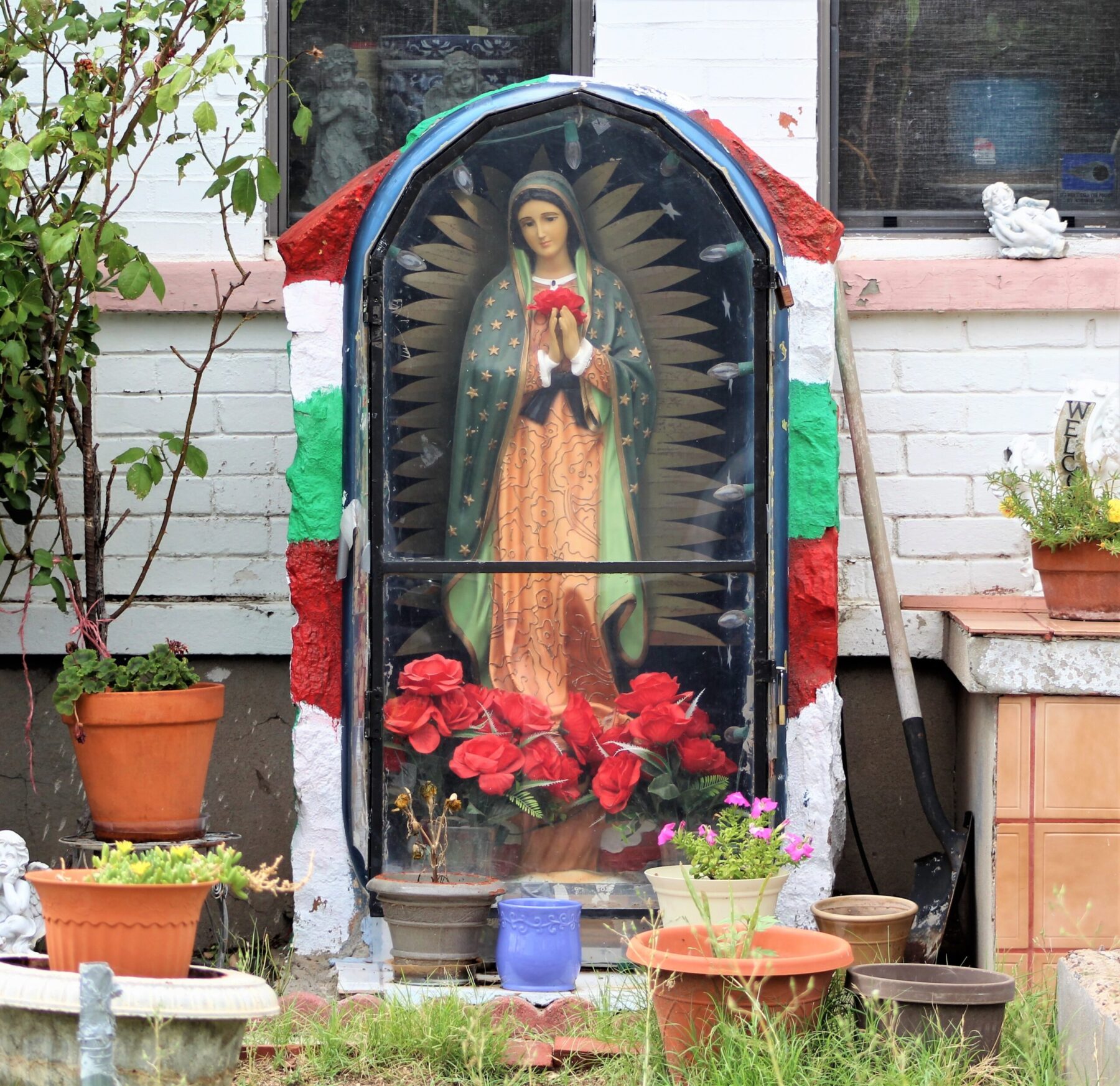 La Virgen de Guadalupe’s likeness is omnipresent in both Mexico and Mexican neighborhoods across the United States.

Almost 500 years after her alleged emergence on a hill in the northern part of Mexico City, La Virgen de Guadalupe remains an important part of Mexican culture and identity. She is the country’s patron saint, the mother of the people. Her appearance in front of the peasant Juan Diego essentially created, even if loosely, the bridge joining Indigenous and Spanish cultures. Depending on a person’s perspective, she’s a symbol of liberation or conquest (some scholars now see La Virgen de Guadalupe as the coopting of the Indigenous goddess Tonantzin). Because she’s been such an important figure since first materializing as an apparition in 1531, she’s even been placed on flags during battles. Wherever there are people of Mexican heritage, there will likely be something there to honor La Virgen de Guadalupe.

Today, La Virgen de Guadalupe’s likeness is everywhere from tattoos to murals in both Mexico and Mexican neighborhoods across the United States. Her presence is especially abundant around El Paso, where homes and businesses have outdoor altars dedicated to La Virgen de Guadalupe. They are a way of honoring her year-round in the same way ofrendas honor lost ones during Día de Los Muertos on November 1.

Some of these altars are in the open. Others are behind a fence or a lock and key. Some are colorful, with elaborate decorations that include lights so La Virgen de Guadalupe shines through the night. Others are simple, little more than plain statues. Some are figures protected from the sun in shells made of rocks and cement, and yet others are simply protected from the sun with wood enclosures. Some are small. Others are big, with the entire home seemingly dedicated to their devotion. And though they’re each different, they all honor La Virgen de Guadalupe.

These are just a few of the homes around El Paso—there are countless more—that pay homage to La Virgen de Guadalupe with altars. 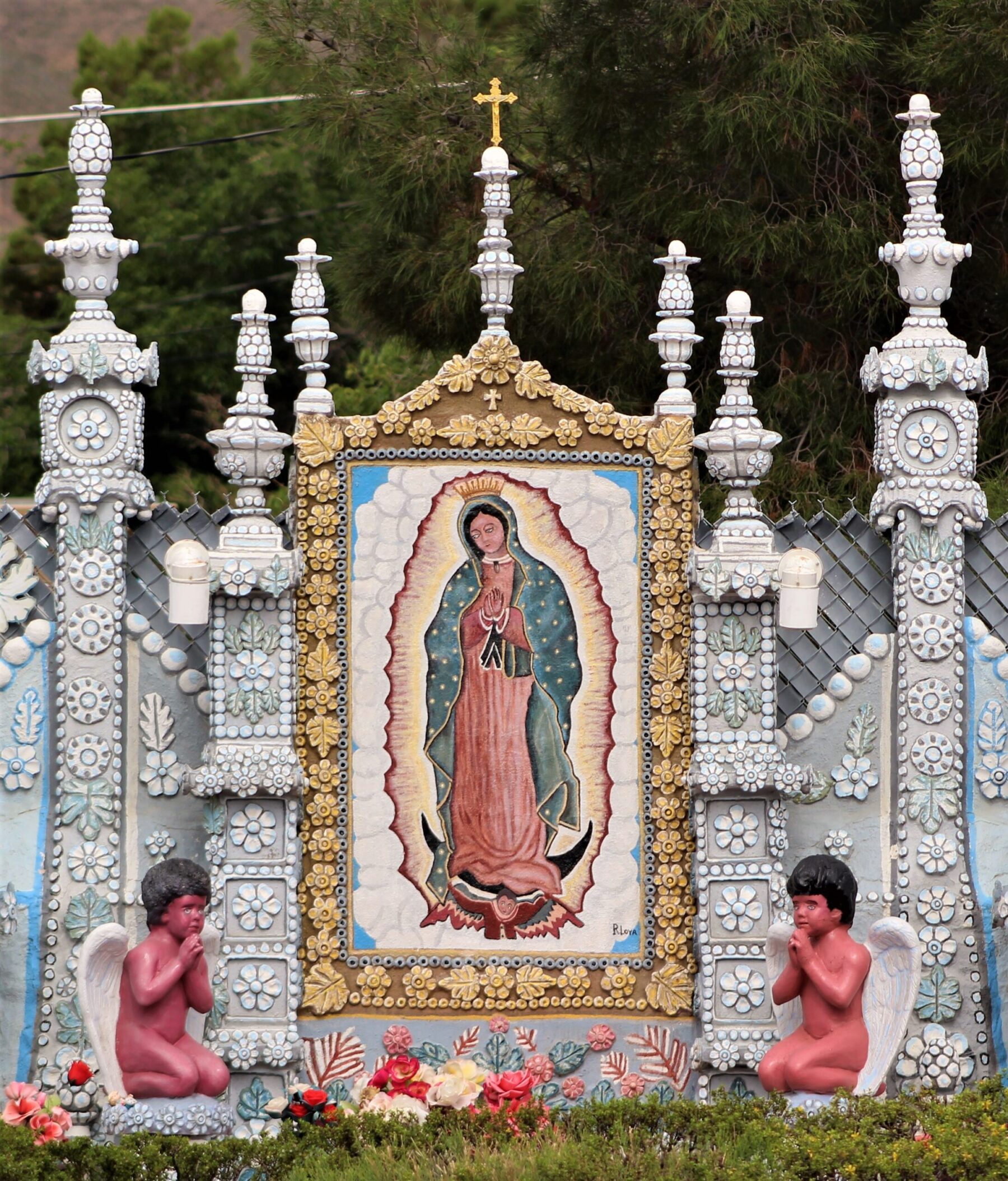 “Since I moved here, I slowly began doing this,” Rufino Loya says, in Spanish, of converting his home into what’s known as La Casa de Azucar—the “Sugar House.” Neighbors gave Loya’s house the name, saying it looked like a wedding cake. He’d work on his house after work and on weekends, and he’d spend his vacations doing the same. “They say that with time you begin to discover who you are,” Loya says. “I discovered I was a mason.”

Among the things Loya created was an altar to La Virgen de Guadalupe in 2006. “I don’t know how to draw, not even a ball,” he says, as he tried to figure out how to paint La Virgen on his altar. He finally decided he’d draw her. “I told La Virgen, you just guide me and I’ll move the hands.” 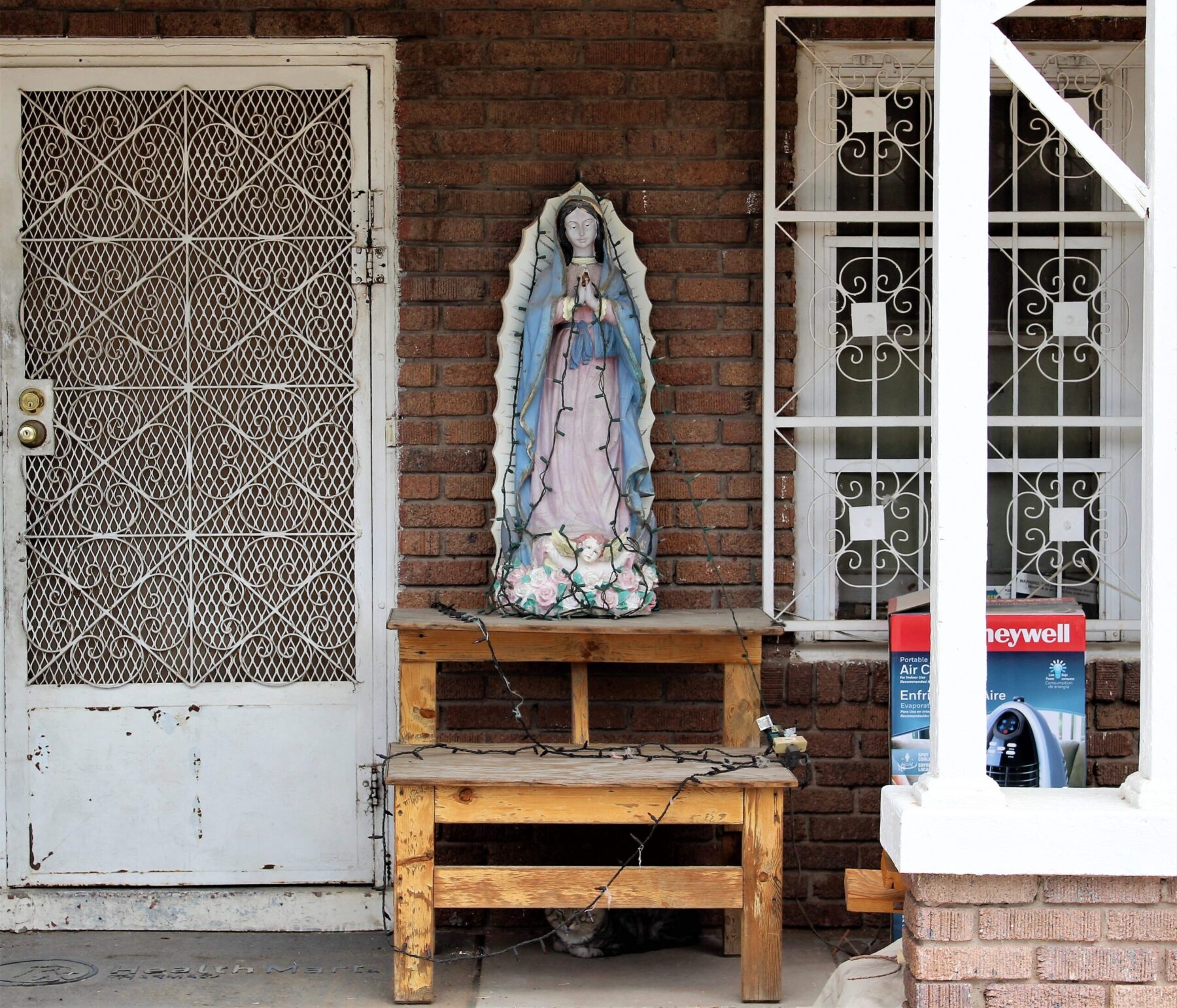 Near Oxford Ave. and Lamar St.

Linda Hernandez has had her altar for over 20 years. It sits atop a homemade wooden stand made of two-by-fours. “My husband is really Catholic,” Hernandez explains. “His family grew up that way, so he’s very into the Virgin Mary, saints, and all that.” 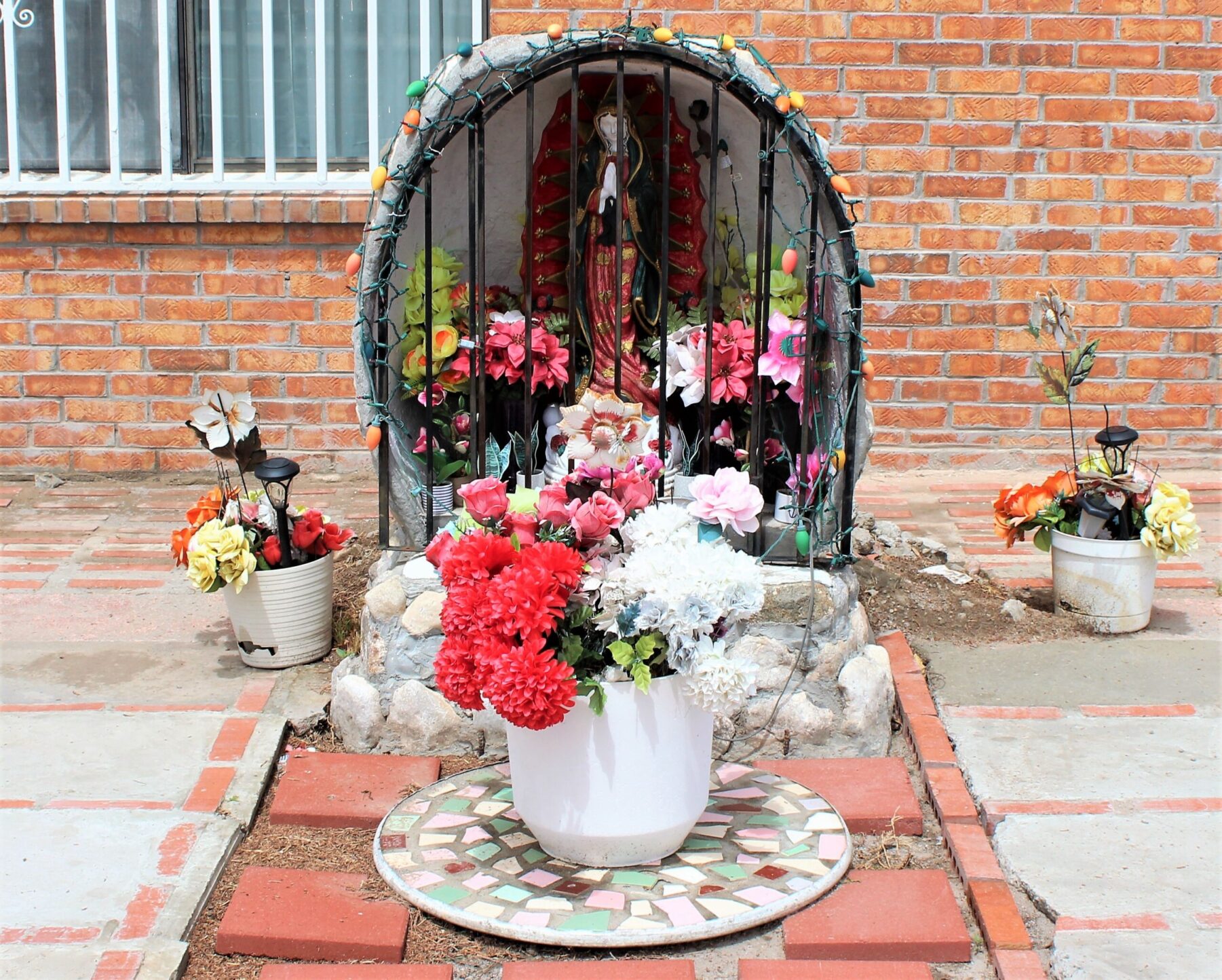 “It’s been there about 40 years,” says Ramon Chaparro, in Spanish, of his altar. Chaparro has lived in his house on the corner of the street next to US 54 for 49 years. “I help her maintain it, but it was my wife who decided to do this,” he says. “I just helped with mixing the cement. But it was her who thought to create this.”

He says people will stop at the altar to pray or to take photos. 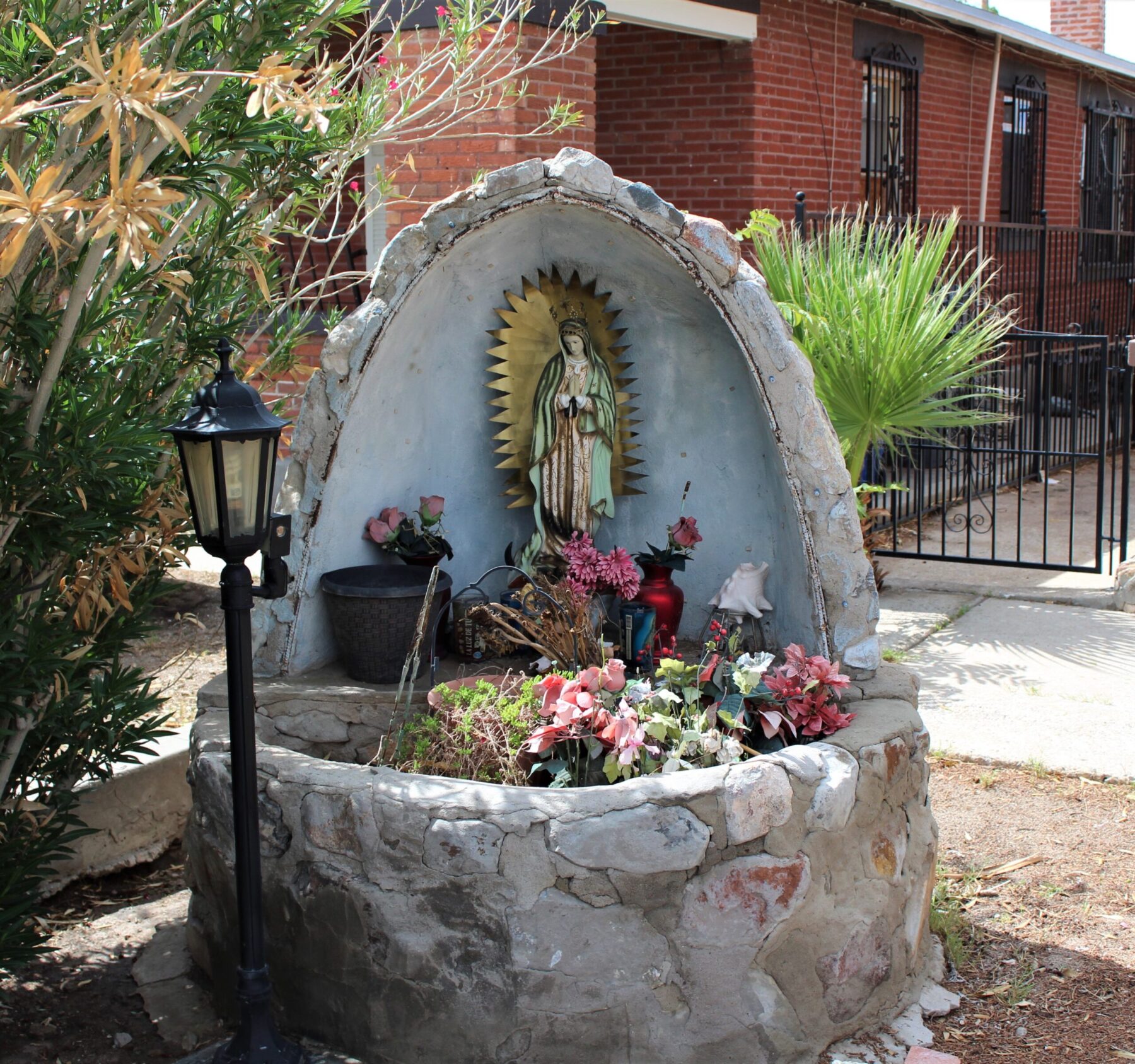 Near Trowbridge Dr. and Marr St.

“Since ’91,” Alejandro Marrufo answers when asked how long his altar’s been there. His parents had it built. “They’re from Mexico and, you know how it is with the culture and heritage, they bring all that over here.”

Since the altar is near the sidewalk, it’s accessible. “We get people who come here and, in their own ways, show an expression of something. They ask if it is OK if they light a candle. ‘Yeah, go ahead,’ I say.”