Evolving with the Times, Stanton’s In Alvin Celebrates 100 Years

The family-owned business first sold wood and coal, but today is best known for its award-winning meat market 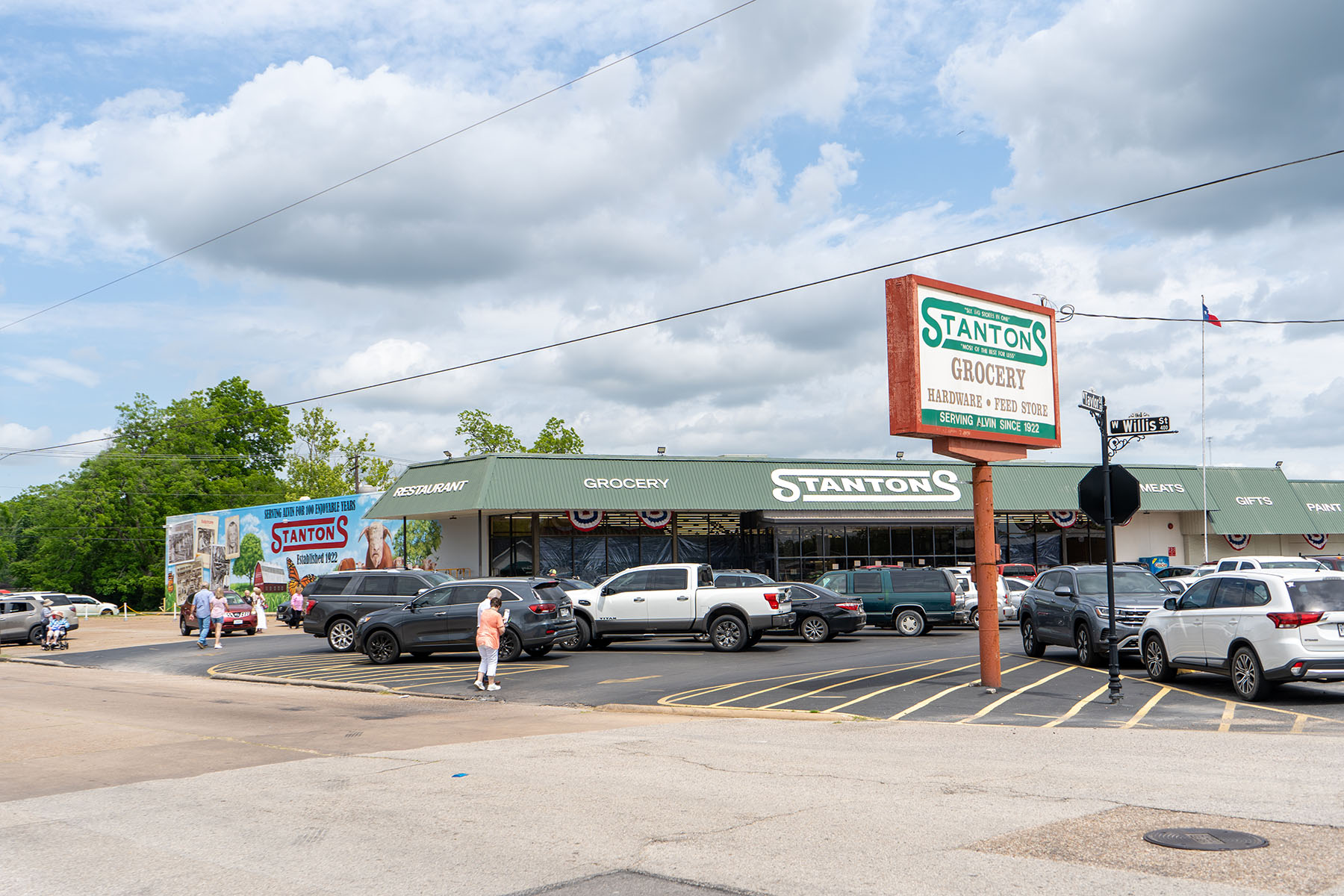 Present-day Stanton’s in Alvin has evolved to become a top-notch butcher shop and general store for both locals and travelers. Photo courtesy Stanton’s Shopping Center.

Not many mom-and-pop shops are able to stand the test of time, but Stanton’s Shopping Center in Alvin, about 30 miles south of Houston, has been going strong for 100 years. Its longevity can be credited to the Stanton family’s dedication and their ability to adapt to changing times.

E.J. Stanton and his son, George, opened the business in 1922 selling wood and coal along the railroad line under the name E.J. Stanton and Son. They soon branched out into feed and then groceries. In 1929 George inherited the business and expanded it by adding everyday household essentials, from appliances and housewares to clothing and fabrics to hardware. He also built an area that became known as “the fountain,” where customers gobbled up malts, sodas, and the shop’s famous burgers.

By the 1930s, he introduced Hereford cattle to Alvin to bring quality beef to the Gulf Coast for the first time. Over the years, the store has grown in both size and scope to encompass 30,000 square feet and a wide variety of merchandise.

The Stanton family has grown alongside it, and subsequent generations have taken over the business. The store was renamed Stanton’s Shopping Center in 1957, when George’s son Warren entered the business, and today it is operated by Warren’s sons, Allen, Neal, and Paul. On any given day, Allen is likely to be found greeting and assisting customers in the store. He recalls, “At one time Stanton’s was the store, not just for Alvin, but for all of Brazoria, Fort Bend, and Galveston counties.”

With the rise of big-box competitors, Stanton’s has survived by diversifying and specializing its offerings. “You have to change with the times; if you don’t, you’ll become extinct,” says Allen. “In the early 2000s, we started getting more into sausage making, bacon making, and wild-game processing. Now that’s our calling card.” In fact, Stanton’s won the Grand Champion Bacon title from the Texas Association of Meat Processors Convention in 2014.

Stanton’s produces its own boudin, bratwurst, bacon-wrapped stuffed meats, and exotic-meat sausages made from the likes of elk, buffalo, wild boar, alligator, and kangaroo. Of course, the Stanton brothers also still provide high-quality beef, following in the family tradition.

In advance of Stanton’s centennial anniversary celebration in May, they commissioned Houston-based artist Anat Ronen to distill the store’s 100-year history in a mural on the side of its building, located on North Taylor Street. The resulting mural, which spans about 120 feet in length, pays tribute to the Stantons, with painted recreated photographs of individual family members, and portrays Alvin’s flora and fauna—a green pasture, butterflies in flight, a herd of Hereford cattle—as well as the bright red barn that still serves as Stanton’s feed store to this day. “I wanted to bring more to the mural than just the history,” Ronen says. “I also wanted to give it visual appeal so that it will catch the eye.”

And catches the eye it does. According to Allen, the mural has helped draw more attention to the store and its history. “We’re trying to reach out to a bigger audience to tell our story,” he says. “People come by to take pictures with the mural. It lets people know that we’re still here and we’re very much a part of the town. I’m hoping to keep Stanton’s going as long as we can.”