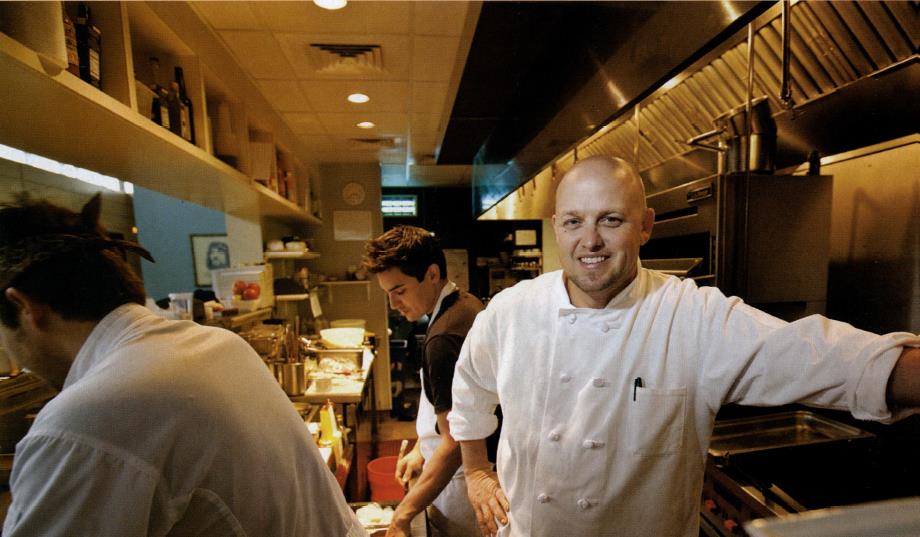 Chef James Holmes of Austin’s Olivia turns to local ranchers and farmers for meats and produce.

These days, despite a growing interest in buying local produce and meats, few people remember when meals depended on garden vegetables, the eggs from the chicken coop, and meat from a recent hunt. Making use of every edible bit, especially when it came to animals, was a concept born of necessity and respect. It’s an economical approach to eating that predates the modem restaurant if not the written record of human history.

As a food writer in Texas for the past few years, I’ve noticed that some inventive chefs are subtly introducing this age-old philosophy to modern diners. They’ve even given it a clever name: “nose-to-tail cooking.” Along with standard fare such as bacon-wrapped filet mignon and herb-roasted chicken, diners now find dishes made with pork belly, rabbit kidneys, or head cheese—a terrine that has appeared in peasant cuisines across Europe for centuries.

So, on a recent restaurant road trip, I decided to expand my comfort zone. First up: Olivia, Chef James Holmes’ contemporary-meets-rustic eatery in Austin, where the menu changes daily according to what’s available from a select circle of local farms and ranches. Holmes’ Chef James Holmes of
devotion to the “locavore” movement has paid off: In September 2009, Bon Appetit magazine lauded Olivia as one of the “Top 10 Best New Restaurants in America.” My dining companion and I opted for the extravagant, 10-course tasting menu, and Chef Holmes smiled and advised us to keep an open mind. We settled into a nook at the cozy, wraparound bar and prepared for our culinary adventure.

We charted new terrain gingerly and grew bolder as plates arrived to the table. Plump gnocchi in sage cream sauce, herbed French fries served with lemon aioli for dunking, and mussels steamed in saffron broth gave way to a slice of lamb’s heart wrapped with jalapeño and a ribbon of bacon, then grilled and drizzled with yaupon honey. Next, we indulged in thin slices of pig’s ear, pickled in jalapeño-infused vinegar, and served with roasted green beans and crispy French fries—a beautiful interplay of chewy and crunchy textures with briny and spicy flavors. And finally, Chef Holmes brought us a small plate of “lamb frites”—tender morsels of fried lamb’s testicles served with a tangy Dijon sauce. Marvelous. I now have a new comfort zone.

The nose-to-tail concept has made a slow but steady comeback in the past decade, with chefs throughout Europe and the U.S. devoting their kitchens to going “whole hog”—as well as whole lamb, beef, rabbit, and fowl. “From an ethical standpoint, if you respect what you’re eating, then you owe it to the animal to use every bit of it,” Holmes told me.

In Dallas, Chef Scott Gottlich relies on classic French culinary techniques to employ this concept in his daily menus at Bijoux, an intimate restaurant in the
Inwood Village shopping center. Dark woods and heavy, Versailles-inspired tapestry curtains create an Old World ambiance here, and Chef Gottlich devotes similar care to the presentation and complexity of his dishes. Daily three-course and five-course prix-fixe menus are the way to go here, as they allow diners to sample a nuanced range of Chef Gottlich’s creations, which might be buttery day boat scallops served with pork cheek-stuffed ravioli in bacon-mustard vinaigrette, or a trio of seared duck breast, smoky duck confit, and foie gras-shepherd’s pie.

For Chef Gottlich, the “nose-to-tail” trend challenges him to be a better chef. “Classic cooking evolved from a time when cooks didn’t have refrigerators or
freezers to keep foods fresh,” he says, “so they used the whole animal, and learned how to cure meats, make pates, or serve untraditional parts of the animal. Cooking this way today demonstrates efficiency and a mastery of techniques.”

In Houston’s eclectic Montrose neighborhood, Feast (another of Bon Appetit’s 2009 “Top 10 Best New Restaurants in America”) has also garnered critical
acclaim for its nose-to-tail commitment. Growing up in West Sussex, owners James Silk and Richard Knight had been exposed to offal (organ meat) in pubs and restaurants since they were children. When they, along with Silk’s wife, Meagan, opened Feast in 2008, they wanted to introduce diners to a style of cooking that the British have enjoyed for centuries.

The decor of Feast—with its dark wood floors and timber-framed rooms, and handmade wooden tables with distressed wooden chairs—made us think of
a British country tavern. As we sampled a hearty pea-and-bacon soup, rich rabbit hearts and kidneys served on toast with demi-glace, and roasted beef marrow which arrived warm, buttery; and still in the bone, with a pick and a tiny spoon—indeed we felt as though we had traveled far beyond the borders of Texas.

More and more chefs are committed to giving us a taste of an age-old tradition where life on a farm meant an abiding respect for the natural bounty that was given. “It’s our responsibility to use as much as we can of what we have,” says Chef Gottlich. “As they say, it’s not in good taste to waste.”