Hippowood? Hutto Plays Host to the Filming of an HBO Max Series that Recounts a North Texas Murder

Elizabeth Olsen stars in 'Love and Death,' which HBO is filming around Central Texas for release next year 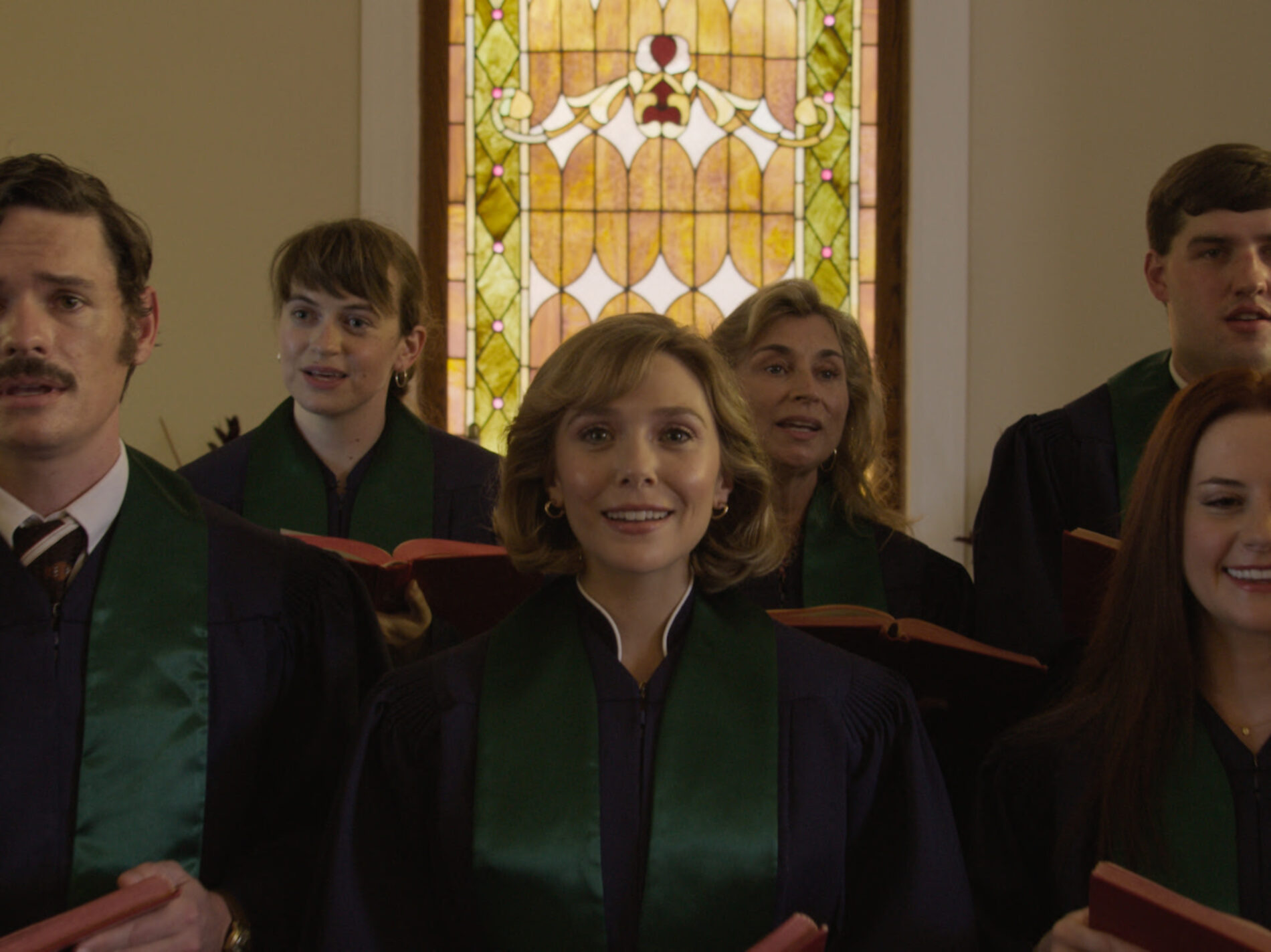 Elizabeth Olsen stars in “Love and Death,” which is being filmed in Central Texas, including this scene at Hutto Lutheran Church. Courtesy HBO Max.

The upcoming series recounts a true-life murder tale that rocked the North Texas suburbs more than four decades ago. In 1980, Candy Montgomery was charged with murder in the death of her friend and fellow church member Betty Gore. Prosecutors accused Montgomery of striking Gore 41 times with an axe, reportedly after Gore had an affair with Montgomery’s husband. Montgomery was acquitted on self-defense in a verdict that made headlines throughout the state.

Love and Death crews have been filming in Hutto, Lockhart, and Kyle as a part of a shooting schedule expected to encompass nearly a dozen Central Texas towns and cities, according to Stephanie Whallon, director of the Texas Film Commission. Other communities where Whallon expects production activity include Austin, Coupland, Georgetown, Killeen, Kerrville, Seguin, and LaGrange.

“I would say it’s a pretty large undertaking,” said Whallon, whose commission is part of the governor’s office and oversees a film-incentive program that lures productions to Texas. The show is expected to spend $70 million in Texas during production, employing 500 people weekly, with an additional 200 extras each week, according to Diana Blank-Torres, economic director for the City of Kyle.

With Oscar Award-winner Nicole Kidman as an executive producer, Love and Death stars Elizabeth Olsen as Montgomery. The original limited series is set to debut in 2022.  Yoonie Yang, a spokeswoman for HBO, said in an email that the exact release date hasn’t been announced.

The story line, says HBO, is about “Two churchgoing couples, enjoying small town family life in Texas, until somebody picks up an axe.” The slaying, which spawned a book, numerous magazine articles, and a 1990 television movie, occurred in Wylie, a now-burgeoning Dallas suburb.

For Hutto, a farming town northeast of Austin that’s grown as a suburb in recent years, Love and Death is the latest of more than 20 films and commercials that have been at least partly filmed as part of an aggressive arts and culture campaign. Former Mayor Mike Fowler has labeled the community “Hippowood” in tribute to the town hippopotamus mascot. Hundreds of concrete hippos of all sizes are scattered across the town of more than 30,000 people in honor of the hippos that escaped from a circus train in Hutto more than a century ago.

Fowler said the film crew set up a base camp in Hutto’s Fritz Park and posted street closure signs during three days of filming in September. Scores of workers and vehicles converged on the park during a shoot inside Hutto Lutheran Church, one of the town’s landmarks.

Erected by Swedish immigrants in 1902, and featuring a bell tower steeple, a white exterior and stain glass windows, the church was deemed an ideal set by HBO scouts who spotted it by chance while combing Central Texas for shooting locations, said Pastor Katie Wegner. The scouts left a message on her phone and later received permission from Lutheran officials to include the church in the series.

“They put in long days and worked hard,” Wegner said, while also stressing that she was prohibited from discussing details under an agreement with HBO. The crews were careful to respect and protect historic artifacts in the church, she said.

In Lockhart, about 60 miles to the south, HBO crews also filmed portions of Love and Death in early October, about the same time filming was underway for AMC’s horror drama, Fear the Walking Dead, said Kim Clifton, director of operations for the Lockhart Chamber of Commerce.

“They were kind of all over the place,” she said.

Crews took over a downtown restaurant for a week, repainting the exterior, and modified another building to look a gas station, said Clifton.

Filming in Kyle, another booming Austin suburb, is taking place at a 110,000 square-foot building at Kyle Crossing, an industrial business park. “We are excited to see that Kyle’s potential as a set location is being realized,” said Blank-Torres, the economic development director.