Holidays with Gruene’s Cowboy Kringle: Meet the Man Behind the Beard

Along with having his picture taken with fans young and old, this Santa doesn't mind if you pull his beard 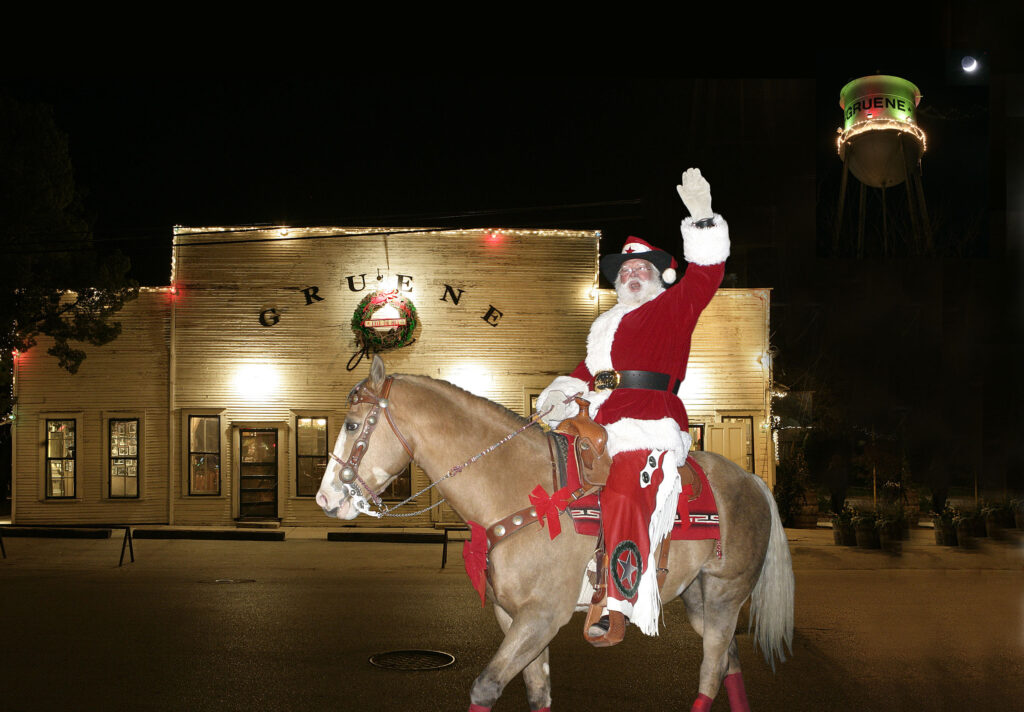 When you’ve played Santa Claus for as long as Gene Davis has, you get accustomed to the occasional crying child, pullings of the beard, and unusual Christmas present request. For the past nine years, Davis has been Cowboy Kringle, the star attraction at the annual Holidays in Gruene, a series of events that also features a gift market, turkey trot, special Thanksgiving show with Two Tons of Steel, and Pony Express ride, among other festivities.

For Davis, his role as Cowboy Kringle involves not only having his picture taken with children, adults, and families while adding gift requests to an ever-growing list. The gig also has him riding in on a horse, handing out candy canes to thousands of visitors lining the streets, and enduring dusty, warm December days in a heavy cowboy Santa costume. Still, like the jolly man he emulates, he takes it all in stride.

“I really enjoy being out there in Gruene,” Davis says. “I enjoy the people who come out there. It’s a real hospitable place—you’ve got the dance hall and the merchants down there, and they’re all really good people.”

Davis, who works for a transportation company when not in costume, started his Santa career 30 years ago with San Antonio-based Santa Claus Express. He showed up when they needed a fill-in Santa and was given a job on the spot.

“I was like, ‘Wait a minute, I’ve never been a Santa before,’” he recalls. “They gave me a brief rundown, and ever since I’ve been doing it. That was a long time ago. We were doing it back when Montgomery Ward was still in action.”

Over the years, Davis has portrayed Santa at events all over the state. He’s honed his skills, including perfecting a “ho ho ho” to the point it comes out of him naturally in conversation. Having raised three children with his wife, he’s now a grandpa to “a parcel of grandchildren,” so he knows how to calm down any anxious little ones. But, as he points out, he also has his helper elves to assist him on those occasions.

Scattering his speech with endearing, folksy terms that roll off his tongue like honey, he calls children “buckaroos” and “young’uns.” He describes the “little-bitty babies” he meets “as cute as a bug’s ear.” And if you ask him how long he’s been Santa, he tells you “a month of Sundays.”

As for the beard, it’s all natural, he says. To get it to just the right amount of bushiness by the holidays, he starts letting it grow out in July. In the early years, he admits he would have to lighten it using different treatments. “My first look looked like cold cream,” he says. “I looked more like Moses than I did Santa.” But the beard has whitened with age to the perfect pure-as-the-driven-snow hue. Speaking of age, he won’t reveal his. “I’m as old as father time,” he says, before letting out a ho, ho, ho.

The historic town of Gruene, just north of New Braunfels, has been celebrating the holidays with Cowboy Kringle since around 1984. When the previous Cowboy Kringle was growing too old for the role, Davis didn’t need to audition for the job. He had years of experience, and perhaps more importantly, he knew how to ride a horse, having grown up learning how to ride and working at stables. “I was knee-high to a grasshopper the first time I got on a horse,” he says.

As Cowboy Kringle, he wears chaps, cowboy boots, a big belt buckle, and a cowboy hat topped with a Santa cap. He has two suits, so he can wear one while the other one is being cleaned. “When I’m out there with all that dust, I tell you, it gets kind of dirty,” he says. “You can’t go a full season with one jacket.” It also gets hot, especially around people, but he adds, warm days keep his cheeks rosy.

Before COVID-19 hit in 2020, thousands would show up to get a picture with Cowboy Kringle. “We had lines that reached all around the building and down the street,” Davis says. But in 2020 and 2021, the event has been adjusted to protect guests and Davis. Photos are by appointment only (go to cowboykringle.com to reserve a time). According to Davis, the time slots are three minutes apart, so you need to be quick and not dilly-dally around when it comes to telling him what you want for Christmas. Lately, iPads and earbuds have become hot items, along with perennial popular requests for dogs, cats, and Barbies. Sometimes he gets requests for snakes or people wanting to see family that’s far away.

It may surprise some that Cowboy Kringle misses getting his beard pulled these past couple of years. “When they pull on your beard, they know that, hey, this is the real guy, this is the Cowboy Kringle,” he says. “There’s no doubt about it. I do miss that. It’s keeps things interesting and magical. Every visit is different and special, but these last years have been challenging with the distancing.”

So what’s the best thing about being Cowboy Kringle? “The smiles,” Davis says. “People are just happy to see you. Those little buckaroos, I tell you, they’re adorable. Then you get the older ones—we’ve even had some in their 90s, and they’ve never seen Santa before. They come see Cowboy Kringle and they smile and it’s an amazing thing to see.”