Since launching in 2013, the company has designed its campers as an alternative to the RV 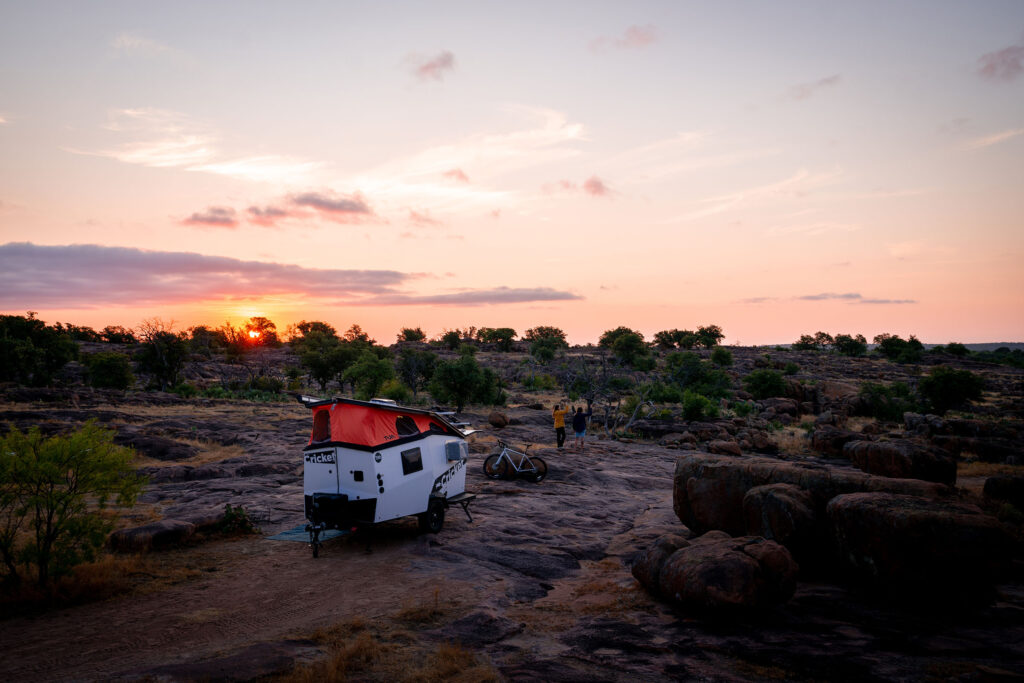 Garrett Finney grew up camping in the northeast United States. After moving to Texas in the early 2000s to work at NASA’s Habitability Design Center, he took his family on a campout in the middle of a typically hot Texas summer. The experience inspired him to find a more comfortable way to enjoy the outdoors.

After a fruitless search for the kind of vehicle he had in mind, Finney decided to design one himself. The result: the Cricket, a trailer with room to sleep two adults and two children, a pop-up screened roof, and plumbing and electricity. It is light enough to be towed by most 4-cylinder engines and, at 15 feet long, able to fit in most garages.

He built a couple more, took one to a trade show, and in 2013, started TAXA Outdoors. (By then, he had also quit his NASA job.) The company, which has its headquarters and a manufacturing facility in Houston’s Heights neighborhood, sees its demographic as tent campers, backpackers, and outdoorsy types who want a bit more comfort—not sleeping on the ground or cooking in the rain—while still getting that outdoor adventure experience.

“We always knew there was this huge set of people who would never want to buy an RV, because it doesn’t speak to what they want to do,” says TAXA President and COO Divya Brown. “We want you to spend 95 percent of your time outside and come back to this awesome home base. It’s important to be outside, but you don’t have to sleep on the ground to have a meaningful experience.”

In addition to the Cricket, TAXA builds three other models. The Tiger Moth sleeps two adults and features a slide-out camp kitchen and large side hatch for easy access (and breezes). A built-in electrical system, external water system, and pre-wired solar inlet mean it can go seven days or more off the grid.

The 19-foot, four-person Mantis has an electrical system, shower and toilet, AC, and a galley kitchen. The bed converts to a dinette and the bunk system into a couch.

Woolly Bear is a utility trailer with a full-size outdoor kitchen and elevated tent platform, with ample storage, large cargo deck, and a rear accessory hitch that hold bikes, boards, and boats. Brown calls it the ultimate base camp.

Notice a theme to the names of the campers? According to Garrett, TAXA takes its name from the root word of taxonomy. “You might recall from ninth grade biology that the word taxonomy refers to the classification of plants and species,” he says. “When I set out to create an outdoor industry company, I thought that TAXA would allow me to name products after everything outdoors. So far, our rolling products are named after insects. Expect some other taxonomy classes for future developments.”

Not for the casual camper, these trailers are an investment: The prices start at $12,000 (Woolly Bear) to $42,000 (Mantis). Overland models, which have higher-clearance and more durable tires and suspension, cost more, as do some options.

A website questionnaire helps match customers with the product best fitting their needs, and a deposit reserves a production slot. Finished products are distributed through dealers across the country. Since its launch, TAXA has seen 200% year-over-year revenue growth, and given increased interest in the outdoors fueled by the pandemic, Brown says their current eight- to 12-week turnaround could grow longer.

The off-grid option means that, in addition to places like national and state parks, adventurers can head for undeveloped public lands and beaches. Brown recommends searching for sites at Campspot.com and the Bureau of Land Management’s camping on public lands site (see the “where to camp” section under “Visit”).

We all lead busy lives, but you don’t have to go far,” Brown says. Just far enough to get into the outdoors.