How I Overcame My Fear of Texas’ Turbulent Weather

An ode to meteorologists in Houston, Lubbock, and Dallas who quelled my fears in the eye of the storm 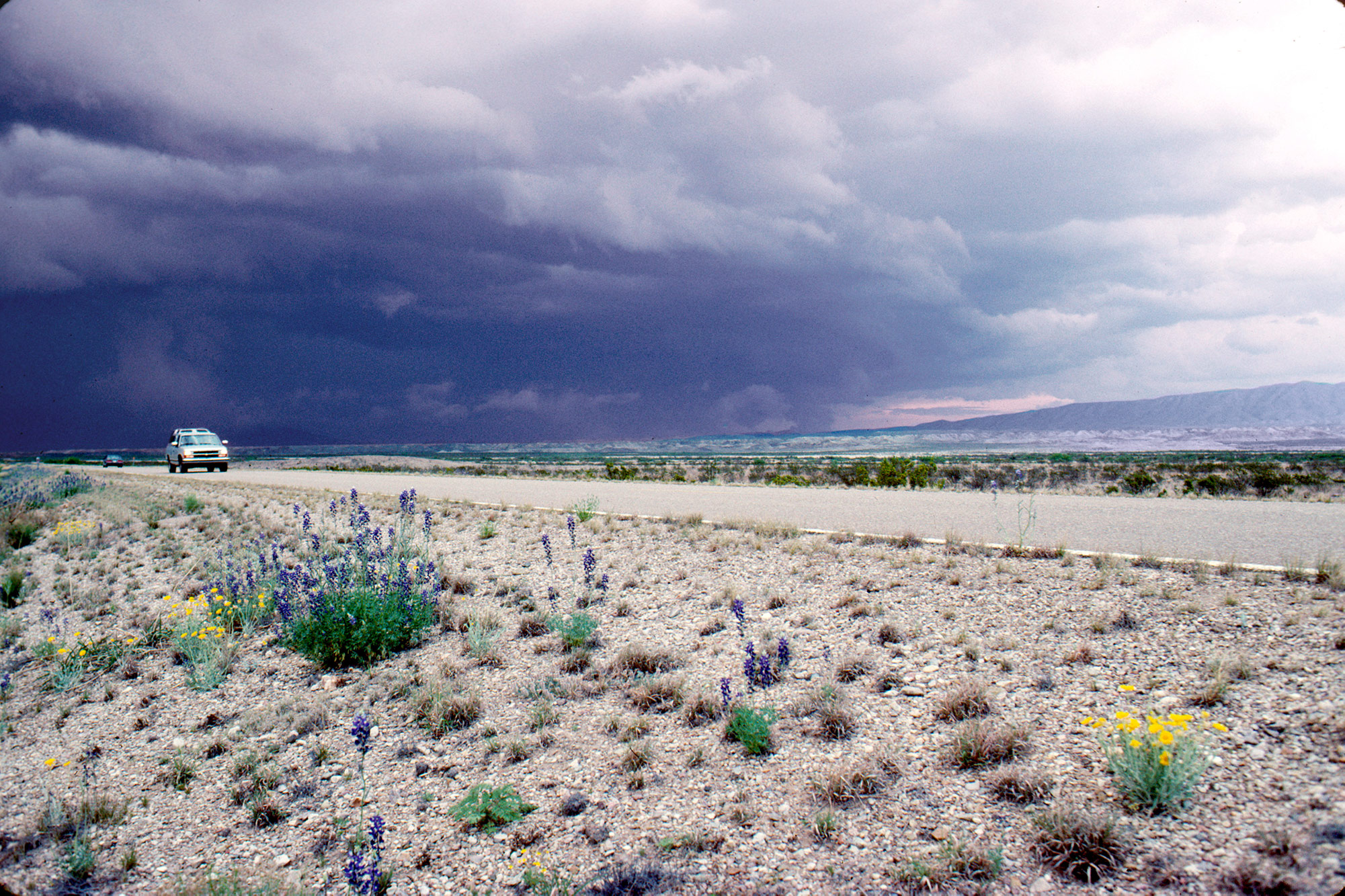 A storm brews near Big Bend National Park in 1991. Photo by J. Griffis Smith, from the TxDOT archives

I’ve been intensely afraid of storms since I can remember. Even on a sunny day, my eyes were fixed on the clouds passing by, looking for any detection of bad weather to come.

During a thunderstorm, severe or not, my heart would beat so loud I could hear it. With each clap of thunder, my body would jump, fear pinballing down my spine, sending me airborne. My index fingers pressed into my ears for solace, fear overriding any sense of embarrassment from the other kids playing and painting as if nothing was going on.

But partway through preschool, my teacher noticed I was growing a little calmer. She wrote to my parents, “We left the playground and Jennifer told me, ‘I watched the weather report last night. It’s 60%.’ I laughed. I’m almost sure she is the only 5-year-old who watches the news!” It was 1989 when I’d started watching the weather report—more specifically, chief meteorologist Frank Billingsley of Houston’s KPRC TV station—as a way to quell my fears by anticipating scary weather. His forecasts have seen worried Houstonians through everything from Tropical Storm Allison to hurricanes Rita and Harvey to the record-breaking freezing temperatures and snow this past February.

“Like any news story, weather is a story,” says Billingsley, who’s been with the station since the late 1980s. Educated in both meteorology and journalism, Billingsley says there are three qualities of great TV meteorologists: They are scientific, they provide a sense of relief, and they are trustworthy. Perhaps this is the greatest role of a Texas TV meteorologist: to believe in science, from urgent storm warnings to long-term issues like climate change, and translate that science so the public can plan for the future.

Billingsley’s clarity and reassurance sustained me through high school, and chief meteorologist John Robison of KCBD in Lubbock helped me wrap my mind around northwest Texas weather when I was a student at Texas Tech University in the mid-2000s.

While Billingsley must figure out exactly what information matters to millions of viewers across some of Texas’ most densely populated counties, Robison has the unique challenge of making sure his weather report is tailored to a variety of viewers with specific needs. The surrounding agricultural communities rely on Robison’s forecast because their livelihoods do. “They’re worried about freezing because their crops depend on it, which in turn affects their life,” Robison says. “We always try to watch for those nuances.”

Billingsley and Robison’s weather forecasting seems like an awful lot of pressure that most would crack under. “I’ve always tried to remain calm on-air,” Robison says. “My heart might be going 150 miles an hour, but if I look scared, [the viewers] are going to be scared, so I do my best not to look that way.” Calm and informative reports helped me when familiar severe weather threatened the city, but it helped even more when unfamiliar West Texas winds and dust storms struck. It only took one instance of my dorm room turning burnt red, as the expansive West Texas skies filled with dust, for me to know I had to stay connected to my local weather forecast.

After enduring otherworldly dust storms and ice storms in college in West Texas, I moved to the Dallas area after graduation. Though Houston has violent, unpredictable weather that bends to the fickle mood of the Gulf, tornadoes—my ultimate meteorological fear—are much more likely to occur in North Texas. 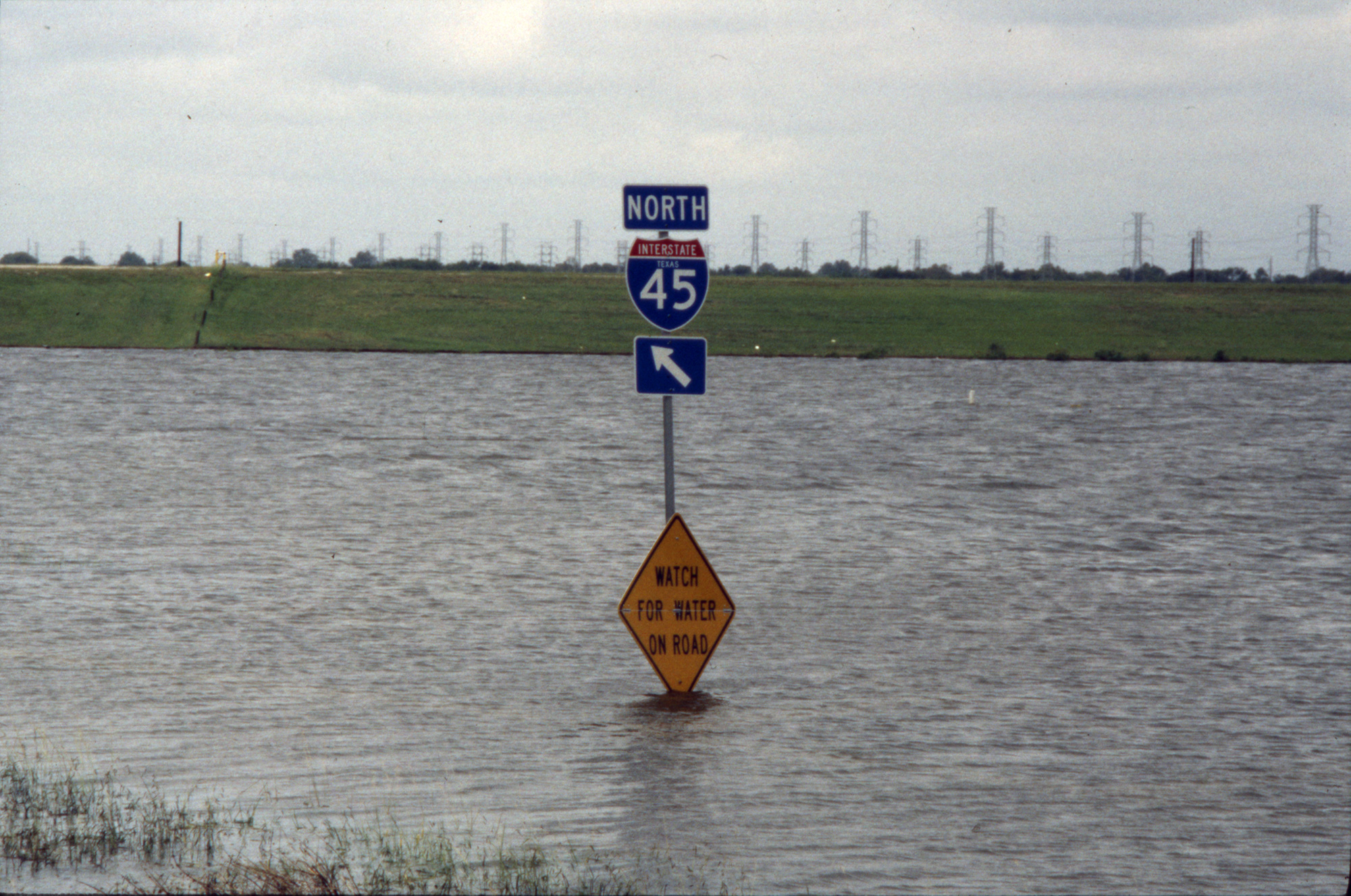 Interstate 45 in Harris County flooded in 1998. Photo by Kevin Stillman from TxDOT archives

One night after a particularly stressful workday in 2008, I was making dinner in my Plano apartment. I had just polished off a sad dinner of a salad and a cheesecake brownie when I noticed a distinct change in the air. I quickly turned on NBC-5 to see senior meteorologist David Finfrock gesturing towards a red and purple line of thunderstorms marching across the Metroplex. Before I had time to process the report, my thoughts were interrupted by the eeriest sound I’d ever heard: tornado sirens.

Lights flickered as David’s voice went in and out. My heart felt like it might hop out of my throat as I ran to my bathroom to take cover. Gratefully, no tornadoes touched down by my apartment, though folks in other parts of the Metroplex weren’t so lucky. I felt as if I’d fainted and come to when the sirens stopped, isolating the concerned but authoritative vocals of Finfrock, assuring us that the coast was clear.

To help me cope with my fear, I’ve become an amateur meteorologist. I’m now a certified severe weather storm spotter for Harris County, and I hosted a hurricane season preparedness convention while quarantining with my sisters last summer. My internal fear remains intense, but TV meteorologists have kept my fear from becoming debilitating. “I’ve always thought it’s important for people to understand weather because if they understand it, then they can take control of their fear,” Robison says. It is not hyperbole to say that learning how to anticipate scary weather allowed me to grow into a functioning adult.

Unlike the late ’80s when Billingsley joined KPRC, consumers have all sorts of sources to turn to for weather forecasts. From Instagram to YouTube and beyond, we have access to an unprecedented amount of data. And yet, thousands of viewers tune in every night for the local weather report.

“I think it’s the voice of trust,” Billingsley says. “That’s key, especially now with so much information on the internet and a million cable channels. You turn on the TV, where you could see that person and hear that person and their demeanor and the body language and everything about them earned your trust, time after time.”