A trip down memory lane at La King's confectionery in Galveston 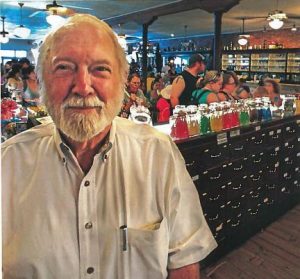 Staring wide-eyed at neatly stacked rows of chocolate truffles, blocks of creamy fudge, and chocolate-dipped pretzels, I’m in awe. And a little giddy. Nothing brings out the kid in me quite like an old-fashioned candy store. And in my opinion, the best place to rekindle that childhood nostalgia is La King’s Confectionery, an iconic candy shop and ice cream parlor on Galveston Island. For more than 37 years now, proprietor and “official taster” Jack King has been keeping old-time confectionery traditions alive in the heart of Galveston’s Strand Historic District. He has made a career of serving up tempting treats to generations of tourists, families, and locals alike. “It’s a fun place. People who came here as kids 20 or 30 years ago are now bringing their kids here,” says Jack. In fact, La King’s has become one of the island’s most popular attractions. And it’s easy to see why.

Stepping into La King’s, you experience a slice of nostalgic Americana charm that only an 1800s hardware store-turned-candy shop could provide. Red brick walls, antique fixtures, vintage toys, and pine floors give the interior an old-fashioned ambiance. As you walk in, you’ll smell the rich aroma of fresh-brewed coffee, which mingles with the scent of chocolate and peppermint.

On the right, rows of wooden bins overflow with individually wrapped taffy pieces. Glass cases display a variety of white, milk, and dark chocolates, plus caramels, squares of fudge, and chocolate-enrobed cookies and pretzels. Mounds of decoratively drizzled artisan truffles mingle with more traditional
treats such as peanut butter cups and chocolate-covered nuts. Classic jellies, candy corn, sours, and rock candy the latter stocked in vintage apothecary
jars-offer sweets for those not besotted by chocolate.

A glistening, white-marble soda fountain runs nearly the length of the store. Here, soda jerks in bow ties make shakes, ice-cream sodas, malts, and floats, and serve scoops. Even the ice cream is made in-house. La King’s is the only place you can taste Texas’ oldest ice cream brand, Purity Ice Cream, which was founded on Galveston Island in 1889. “You can’t hardly call yourself a confectionery if you don’t make your own ice cream,” notes Jack.

Saturday afternoons at La King’s buzz with activity as customers line up for sweet treats. Smiles and laughter fill the room as families and old friends settle
into heart-backed, wire-frame chairs; there’s rarely an empty seat in the house.

And that’s the way Jack likes it. Growing up in and around the candy business, Jack developed a deep fondness for candy-making. His father, James  “Jimmy” King, began as a candy-making apprentice in 1927, working for St. Regis Confectionery in Houston, across the street from the famous Rice Hotel. During World War II, he moved his family to East Texas and started a wholesale candy business in Lovelady. All throughout elementary school and high school, Jack helped out in the family business. “I remember that we made a 45-pound batch of peanut brittle every 15 minutes, every day,” says Jack. “We made a million and a half pounds of candy per year.”

Jimmy King retired in the early 1960s, and Jack went to work as a mechanical contractor. “But sugar is in my blood,” says Jack, and in 1975, he opened a small shop in Crockett. And after a few years, Jack began to search for a bigger town in which to expand. That search brought him to Galveston, where the Galveston Historical Foundation was restoring some of the Victorian-era buildings on the Strand. Jack bought a building in the fall of 1976,
moved his family to Galveston, and made his first candy on the Strand in September of 1977.

Today, using restored, antique equipment, La King’s churns out homemade fudge, pecan pralines, peanut brittle, saltwater taffy, and a variety of other
house-made sweets. “The saltwater taffy is our biggest seller,” says Jack. Of the 22 flavors of taffy that La King’s pulls-often before an awe-struck
crowd-banana is the biggest seller.

For the full La King’s experience, make sure to visit the soda fountain. “We mix the sodas by hand; we make them the way they were supposed to be dispensed,” says Jack. “We start with the syrup, add ice then add the carbonated water. !fit’s your first time here, I recommend you get an ice-cream soda; we start with the base syrup and make the drink, then we add a little bit of ice cream. And then we add two scoops of ice cream.”

So the next time you’re hankering for an old-fashioned Coke float or a piece of melt-in-your-mouth saltwater taffy, pull up a chair at La King’s. It’s sure to
leave a lasting impression and a smile on your face.