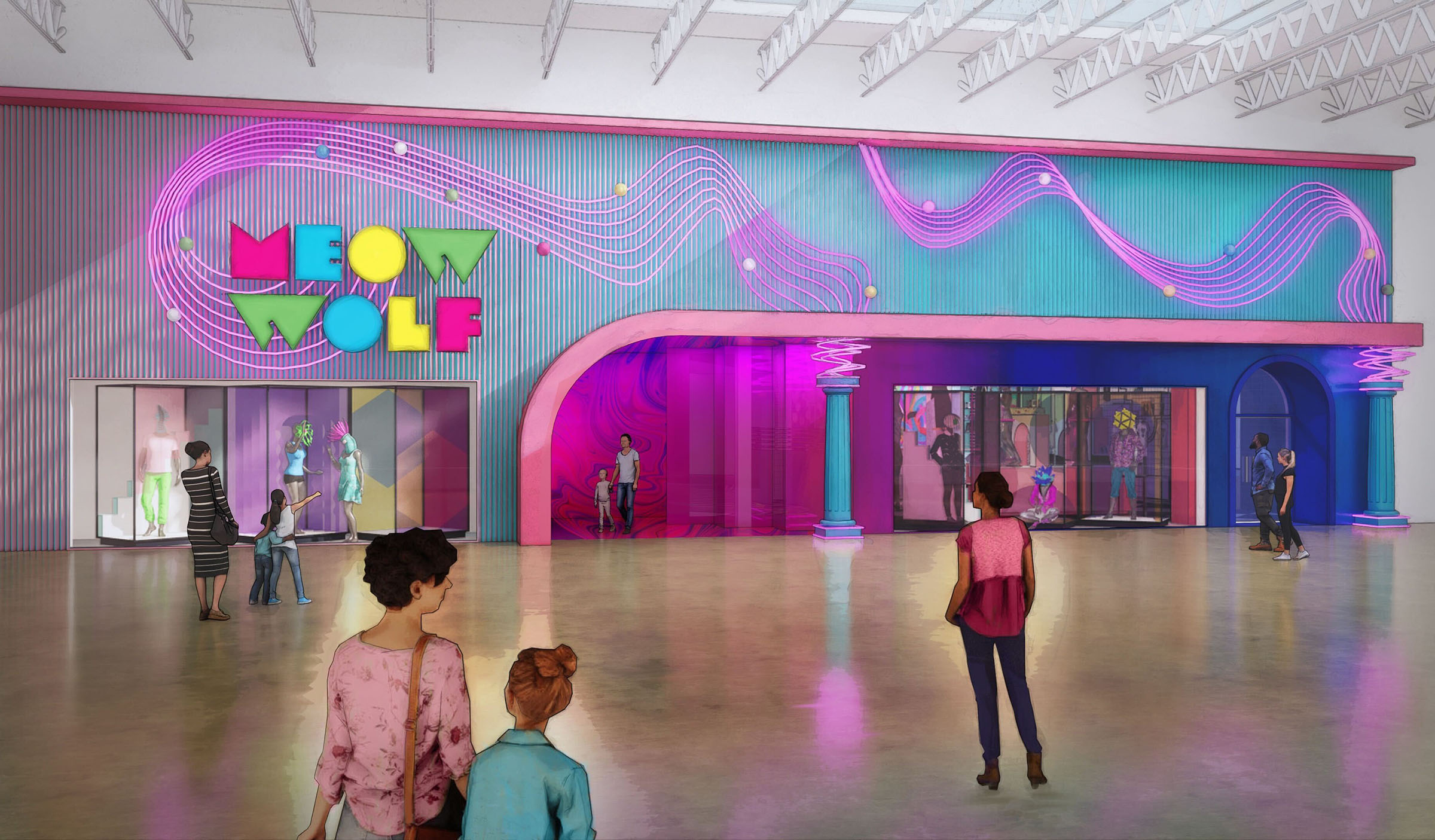 On our visit to Meow Wolf in Santa Fe back in 2018, my wife and I came out with slightly different opinions. She enjoyed the crawl spaces, but a couple of the humans who were employed to interact with visitors struck her as boorish Disney wannabes. I, on the other hand, had a perfectly swell time in this most-cerebral, beyond-clever theme park.

Starting next year, Texans won’t have to drive to Santa Fe for a full-tilt hit of Meow Wolf. The arts and entertainment company known for creating psychedelic interactive adventure experiences—not unlike being inside a very surreal video game—announced it was coming to Grapevine and Houston with the group’s fourth and fifth permanent exhibitions. The Texas expansion follows openings in Las Vegas and Denver last year. Grapevine Mills Meow Wolf opens in 2023, while Houstonians will have to wait until 2024 for Meow Wolf’s debut in H-Town’s historic Fifth Ward.

“Texas is one of largest and most diverse states in the country with a vibrant artistic scene,” says Meow Wolf CEO Jose Tolosa, when asked why Meow Wolf chose Texas. “It’s also the state with the largest visitation to our existing Meow Wolf locations that doesn’t today hold a Meow Wolf location.”

Once open, residents and visitors in North and Southeast Texas will have “portals” to step into and explore, similar to Santa Fe’s The House of Eternal Return. There, visitors experience 70 rooms of trippy interactive art installations: open a refrigerator and step right into a luminous forest of Day-Glo tree branches; crawl into the fireplace and enter a whole ’nother world.

A core group of artists, designers, and builders collaborated to make the original Santa Fe location, and each new destination augments that core with local artists. For instance, more than one-third of the more than 300 artists who worked on Denver’s location hail from Colorado. This summer, Meow Wolf will start recruiting Texas creators and staff for the Grapevine and Houston projects. Interested folks are encouraged to follow @meow__wolf on Instagram and @MeowWolf on Twitter, and meowwolf.com/careers. Or, sign up at texasportals.com.

Beyond the cool factor of maximum visual stimulation in a bunch of fun houses writ large, and the requirement of some physical dexterity, the various environments are part of a mystery game that can be played with clues posted throughout—if you want to go that deep. The Vegas Meow Wolf’s theme is Omega Mart (“You have no idea what’s in store”). Denver is the Convergence Station, with a theme about quantum travel to a city with a futuristic economy based on trading and collecting memories.

As my wife will attest, the Santa Fe adventure is not flawless. But there is little argument that Meow Wolf pretty much redefines entertainment, promising a unique experience in exchange for $40. The concept is so shiny, tech-y, and futuristic, it begs the question: Why not Austin? After all, in 2018, the company’s documentary, Origin Story, premiered at South by Southwest, and this year’s festival included a Meow Wolf pop-up installation called Spatial Holodeck.

“There are many factors that go into choosing a location that include the size of the local community and the visitors to that location, but also our potential contributions to the culture and economic development of the area,” Tolosa says. “While Austin would have been a great location like many other cities across the U.S., it will be Grapevine’s and Houston’s time to shine, and we’re excited about being in both cities.”

According to an Austin official who asked to remain anonymous, the capital city didn’t have the kind of large warehouse space available to stage a Meow Wolf—like a bowling alley in Santa Fe, a supermarket in Vegas, or a mall in Grapevine. The city is full. Therefore, if you want to escape into another world, Grapevine and the Fifth Ward will have Texas’ weird portals for now.