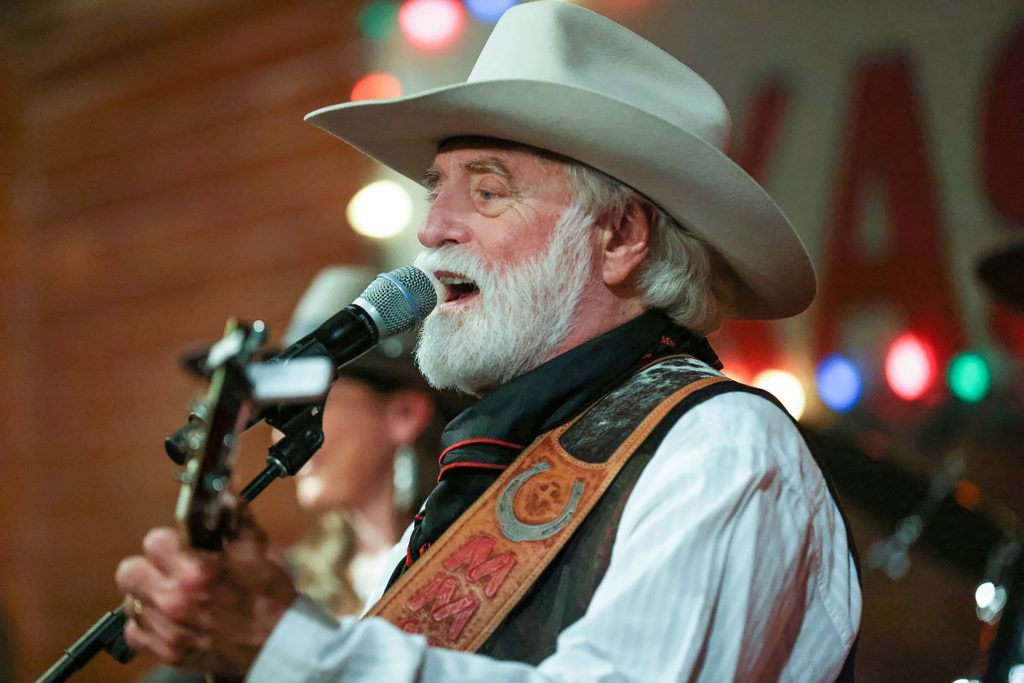 For 30 years, Michael Martin Murphey, 77, has been ringing in the holiday season with his Cowboy Christmas tour, which includes multiple stops throughout Texas and a few surrounding states. The award-winning singer-songwriter, who first made a name for himself in the 1970s with hits such as “Wildfire” and “Carolina in the Pines,” recently released a new album, Road Beyond the View, with son Ryan Murphey. Never failing to draw crowds in big cities, the Dallas native still makes a point of returning every year to the tiny town of Anson (population 2,347), just north of Abilene, to perform with his Rio Grande Band at the annual Texas Cowboys’ Christmas Ball.

TH: How did your Cowboy Christmas show get started?
MMM: In 1985 my mother gave me a book with Larry Chittenden’s poem “The Cowboys’ Christmas Ball,” which he wrote in 1890 about the Anson ball. I thought it was a great concept, so I recorded it as a song and started giving Christmas concerts beginning in 1986. When I put out my first Cowboy Songs album in 1990, that became the most successful album I had ever made. The record company wanted me to make another one, a Christmas album. So, I put out Cowboy Christmas in 1991, and it got a lot of airplay. The very next year, I got a phone call from the ball committee in Anson inviting me to play there. That’s when I realized that there were people who were keeping the traditions of the original ball alive, the great old Texas dances and music. I went on to play Anson every year. It inspired me to change the way I toured—to tell the story of the Cowboys’ Christmas Ball onstage.

TH: How has the Anson ball changed over the years?
MMM: The Cowboys’ Christmas Ball started in 1885, and a lot of the dances then were from the early Texas period, even going back to the Republic [of Texas]. When I first went to the Cowboys’ Christmas Ball in Anson, people were still dancing to songs like “Red River Valley,” “Goodbye Old Paint,” “Little Joe the Wrangler,” and “Streets of Laredo.” So, we play those songs, too, but we also add new music all the time. Even our new songs are based on traditional kinds of melodies. The vast majority of old cowboy songs come from Irish melodies, so that’s not too big of a stretch for a guy named Murphey.

TH: What’s the atmosphere of the ball like in Anson?
MMM: It takes place in Pioneer Hall, a rock building that was built in the 1930s during the Depression by government workers who needed a job. It has a great dance floor made of oak. Over the years, it’s been decorated with pictures of the old Cowboys’ Christmas Ball. It’s almost like dancing in a museum now. The ball draws people from all over the world. They dress up in Victorian costumes and dance old-time Texas dances like the schottische, the Paul Jones, the Virginia reel, and the Cotton Eye Joe.

TH: Why is it important to keep the Cowboy Christmas tradition going, year after year?
MMM: It’s part of Texas culture, and part of who I am. I’m going to play the music of my culture until I can’t do it anymore. It’s not just about pop music or coming up with another hit. I play songs that come from the heart, not the charts.