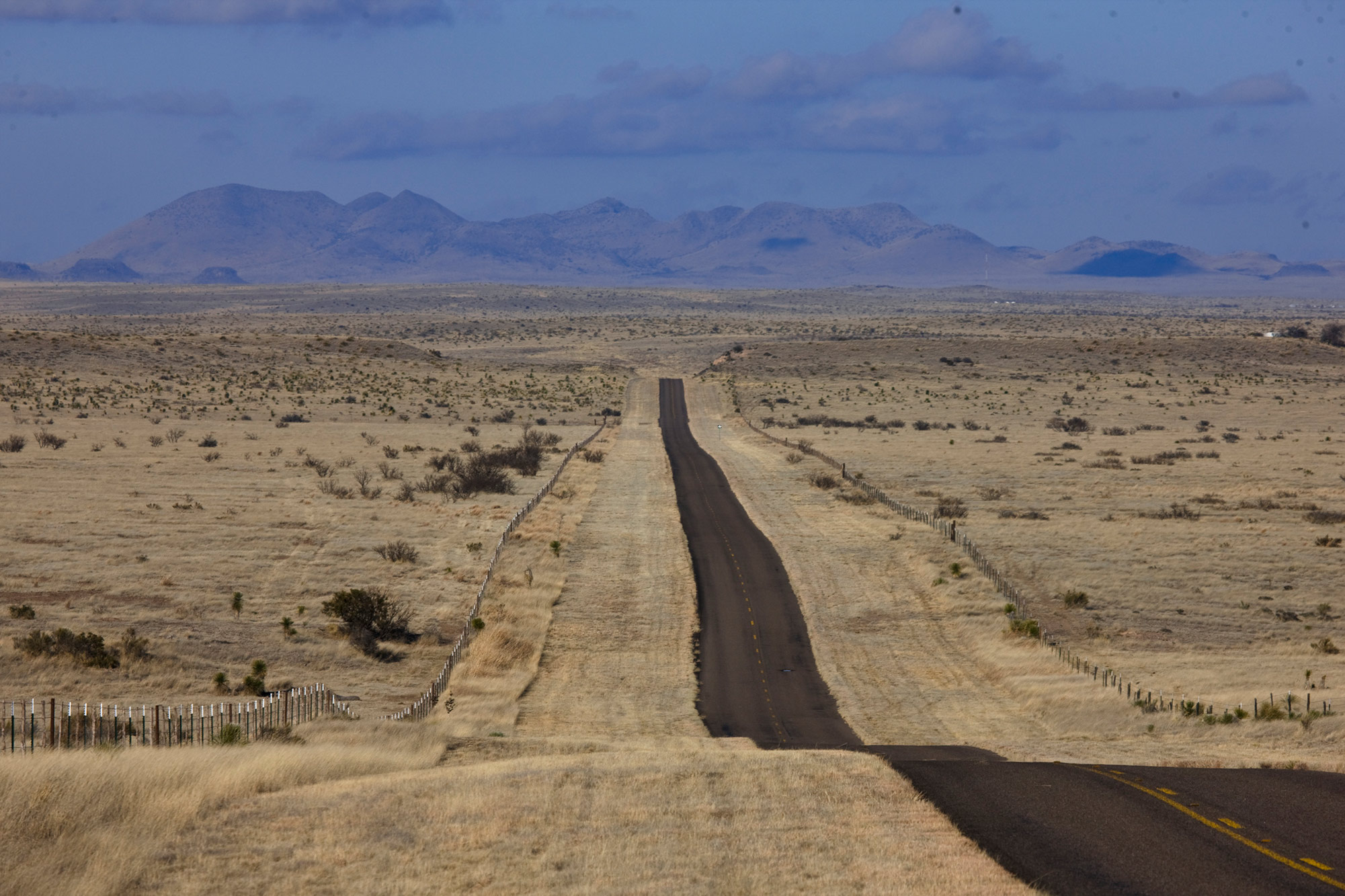 My husband, Paul, and I are travel journalists who follow a few rules while we are on the road. One of them is “Never say no to an experience.” If you say “No,” a door slams shut. If you say “Why not?” the door squeaks open.

We got to apply this rule last fall, driving 5 hours from our home in Santa Fe, New Mexico, to a Society of American Travel Writers convention in El Paso. We left early so we could spend some time exploring West Texas’ towns. In Marfa, while we were visiting art galleries, locals told us about the Marfa lights. They described the lights as glowing orbs of unknown origin that appear in the sky over the vast emptiness of West Texas, presenting themselves at random intervals but always in the uninhabited area southeast of the town.

Some speculate they are atmospheric reflections of headlights and bonfires, but that—along with every other theory—has never been confirmed. None of the people informing us of the lights had actually seen them, but they knew people who said they had. As one man put it, “If you believe in Santa Claus, you’ll probably believe in the Marfa lights.”

After the sun had set, armed with flashlights and a large dose of skepticism, we headed east on US 90 toward Alpine. As we drove along I said to Paul, “Look at the lights of those planes in the sky.” It seemed as if they were flying on top of each other at the same speed in the same direction. And then, suddenly, one of them shot out in front of the other and disappeared.

We kept driving until we saw several cars parked along the road about 9 miles east of town, so we parked there too. Then we turned on our flashlights and walked in the dark until we saw the Marfa Lights Viewing Area, where about 12 people were pointing toward something in the vast distance that stood out against the coal-black sky: blinking red lights, which appeared human-made. “They’re just aircraft warning beacons on a broadcast tower,” I reasoned to Paul. But all around them were distinct white lights, bouncing around like pingpong balls. 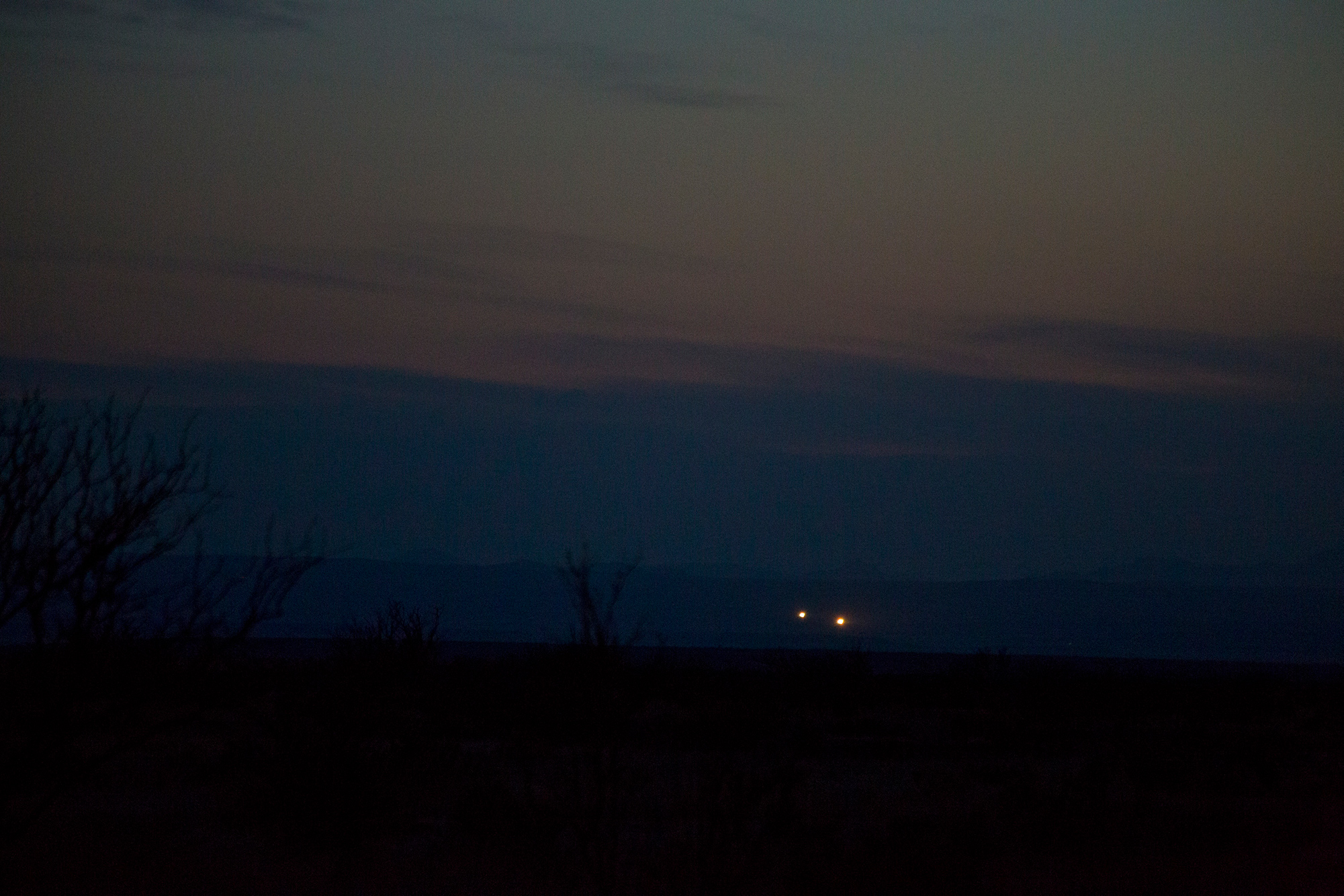 The Marfa lights can be seen in the distance against the dark backdrop of night. Photo by Will van Overbeek

“Do you see that?” the man on our right asked with obvious excitement. “I’ve been here many times, but I never saw them before.”

“Wow,” Paul exclaimed, and he is usually not the kind of guy who says “Wow.” The mysterious orbs danced across the sky, bouncing, shimmying, changing from white to yellow to red to white again, then disappearing and reappearing, defying all logic.

“Do you think we’re hallucinating?” I asked the couple on our left. “If you are,” the woman replied, “then we’re having a group hallucination.”

As we spoke, the other viewers came closer. Although it was too dark to clearly see each other’s faces, we felt connected, bonded by an extraordinary experience. We were all pointing, gazing in awe and wonder, exclaiming, “Do you see that one jumping around?” “Look to the left —there’s a crimson one.” “What do you think they are?” “Who knows? I’ve never seen anything like this!” “We are so lucky. My brother came here 10 times and he never saw any lights. We’re seeing dozens of them.”

I smiled when I realized that the men, especially, were as giddy and enthused as kids. I thought about the man who said believing in the Marfa lights was like believing in Santa Claus. This wasn’t about belief. I would raise my right hand and take an oath on a witness stand that we really did view the lights. We came. We saw: dozens of orbs, no longer resembling distant planes, but now distinct balls of light bouncing and weaving in and out of each others’ paths. And there were 12 other witnesses who shared the experience.

Paul and I stayed for more than an hour before saying goodbye to the others as though we were old friends. On the drive back to our hotel, we were not alone; the lights floated overhead, accompanying us on our journey back into the known.