The C. Baldwin hotel is named for Charlotte Baldwin Allen, the wife of a city founder who invested in her own right in the burgeoning town. 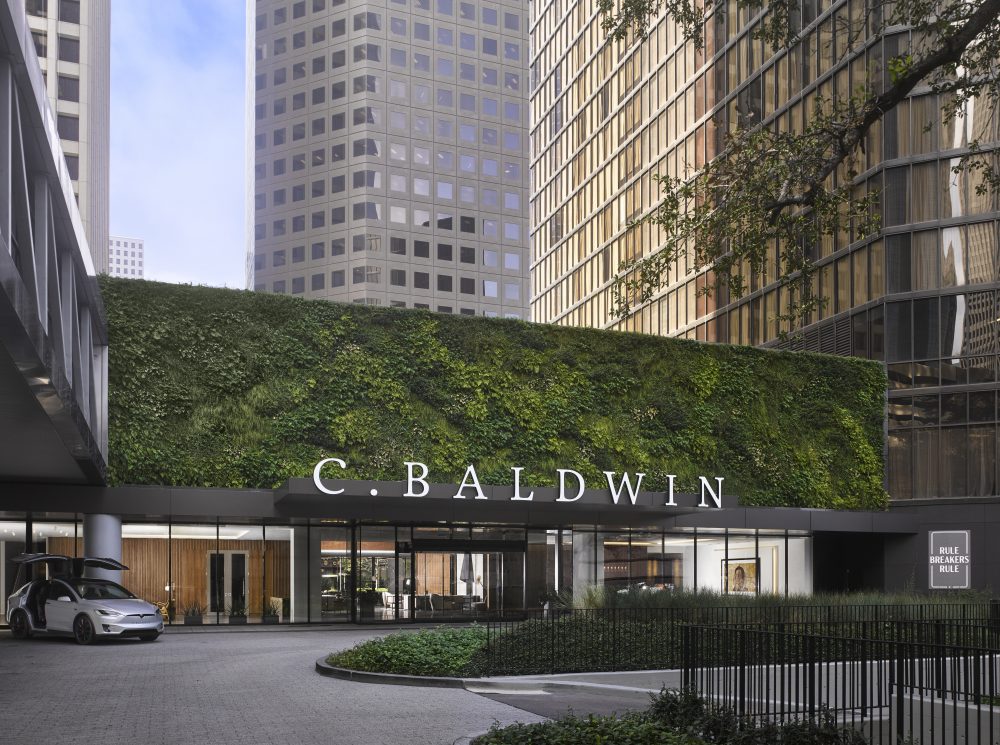 A prominent wall in the lobby of the new C. Baldwin hotel in downtown Houston is emblazoned with the catchphrase, “Well behaved women rarely make history.” That may be true, but some—like its namesake, Charlotte Baldwin Allen—certainly left their mark.

As the wife of Augustus Chapman Allen, who founded the city in 1836 with his brother John Kirby Allen, Charlotte used her East Coast inheritance to finance the development of future downtown property along Buffalo Bayou. Nevertheless, few have remembered her until now, thanks to the new hotel, the latest edition in the Curio Collection by Hilton. 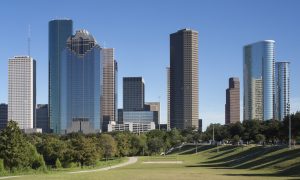 Located steps from the history-filled Sam Houston Park, the C. Baldwin celebrates Houston’s history while exuding 21st-century sensibilities with its interior design, retro-modern furnishings, and artistic touches. Formerly the DoubleTree, the reinvented space welcomes guests with a broad lobby opening onto a sunken circular bar ringed by banquettes, plus a coffee bar and an open-air patio. A well-equipped gym, spa, and boutique offer diverting ways to pass the time.

Overall, the décor is a blend of the past and the present: vintage books, a midcentury television, and a record player add funky touches to the common spaces. The 354 rooms are stylishly appointed in a warm, neutral palette with gold accents and organic details, such as leather drawer pulls and horsehair tassels. All rooms feature floor-to-ceiling windows, and some look out onto the surrounding forest of skyscrapers.

The on-site restaurant, Rosalie Italian Soul, is also named for a woman: the great-grandmother of chef Chris Cosentino, the 2012 winner of the TV show Top Chef Masters. His culinary heritage is reflected in Rosalie’s menu, which ranges from breakfast polenta in the morning (served either savory or sweet) to snacks like arancini (crispy risotto balls) to entrees such as pizza, fresh pasta, and eggplant parmesan. After-dinner indulgences might include panna cotta seasoned with bay leaf or a glass of the house-made limoncello.

The C. Baldwin’s downtown Houston location is surrounded by dining and entertainment options, and the hotel offers guests complimentary lifts in a Tesla to nearby sites, such as the theater district. Some attractions, like the trails that wind along Buffalo Bayou, are within easy walking distance.

Sam Houston Park, catty-corner to the hotel’s entrance, exhibits nine historic homes that illustrate the evolution of the city throughout the 1800s. The earliest example, a rough-hewn log cabin from 1823, reveals the kinds of dwellings that the Allens would have encountered upon their arrival. Charlotte’s early financial support enabled the young city to grow and thrive, ultimately becoming the fourth largest metropolis in the country.

One can only imagine what she would think of the towering skyscrapers that populate downtown today, or of the C. Baldwin hotel itself. Perhaps she would have suggested a different name. According to legend, Sam Houston had recommended calling the town Charlottesville in her honor, but she demurred and insisted on using his name instead. So Houston it became, and the rest is history.