No Skimp on the Shrimp

South Padre Island's Shrimp Haus serves them up every which way 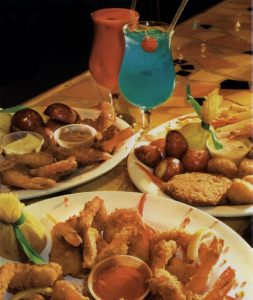 Dig into some of the”101 Ways to Eat Shrimp” at Shrimp Haus, on South Padre Island. Photo by Kevin Stillman

How do I love fresh, Gulf of Mexico shrimp? Let me count the ways. I love them boiled, sauteed, blackened, grilled, and fried. I love them crusted in coconut or pecans. And I love them wrapped around pepper jack cheese, simmered in peanut butter sauce, and pressed into quesadillas.

Any restaurant that does all this can only be called Shrimp Haus. And the fact is, Shrimp Haus, the appealing seafood restaurant at South Padre Island’s  Schlitterbahn waterpark, does all that and more.

Now in its eighth year, Shrimp Haus has 31 shrimp dishes on the menu—26 en trees and five appetizers—and also offers shrimp sandwiches and buffalo shrimp (large, butterflied and fried shrimp served with 50 different sauces). “Those [sauces] range from very mild to they’ll-take-the-skin-off-your-tongue,” says Shrimp Haus food and beverage director David Clark. With this lineup, the restaurant easily lives up to its “101 Ways to Eat Shrimp” motto.

It’s tough to decide what kind of shrimp to have, so it’s probably good that the eatery is a short walk from the Schlitterbahn parking lot. You can mull the options as you trek across a long, covered wooden footbridge over beach, native wetlands, and a small pond. Finally, you reach the stairs or elevator (your choice) that will take you to the restaurant, on the second floor of a massive structure overlooking the waterpark and the Gulf of Mexico.

Schlitterbahn hosts visitors full-time from late May through early September, but the restaurant serves food year round. In summer, when the park is open, you can eat on the covered outdoor patio or side veranda, which together seat 300 people, and watch park revelers getting doused by buckets of water, shooting out of coiled tubes, or surfing one of the country’s largest man-made wave machines. After dark and in the off-season, most people sit indoors unless there’s a special outdoor concert or another event. With the park so quiet, the ambiance is that of a tranquil resort getaway.

One fall afternoon, my friend Gene and I emerge from the elevator to an empty patio with windows overlooking expanses of sand dunes and the Gulf’s gently lapping waves. But once we walk through the wooden doors to the restaurant, we are in cacophonous shrimpland, our noses happily recognizing
the aromas of shrimp, garlic, and butter. Servers pour from the first-floor kitchen like ants from an anthill, carrying giant trays of plates brimming with shrimp.

This inside room seats 120 people. With its wooden rafters, concrete floor, and metal roof, it has the feel of a camp dining hall, but with televisions. There are two big TVs in each corner of the room and a line of four over the bar, typically tuned to sports. The room also contains several aquariums with a variety of fish, some indigenous to the Laguna Madre. An oblong aquarium suspended over the bar was fashioned from a glass-bottomed canoe that once allowed visitors to see the bottom of the bay.

If you’re at Shrimp Haus on a weeknight, you’ll eat your shrimp to the music of long-time local favorites Chuck Comeaux and Leslie Blasing. Leslie, who can wail “My Heart Will Go On” like Celine Dion one minute and growl Steppenwolf’s “Born to be Wild” the next, does most of the singing. Chuck plays bass guitar and MIDI sequencer. When he steps up to the microphone, it’s usually to offer a Sinatra tune (“Summer Wind” is an audience favorite) in his velvety baritone.

Meanwhile, diners—usually a mix of locals and tourists-—applaud between bites of shrimp. Clark says coconut- and pecan-crusted shrimp are two bestsellers. Both are crunchy and sweet on the outside (coated in either coconut and roasted almonds or finely ground pecans and brown sugar) and perfectly cooked on the inside. The coconut shrimp come with a flavorful orange-brandy sauce. Their pecan cousins pair with a sesame-flavored, sweet-hot sauce. New potatoes and a vegetable medley accompany most entrees, but the shrimp star in the show.

Simpler shrimp dishes fare equally well. The chefs season the blackened shrimp perfectly, preserving the briny taste that makes Gulf shrimp so delicious. Shrimp sauteed in tequila and lime suggest a hint of a margarita And shrimp in a mild cream sauce with basil partner delightfully with linguini.

Shrimp Haus actually started with 70 different shrimp entrees, but Clark says, “Some of them just weren’t very popular.” For example, a pumpkin seed-crusted shrimp served with sweet-and-sour sauce never drew the fans he expected. So, he pared the list to the current varieties, plus some sandwiches and the buffalo shrimp with the 50 sauces—which he’ll also serve with fried chicken wings, in case you don’t like shrimp. “We’re always coming up with
new flavor combinations,” says Clark.

And, of course, there are burgers for the kids. But since even small fry like these jewels of the Gulf, the children’s menu also includes fried shrimp. It’s
good to get the kids’ taste buds honed early. Someday they’ll have to make a lot of adult decisions—like which way to have their shrimp at Shrimp Haus.