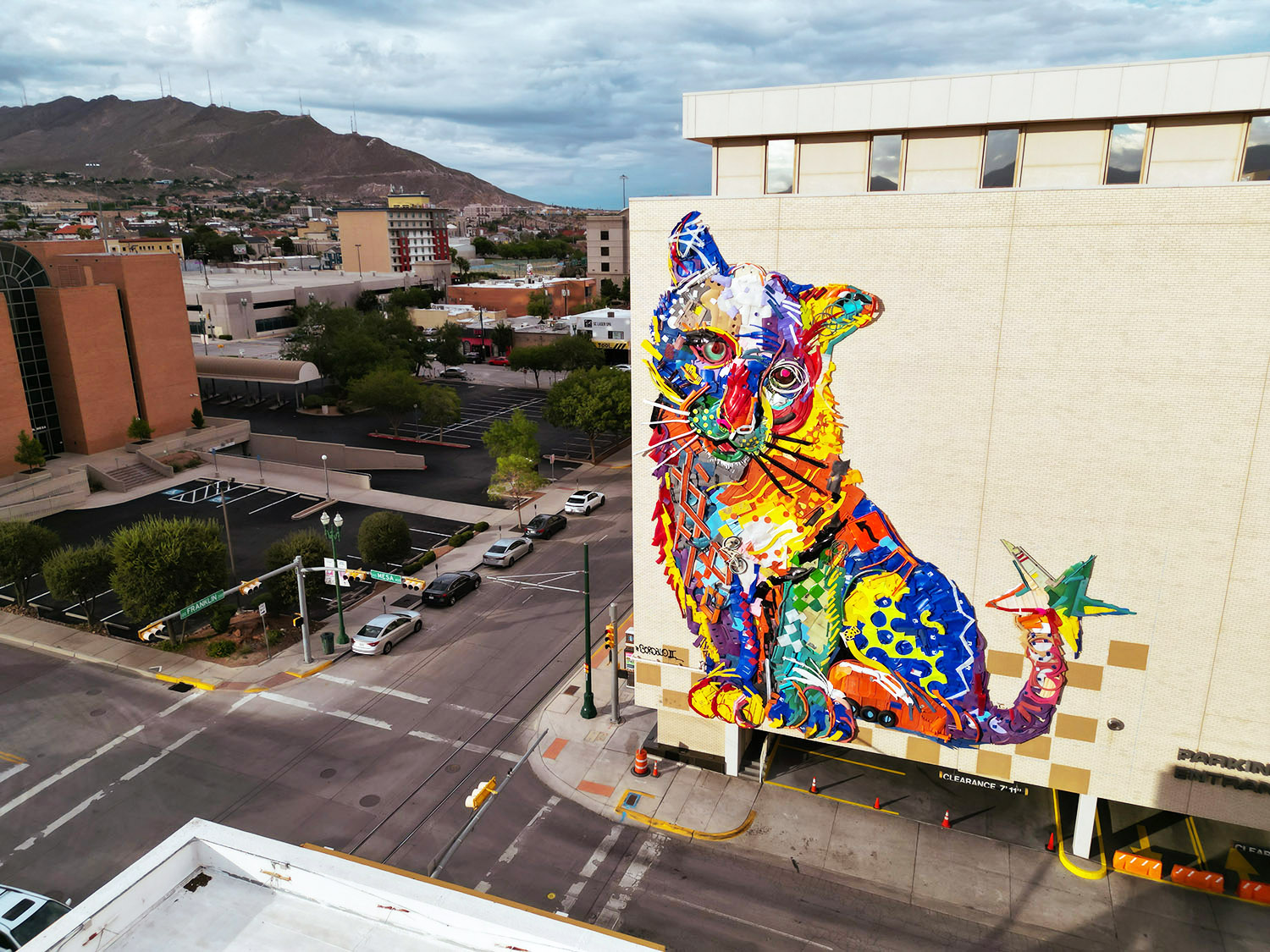 Instead of waiting for politicians to take action, members of a high school art club in El Paso decided it was up to them to act.

Led by their teacher Candace Printz, the art club students at El Dorado High School channeled their frustration about today’s lack of effective climate policy into creating a nonprofit that, with the help of Portuguese artist Bordalo II, recently erected a 64-foot mountain lion mural in downtown El Paso. Made from 100% recycled trash collected by the community, the mural is a striking emblem colorfully decorated on the west wall of the One San Jacinto Plaza building along the city’s historic streetcar route.

The mural is the latest installment in Bordalo’s “Big Trash Animals” series and pays tribute to an at-risk species deeply rooted in West Texas’ natural identity. There are close to 200 “Big Trash Animals” across the world, spanning from a llama in Chile to a red squirrel in Ireland, and fewer than 15 pieces by Bordalo in the United States. This is the artist’s first installation in Texas and largest all-plastic piece he’s done in the world. 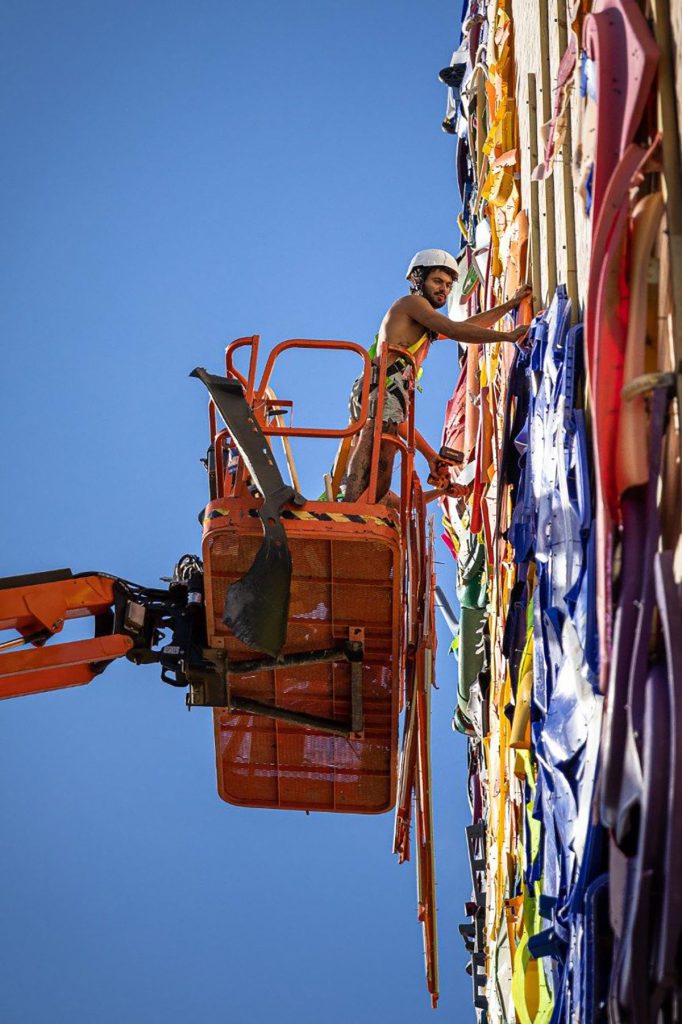 Despite only taking six days in August to construct, the project’s completion was years in the making. In 2016, Printz’s art club received national recognition from Barnes & Noble after winning the retail bookstore’s “Get Going Day with Chelsea Clinton” for the group’s community service project aimed at transforming trash into student-made art. Shortly after, a number of its members sent emails to Bordalo hoping to bring the 35-year-old artist to the borderland, who, to their surprise, obliged.

“It was a bunch of art club kids after school eating pizza just kind of complaining about pollution,” Printz says. “The only difference between them and other kids is that we acted on our idea. We didn’t sit on it and say, ‘Hey, wouldn’t it be cool if someone else did it?’ Instead, we said, ‘Why don’t we do it?’”

The Green Hope Project was born in 2019 with the same art club students, who by then had graduated, serving on its board. The mural was initially slated to cost approximately $60,000. But due to delays and shortages caused by the coronavirus, the price of lumber used for the mural’s base quadrupled, and along with an uptick in Bordalo’s artist fee, the cost ballooned to around $140,000. No taxpayer funds were used. Rather, the group raised money through fundraising efforts, applying for grants, seeking in-kind donations, and partnerships with local organizations and businesses that have helped cover about 70% of the cost so far. Upon completion, all scrap lumber was donated to local high school theater departments to use in building sets.

In all its beauty, the mural may seem like an optimistic spin on an alarming global issue. Though, ironically, the waste created by the plastic materials used in the design has contributed to the rapid decline of mountain lions.

“Unfortunately, plastic pollution affects mountain lions and other animals both directly and indirectly,” says Printz, who is now president of the Green Hope Project. “It harms their habitats and can be potentially life-threatening when consumed or if entangled in. …[Bordalo] is depicting the victims with the actual materials that are killing them, so the animal choice was very intentional.”

According to Printz, the Green Hope Project reached out to Texas Parks and Wildlife and local biologists to get a shortlist of animals “that needed attention to ensure this wasn’t a wasted opportunity,” she says. Prior to his arrival, Bordalo provided a “shopping list” of materials needed based on durability and color. The Green Hope Project fulfilled about 95% of the list through the El Paso Environmental Services Department, with the remaining items attained by donations. Everything collected was otherwise destined for the landfill or recycling plant—nothing is new.

The majority of the pieces were originally three-dimensional figures such as port-a-potties and trash bins that required being reshaped into flat surfaces. “I don’t know how he does it, but he took all the shapes and colors he wanted and just screwed them together,” Printz says. “It was genius. It was like making giant puzzle pieces.”

Crew members then carried each piece up by boom lift and carefully screwed them onto the wall’s outline with Bordalo overseeing the process across the street and providing instructions via walkie-talkie. The final product displays a playfully posed mountain lion that provides sharp social commentary on the world’s issue with overconsumption and waste. A closer look reveals a medley of defunct objects most would have dismissed as being suitable for art, including tires, a bicycle, and jungle gym equipment.

The Green Hope Project will maintain the mural for at least three years and then it will then be gifted to the building’s owner. Lighting for nighttime viewing and plaques dedicated to Bordalo and the project’s mission are set to be installed soon to help ensure that its powerful message isn’t lost underneath its vivid colors and grandeur.

“We have to have this balance in the world, like yin and yang,” Printz says. “We have this bad stuff, but we need people on the other side saying this isn’t OK. Or else, what does the end look like? It’s not good. I’m super happy with the mural because I think that there is power in art to move people.”