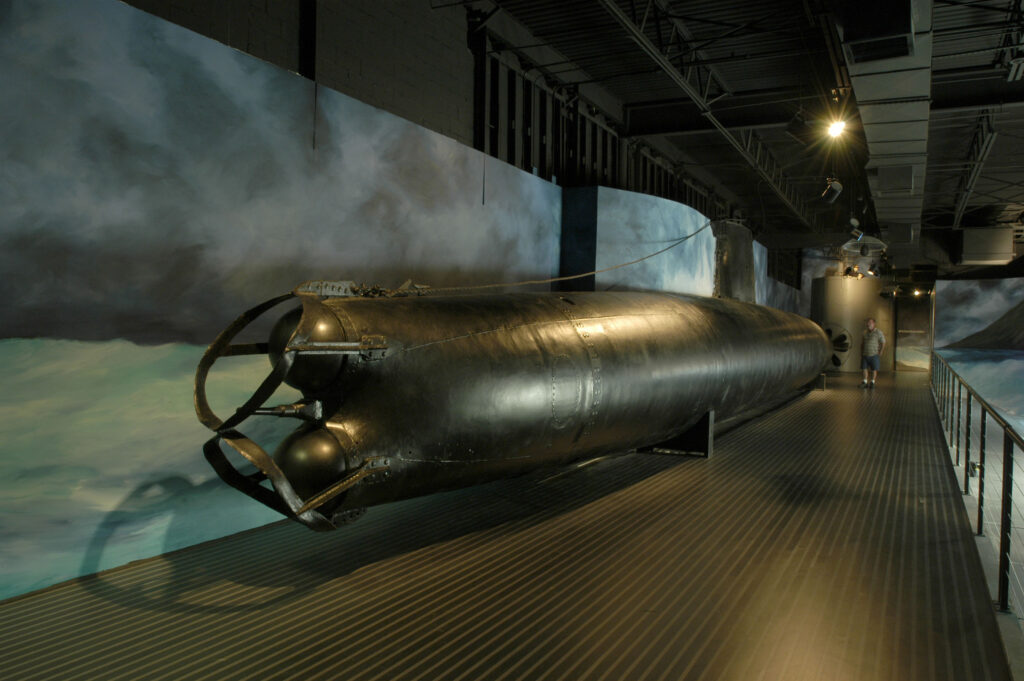 The 78-foot midget submarine at the National Museum of the Pacific War in Fredericksburg. Photo by J. Griffis Smith

Inside the Pearl Harbor Exhibit at the National Museum of the Pacific War in Fredericksburg, the sound of a submarine pings in the darkness. The atmospheric exhibition space is full of informative videos and remarkable artifacts. Among them is a door salvaged from the sunken USS Arizona and the centerpiece of the exhibit: the actual 78-foot midget submarine that was used by the Japanese during the attack before it ran aground and was captured. Looking on in quiet reverence at these relics resurrected from the ocean floor, I feel my hair stand on skin as I imagine the horror of that day “which will live in infamy.”

This year, Dec. 7 marks the 80th anniversary of the attack on Pearl Harbor. Apart from the Pearl Harbor Exhibit, which is on permanent display in the museum’s George H.W. Bush Gallery, another tribute awaits in the Memorial Courtyard. Every year, volunteers from the Fredericksburg High School ROTC program stake 2,403 American flags into the courtyard’s lawn, commemorating each of the lives lost on that fateful day. The sea of red, white, and blue is a stirring sight, and one that visitors can experience until Dec. 10.

Neighboring this solemn space is the Pearl Harbor Wall, which was dedicated in 2016 for the 75th anniversary. “It was such an important event in American history, and we thought it was important to pay very specific tribute to Pearl Harbor,” says Karen Stevenson, who was named museum director in July. Today, the 19th century limestone wall is mounted with dark plaques dedicated to the memory of all those who served at that critical time in the nation’s history, from survivors to the fallen.

Preserving their legacy of valor for future generations is a core component of the museum’s mission. In addition to in-person field trips at the museum and educational opportunities throughout Texas, the institution boasts a strong digital outreach program, harnessing the power of technology to share Pacific War history with young people everywhere. In fact, the team of educators and coordinators on staff have beamed into classrooms all across America and as far away as Ghana, bringing the stories of the Pacific War to students around the world.

“War is such a complicated issue for kids,” Stevenson explains. “It is so much more than the video games they have access to.” Making the history accessible and inspiring imaginations is part of the challenge. “What we are really trying to do is help children understand what it was like and find the commonalities,” she says.

On Dec. 7, the museum will air a multifaceted virtual program on its website at 11:55 a.m., the exact time the attack began 80 years ago. The 20-minute video will encompass everything from veteran’s memories to a recent interview with a Pearl Harbor survivor, and the reflections of General Michael Hagee, CEO of the Admiral Nimitz Foundation. Viewers can watch the program live or anytime thereafter at this link.