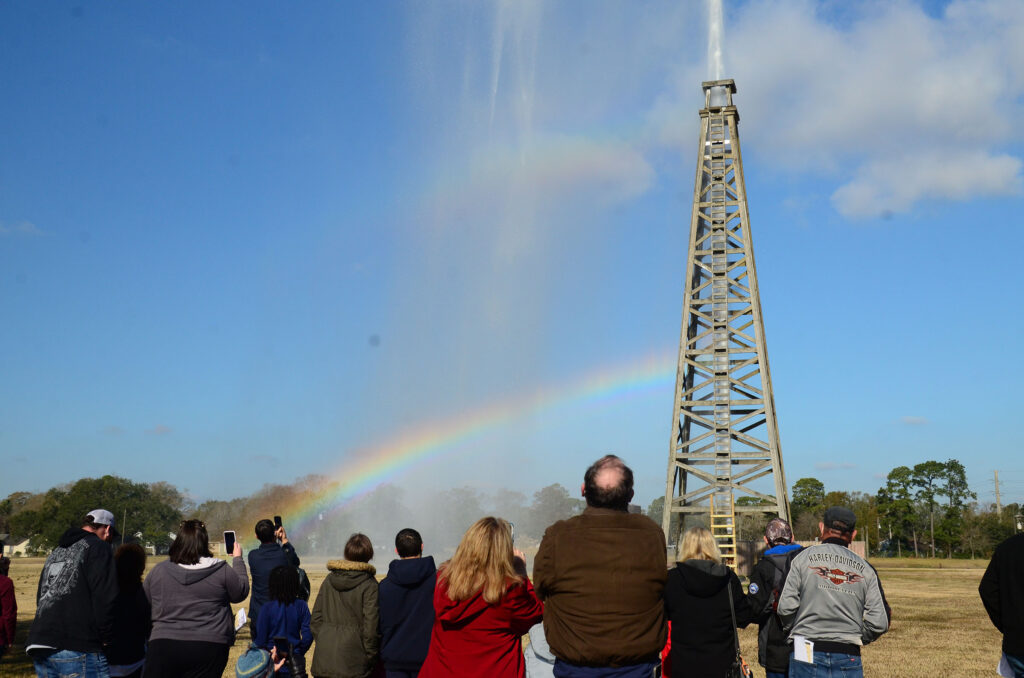 Imagine driving down State Highway 69 through south Beaumont and seeing a vintage oil derrick. Suddenly, a geyser of water spews from the top, shooting a full 100 feet in the air. Keeping your eyes on the road as best as possible, you notice the gusher continues for as long as it takes for the derrick to pass from view in your rear-view mirror.

You may ask yourself, “What the heck was that?” Well, you’ve just witnessed the 1901 Lucas Gusher, courtesy of Spindletop-Gladys City Boomtown historical park’s replica of the derrick that launched an industry.

Director Troy Gray, who gets to press the button on occasion to set off the gusher at the Lamar University-affiliated museum, says it’s been known to bring some cars to a halt on the highway, its occupants scrambling out to take pictures.

“We are like ‘Oh no! Don’t do that!’” he says. “And other people will exit immediately, but usually by the time they make the U-turn and get here, it’s done, or almost done. We only let it go for two minutes, not the nine days of the original.”

There are at least two things about Spindletop that are hard to wrap our minds around today. One is the magnitude of the event itself. After weeks of fruitless drilling and on the verge of giving up, roughnecks working for Austrian-born oil explorer Al Lucas were astonished to suddenly see all the pipe they had assiduously drilled over many long and hard hours came rising back up out of the ground. It was something they’d never seen before. The roughnecks scattered to a safe distance and watched in awe as hundreds of feet of drill pipe pushed up through the derrick, stripping its insides clean, rising up above the structure, and then falling apart in three- and four-length sections like snapped dry spaghetti noodles. And then it all rumbled to a halt.

That lasted just a minute. Emboldened by the temporary quiet, the roughnecks began picking through the mud and devastation when suddenly a chunk of mud came hurtling out of the hole in the ground as if fired by a cannon, sending the workers scattering once more. Eventually they worked up the courage to peer back down into the hole, and that’s when they first saw it: oil from deep within the earth, working its way towards the sky. It looked as if it were breathing, rising and falling with the varying gas pressure beneath, but moving inexorably toward the surface, where it erupted into a greenish-black geyser that ultimately rose to 160 feet, twice as high as the derrick itself. The event took place just 4 miles from Beaumont, where churches filled with the Christian faithful fearing the End of Days had arrived.

And it did, in a way. The end of an old way of life. Though there had been a few successful oil strikes in Texas before Spindletop, this was the big one, the one that helped end the horse-and-buggy days, changed Texas forever, and makes that fateful day, Jan. 10, 1901, perhaps the most important date in state history aside from San Jacinto Day.

Prior to Jan. 10, 1901, Texas was much like the rest of the states of the Old South with a cotton-based economy, albeit one with ranching and Mexican twists. But by the end of that day, and the weeks that followed, the foundation of the Texas economy for the next 120 years and counting had been laid. Oil companies that either got started or saw their futures assured at Spindletop included Humble Oil, Magnolia Petroleum, Sunoco, Texaco, and Gulf. In cases like Magnolia and Humble, they would be acquired and renamed and eventually become components of ExxonMobil.

“The discovery of the Spindletop oil field had an almost incalculable effect on world history, as well as Texas history,” summarizes the New Handbook of Texas. “Eager to find similar deposits, investors spent billions of dollars throughout the Lone Star State in search of oil and natural gas. The cheap fuel they found helped to revolutionize American transportation and industry.”

Adds Gray, “Up until then there had been debate on whether cars would be gas or electric. This settled that for the next century, and then you think about how it came to fuel ships and trains. It helped push America into becoming a modern society.”

Surrounding the derrick is the Gladys City historical park, which takes its name from the boomtown that erupted around the gusher’s ground zero, an area then outside of Beaumont proper.

Overall, the area’s population went from about 9,000 to 50,000 almost overnight, and retail, real estate, and civil services simply could not keep up. Food and drinking water were in short supply and very expensive. Habitations ranged from blankets on the ground to crude huts. Sanitary services were barely above open sewers. Gray says there was a murder every night in the violent roughneck camps.

As would be the case in every boomtown, the hordes of honest workers looking for jobs and starry-eyed dreamers hoping to get a piece of the action were followed in quick succession by an almost equal number of card sharps, con artists of various stripes, thieves, bootleggers, narcotics peddlers, and prostitutes. Nobody had it worse than the ladies of the evening, Gray believes. “Their lives were so hard,” he says, citing several examples of those who ended their lives by a horrifically painful method—drinking acid—rather than endure one more day of life in Gladys City.

But for history’s sake, the gusher remains the main attraction. This Saturday, Spindletop-Gladys City Boomtown Museum is celebrating the 121st anniversary with scheduled eruptions of Texas’ Old Faithful. Rest assured, Gray says, she will come in around 10:30 a.m., the same time it did 111 years ago, and a few additional times depending on turnout. The anniversary gusher will feature a reenactment, with actors portraying the roughneck crew going through the frantic motions of that most fateful of days. If it’s a chilly day and you find yourself getting wet, be thankful its only water and it’ll all be over in a few seconds and not nine days from then.