No one is quite sure how the knot got there, but people swear they can see the Virgin Mary in this oak tree 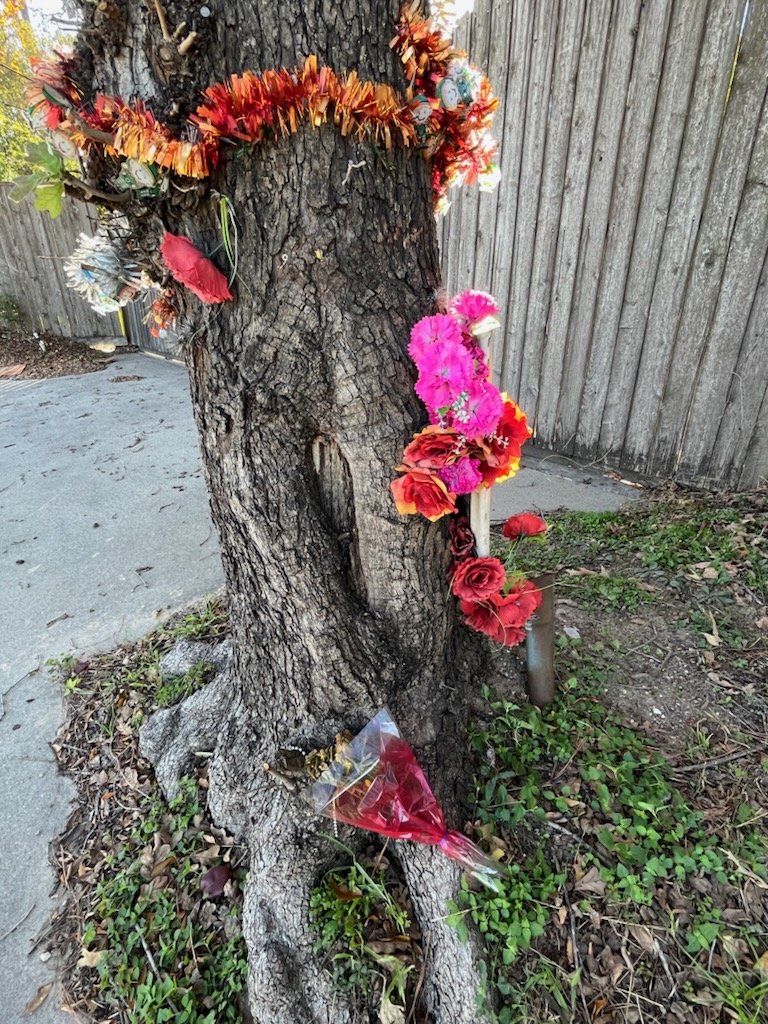 Silk flowers, images of Our Lady of Guadalupe, and other items adorn the Virgin Mary knot in the oak tree located on North Shepherd Drive in Houston’s Garden Oaks neighborhood. Photo by Layne Van Vranken.

Every so often you’ll hear about an apparition or religious imagery taking form in the oddest of everyday objects. There was once a Preston Hollow couple who debated auctioning off a praying Jesus Cheeto they discovered in a 99-cent bag of chips purchased from a gas station. In Houston, an altar was once created for a cafeteria pizza pan that displayed a grease-laden image of the Virgin Mary, which was discovered on Ash Wednesday of all days. A New Mexico woman once found the face of Jesus in a homemade tortilla while preparing a breakfast burrito for her husband, later encasing the holy tortilla in a shadow box held up by cotton balls for admirers to observe.

The appearance of holy images, while sometimes comical and lighthearted in the objects they take shape, is not always taken lightly—at least not in the Catholic Church. There are scores of documented, heavily researched, and approved apparitions within the faith, many of which have become cultural icons around the world, such as Our Lady of Guadalupe. And while the Jesus Cheeto and the pizza pan Mary are certainly not the caliber of Our Lady of Guadalupe, that hasn’t stopped individuals from seeking out and discovering holy images in commonplace objects, such as an oak tree.

In Garden Oaks—a growing neighborhood about 15 minutes northwest of downtown Houston full of old and new construction—you might pass by what appears to be an ordinary tree near a sidewalk on North Shepherd Drive just like the ones that follow and precede it. But this sturdy tree adorned with silk flowers became quite the phenomenon a decade ago when multiple outlets began reporting on what appeared to be an image of the Virgin Mary ingrained in the tree. Oddly enough, it wasn’t the only holy tree discovered in the city, with another local tree—this one is Southeast Houston—also bearing a supposed image of the Virgin Mary.

The Garden Oaks homeowner, Kyle Toland, whose property is fenced in next to the mysterious tree, told outlets at the time that he was originally confused why visitors were leaving flowers and candles at the tree’s base. He was worried  that a fatal accident may have happened at the site, but came to discover that visitors weren’t mourning. Instead, they were paying homage and praying before a tree they believed bore the image of the mother of Jesus. Though Toland wasn’t sure how the outlined image of the tree came to be, he told the media that he believed a vehicle may have hit the trunk, causing the unique indentation to appear.

As time has marched on, so has the tree’s inevitable wear, tear, and transformation. A visit to this Garden Oaks tree had me pondering if I, too, would see what others once saw and some even still see today.  A personal study of this semi-famous Texas tree indeed had me questioning if I was missing something or not looking hard enough; for while I could certainly see a much-faded outline, I did not behold what those a decade ago once saw and kneeled in prayer before.

But this tree’s faded imagery and changing form hasn’t stopped Houstonians from still paying respect to it. Indeed, on my visit, I noticed a nailed image of Our Lady of Guadalupe to the tree itself, along with numerous silk flowers, including fuchsia carnations and deep red roses. The space around the tree was kept quite immaculate, too—especially for Houston streets—as if visitors and admirers make sure to take care of the rooted home of the so-called Virgin Mary Tree.

Houstonian Thomas Russell, 29, visited the Virgin Mary Tree after hearing about it from a Catholic friend, but said he didn’t witness an obvious, overwhelming image of the Virgin Mary after studying the markings on the old tree. Russell, a practicing Catholic, is a believer in the power of the supernatural and says that while he doesn’t see the same holy image others do, he understands why people find comfort and hope in the tree.

“I couldn’t see the image in the tree, but I could tell where it would have been considered to have been before,” he says. “I believe everyone’s looking for some sort of reassurance of the supernatural, and they want confirmation that our Lord and our Lady are watching [over] them. People want to see them in their day-to-day lives and are looking for the extraordinary rather than the ordinary.”

Rev. Peter Damian Harris, pastor at Holy Rosary Church in Houston, of which I am also a parishioner, says that while the Virgin Mary tree in Garden Oaks isn’t a recognized Marian apparition in the Catholic Church, he doesn’t want to “take away” what others believe they see in the tree, but thinks what they are really seeing is a reflection of “their devotion” to the Blessed Virgin Mary.

“The fascination, the love of our Blessed Mother and what she has done throughout history, that awareness has become so rampant that when you see an image, people associate it with her, and that’s not a bad thing, but we have to be careful that we aren’t creating a cult,” Harris says. “Anything that it appears to be, that’s what it is to them, but why couldn’t it be Our Lady of Lourdes? Why couldn’t it be Our Lady of Fatima? But they see that [image] because of the carving, and to [their] mind it is the Blessed Virgin Mary.”

While this tree’s fame has certainly died down over the past decade, there are those who still come to witness and venerate it in person. Just what will they observe when they stop by to study this neighborhood attraction—an image of the Virgin Mary or lasting damage from a car crash years ago? Well, maybe seeing is believing.