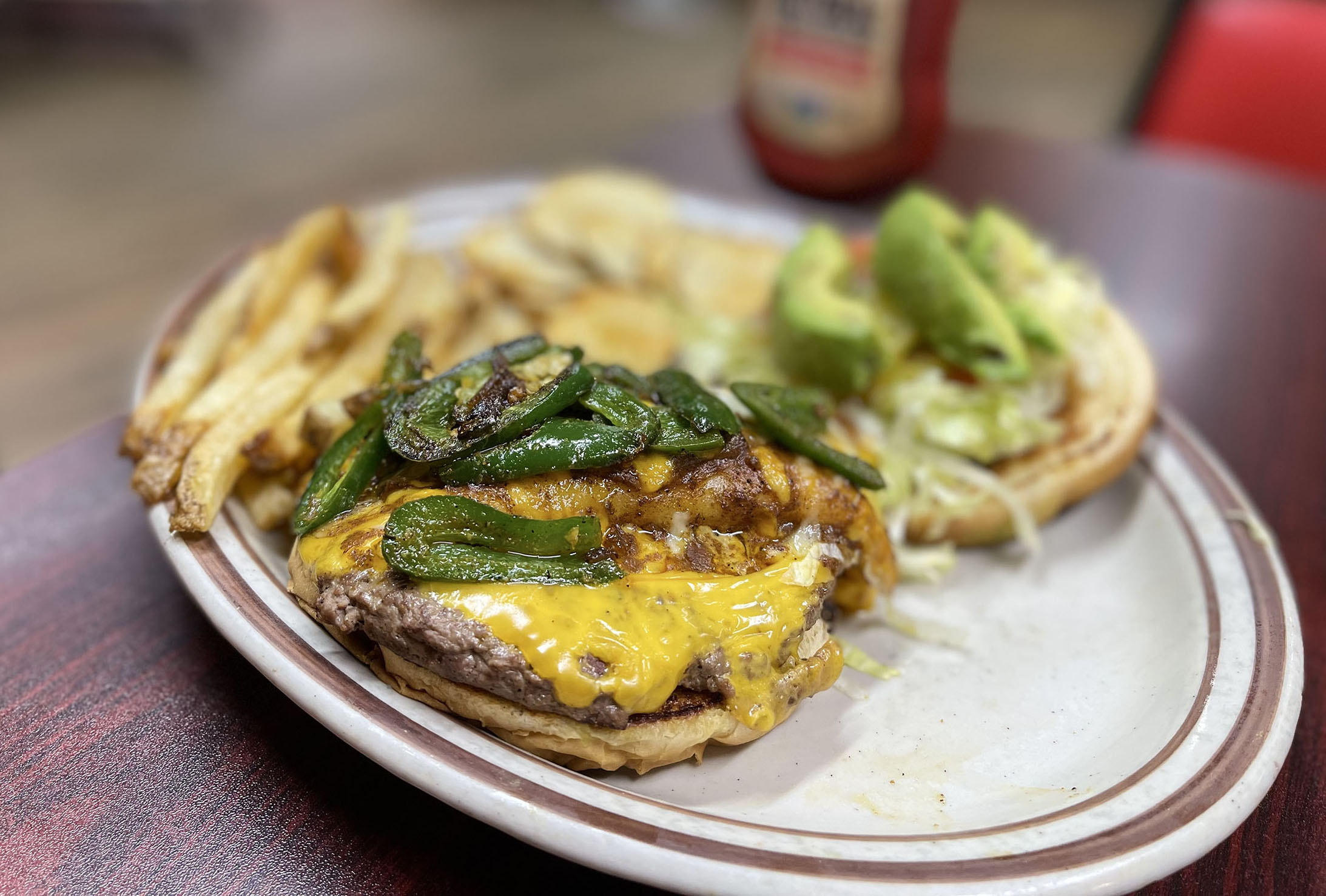 Customers at Hidalgo’s West have the option to order their burger with a cheese enchilada on top.

I recently traveled more than 200 miles, from Austin to San Angelo, as part of my eternal search for great burgers in Texas. San Angelo is a geographic crossroads with a population of 100,000. The Concho River runs through town, which is home to Angelo State University, Goodfellow Air Force Base, and the original M.L. Leddy’s. I was drawn here by a unicorn moment on Facebook, where sincerity and information ruled the day in the form of a tip that a few Mexican restaurants were serving up burgers worth road tripping for.

Burgers from Mexican restaurants have been on my radar lately. If you caught my piece about JewBoy Burgers in Austin, you might remember owner and chef Mo Pittle raving about such burgers from his hometown of El Paso. Over the last few months, multiple sources have confirmed mom and pop Mexican restaurants harbor these sleeper menu items. Armed with multiple recommendations, I set out to eat four burgers in 24 hours and bear witness to the magic of double-toasted buns, the one-two punch of guacamole and jalapeño, and an enchilada moonlighting as a topping. And, of course, seasoning. “The heart of a Mexican restaurant burger is the seasoning,” said Emanuel Villedo, manager of Hidalgo’s West.

But why do so many Mexican restaurants in San Angelo serve burgers? When I asked Diana Mendez, of Mendez Cafe, I learned the answer lies in the spirit of hospitality. “Part of Tex-Mex is having variety,” she said.

I found steak fajitas on the menu right next to steak fingers at Gil’s Restaurant, open since 2002. I didn’t grow up with genuine Tex-Mex, so I’m always asking questions. One question I asked manager Jackie Gonzalez was why they served dishes like steak fingers? “From the get, we had American and Mexican food,” Jackie said. “We want to appeal to everybody. Even if it’s not our specialty, it’s still good.”

Jackie was surprised I journeyed all this way for a burger. But on a menu featuring steak Tampico, “extreme” enchiladas, and fajitas rancheras, the burgers are a popular option. “When I’ve had a long day,” Jackie said, “I want a jalapeño avocado cheeseburger.” 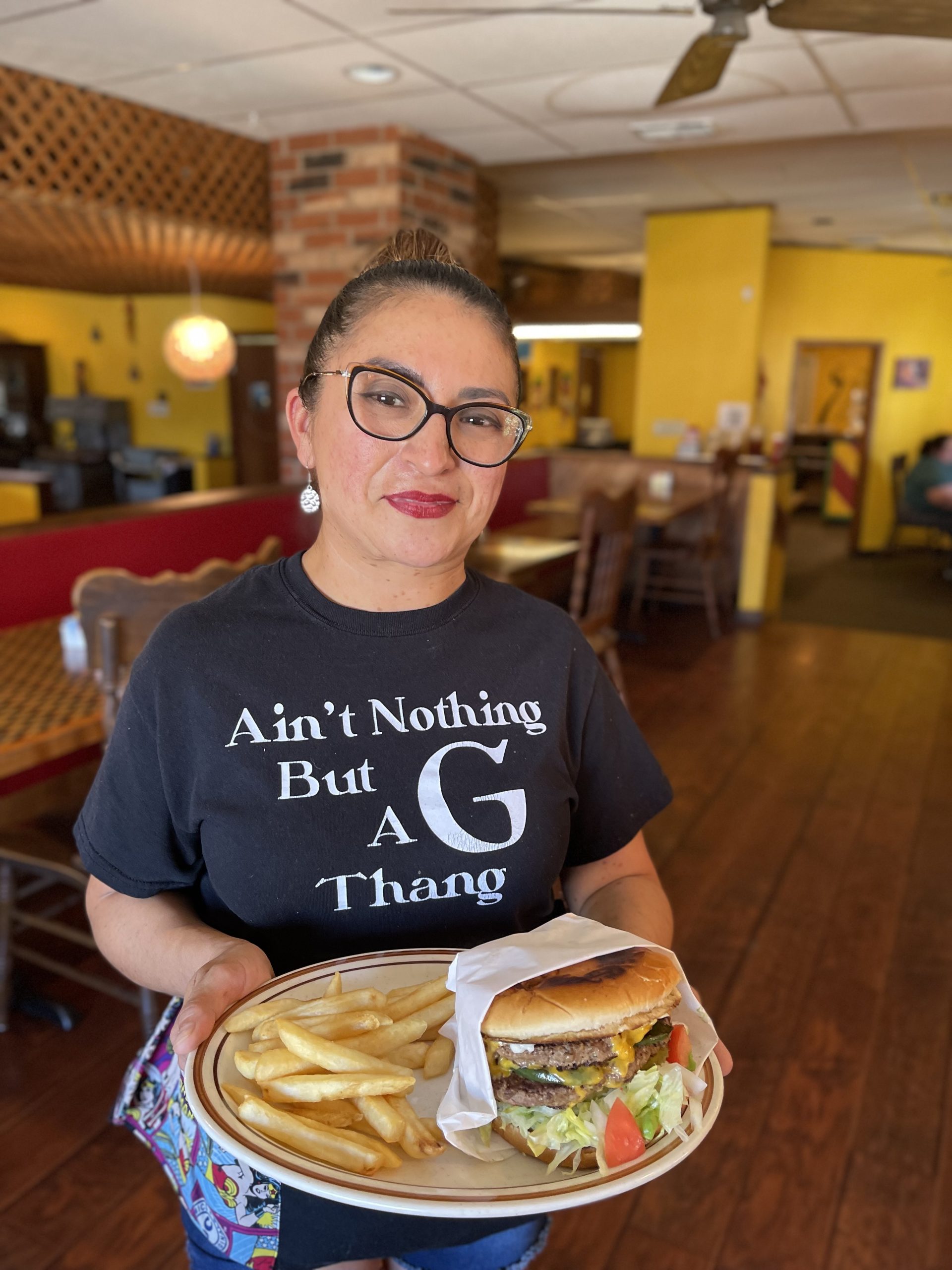 Her answer would become a theme for how I would order all my burgers in San Angelo—always with jalapeño and some form of avocado. It just makes sense as both toppings are foundations for so many Mexican restaurants. And you know the ingredients will be fresh.

I was famished and made mine a double and topped it with grilled jalapeños and guacamole instead. I highly suggest when you get a burger at a Mexican restaurant, let the signature dip shine. The fat of an avocado needs a savory contrast and that’s when a pronounced burger seasoning comes into play. Gil’s uses a mix of Spice Supreme basic seasoning and a bit of Montreal steak seasoning.

While many chefs tout the simplicity of kosher salt and fresh cracked peppercorns as seasoning for their burgers, the savory umami of onion powder, garlic powder, paprika, and a host of other spices creates a Mexican burger bark that I would grow fond of during my San Angelo visit. It reminded me of my dad’s cooking, relying on pre-mixed seasonings like Lawry’s seasoned salt to punch in the flavor. All-purpose seasonings might never be en vogue with chefs, but they have their place. At Gil’s, it’s a heavyweight signature that warrants heavyweight toppings.

Within three hours, I was ready for burger No. 2. Fuentes Cafe is the oldest place I visited. The family restaurant impresses with an upscale feel, and it’s in an area of downtown rife with buildings by local architect Oscar Ruffini, who designed numerous courthouses, schools, residences, and commercial buildings throughout West Texas.

Owner John Fuentes is nearing the end of his tenure, but his daughter Olivia is ready to take the reins. John’s father, Rosendo Fuentes, and his two brothers, Ricardo and Alberto, started the original Fuentes Brothers Cafe in 1948. Then as now, enchiladas and combo plates anchor the menu. I asked John why burgers occupy space alongside so much Mexican fare. “With the younger generation, we want them to feel comfortable,” he said. “One thing my dad said is to treat the kids well because they are your future customers.” 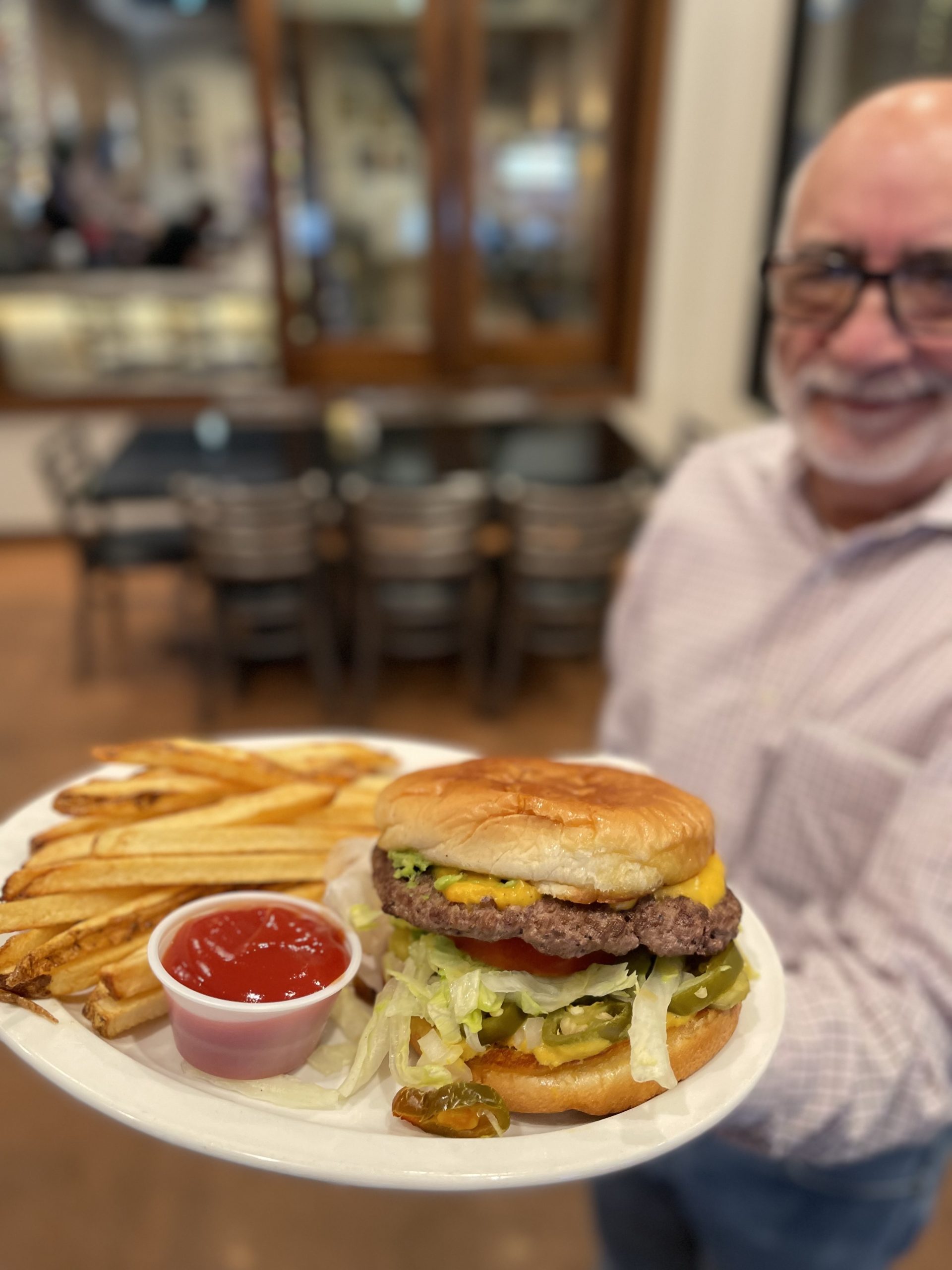 John Fuentes’ father and uncles started the family restaurant in 1948.

The prime ground beef is procured from Western Sky Steakhouse, locally owned by John’s cousin. The burgers are so big, John tells customers to order one and split it for the kids. The 8-9 oz patties are hit with a spice blend from DeCoty Coffee, another San Angelo institution. I ordered mine with avocado and jalapeños, though on John’s advice I chose pickled jalapeños. I love pickles on a burger—acidity and heat make a compelling match.

I can’t say the flavor profile screamed “Mexican restaurant burger” like Gil’s but I have other reasons for returning to Fuentes Cafe. For one, the hand-cut fries are noteworthy. The texture reminded me of Belgian fries, which are fried twice for an exterior that comes out quite crisp while the interior remains soft and buttery. Also, John strikes me as a piece of living history. He told me about the days when San Angelo was the capital of the wool industry. Some of his staff have been here since day one. I guess you can count me as someone who is happy to stay loyal to his namesake cafe.

Hidalgo’s West is an offshoot of Hidalgo’s, which opened in 1991. At one point, there were 10 Hidalgo’s restaurants across West Texas, but now there are three. Incidentally, Hidalgo’s West was initially a burger concept inspired by the popularity of the chain’s Mexican burgers, according to manager Emanuel Villeda. Like everyone I spoke with, Emanuel was born and raised in San Angelo. “People love their burgers here,” he said.

You would think on day two I would slow my roll a bit. But no, I went big at Hidalgo’s West. Emanuel said the burgers are highly customizable, but he champions Los Campeones, a bacon avocado cheeseburger topped with two enchiladas and a fried egg, served open-faced. “A customer came up with this, a body builder,” Emanuel said. “And, if you didn’t know, ‘Los Campeones’ translates to ‘champions.’” 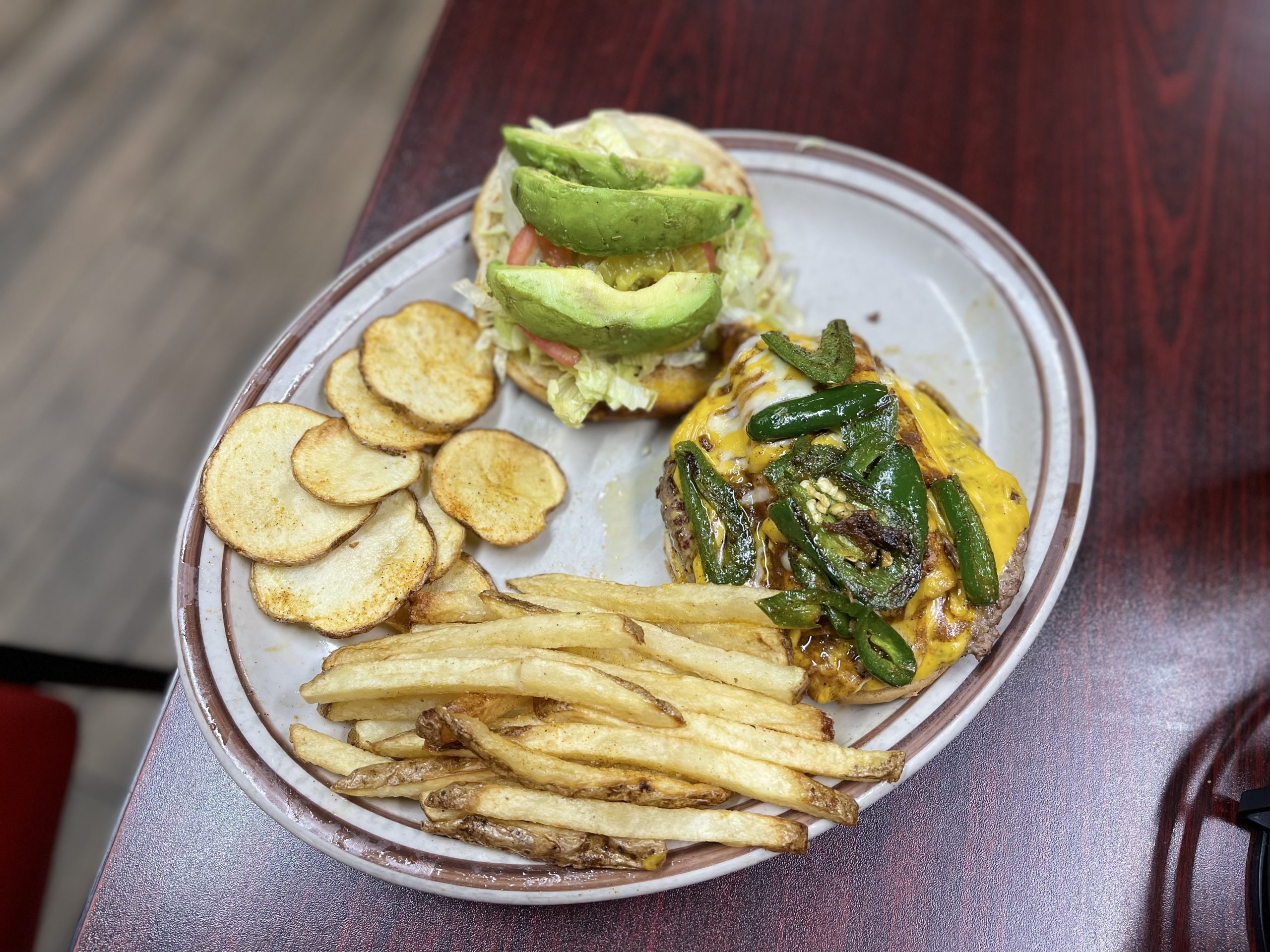 At Hidalgo’s West, they are forming a new holy trinity: avocado, enchilada, and jalapeños.

I asked Emanuel if by adding just a single cheese enchilada he could keep the burger‘s structural integrity intact. He said yes, and I saw a light on the other side. Once before, I had seen such a light: It was the first time I ever tried carne guisada, and that light was my palate bearing witness to the glory of Tex-Mex. A cheese enchilada burger—with grilled jalapeños and avocado, of course—is one of the most memorable burgers I have had in a long time.

As promised, the burger held together though the fat slices of avocado tended to slip out. When you bite into the burger and hit the enchilada, you are washed away in a sea of melted ooey gooey cheesy glory. Having a cheeseburger with an enchilada on top is akin to watching a cheese pull on Instagram for the first time.

My last burger hurrah was at Mendez Cafe, a roadside spot perfectly positioned on the way in or out of town. I spoke with Diana Mendez, whose father, Tomás, started the place. A cook for many years, the native of San Luis Potosí, Mexico, carved out his piece of the American dream with a restaurant of his own in 2011.

The first thing a customer might notice when they walk up to Mendez Cafe is the four-pack burger-and-fry deal for $25.99 painted on the window. The promise of four burgers and four orders of fries for a reasonable price is enticing. I should note all these restaurants offer some legit bang for your buck; every one of my meals, with tax and tip, stayed well under $20. 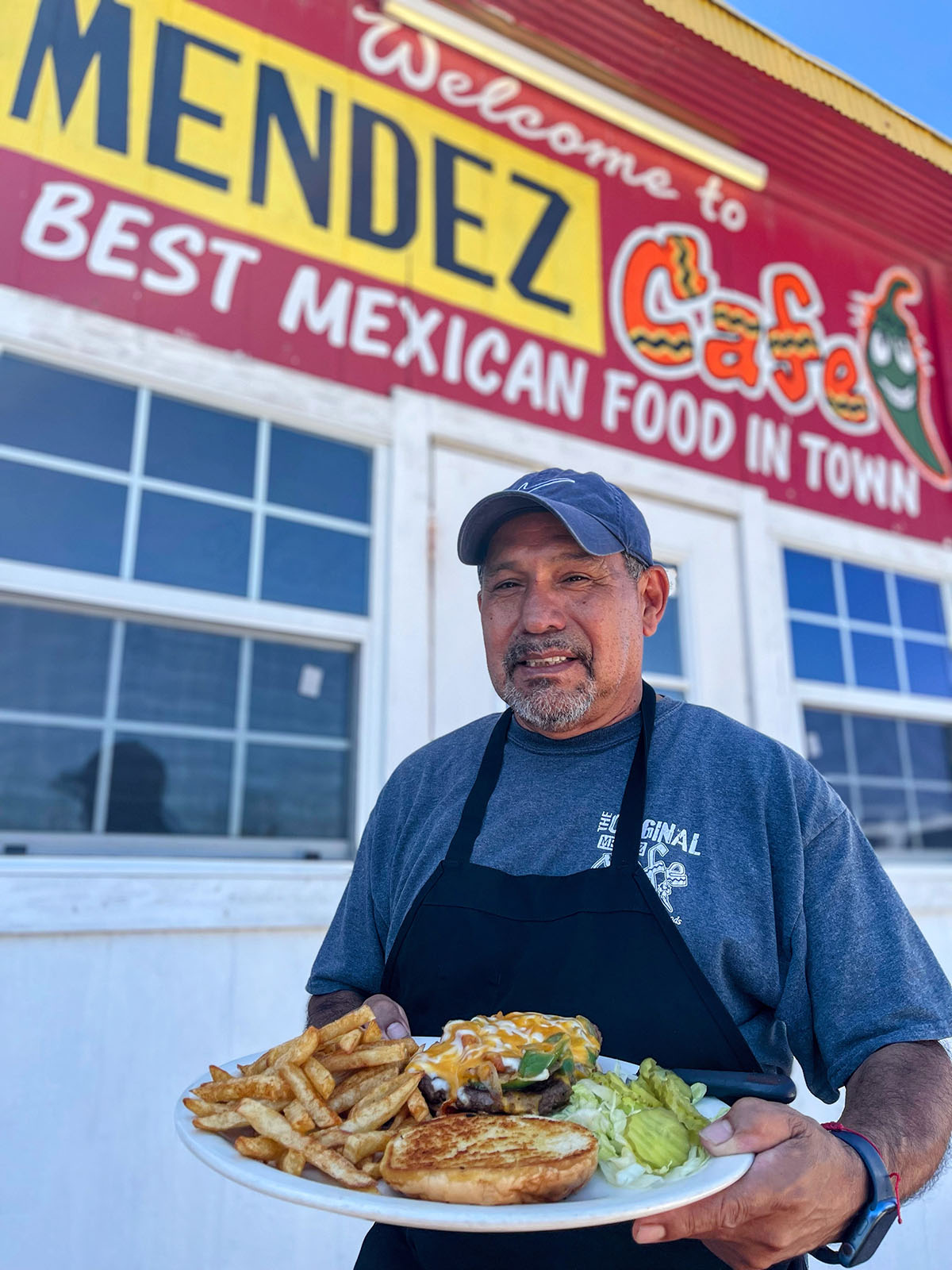 At Mendez Cafe there are two burger options: a basic cheeseburger and the Super Fiesta. But if you have learned anything from this piece, you have really one option: the Super Fiesta. This 8 oz patty is placed on a wide bun and covered in a mix of grilled tomatoes, onions, and serrano peppers; topped with melted cheese; and doused with lemon pepper and all-purpose seasoning. The Super Fiesta burger isn’t just a flavor mingling; it’s a stellar collision. The toppings mirror the ingredients of a charred salsa before blending them together in a molcajete. Real talk: I’m stealing this recipe for my own burger cookery.

In all my conversations with these San Angelo burger purveyors, I asked what makes a Mexican restaurant burger different from the rest. The answer would always dance around the cross-pollination of flavors by virtue of the flattop grill sharing real estate with onions, peppers, and fajita meat. I also noticed that all the restaurants toasted both sides of the bun like a torta roll.

But Diana said it best: Burgers “hit different” at a Mexican restaurant. “The flavor is just stronger here,” she said. “Not just the toppings, but the actual burger.”