The owner of Landrace shares his favorite Mardi Gras tips, dishes, and memories from years spent in the Big Easy 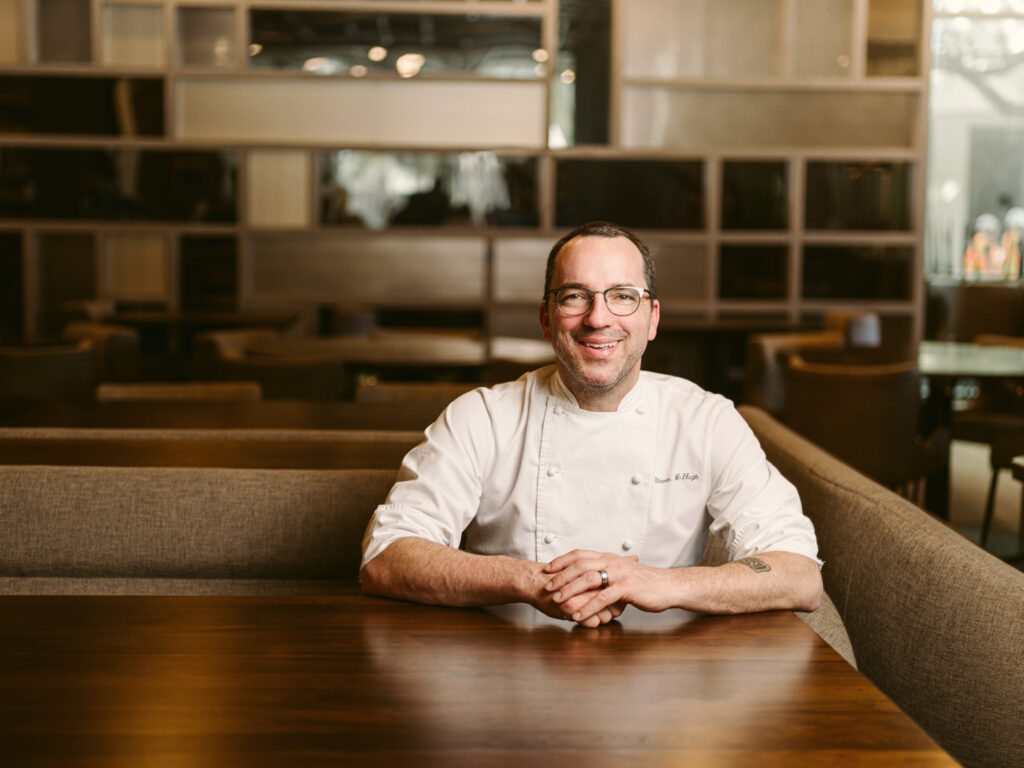 Since moving to San Antonio from New Orleans in 2010, Chef Steve McHugh has been shaking things up in the Texas culinary scene, including being a four-time James Beard Foundation Award finalist for Best Chef: Southwest and a 2020 finalist for Best Chef: Texas. His Pearl District restaurant, Cured, features handcrafted, cured, and fermented foods, and whole-animal butchery, while his newest operation, Landrace, located inside the Thompson San Antonio hotel, serves seasonal options that allow McHugh to take cooking back to its most elemental form with dishes made from Texas ingredients cultivated by local farmers and ranchers.

We spoke with McHugh about how to do Mardi Gras right in Texas, and how his New Orleans-inspired menu reflects his time in The Big Easy.

TH: As a Texas transplant who spent a lot of his professional career in New Orleans kitchens, how does it feel to now be celebrating Mardi Gras in Texas rather than New Orleans?
SM: Obviously, it’s a little bit more subdued, but what’s great about San Antonio is there’s a lot of transplants here. The cities aren’t that far apart, so it’s nothing for my wife and I to take that eight-hour drive or an hour and 45-minute flight and go back. They’re very close, but geographically, they’re very different, and culinarily couldn’t be father apart. [Hurricane] Katrina has left a lot of people here, and there are lots here with ties to Louisiana and New Orleans that I meet every day. I even work with some of them.

What is Mardi Gras?

Mardi Gras kicks off on Three Kings Day (Jan. 6), which is also known as the Epiphany or Twelfth Night. This date marks the end of the Twelve Days of Christmas (and the holiday season). Every year, Mardi Gras season gets underway on this date at sundown in New Orleans and is followed by a weeklong schedule of parades and street parties. The season continues until Fat Tuesday (this year on March 1) and the culmination of Mardi Gras festivities.

TH: Having spent so much time in New Orleans, any advice on how to celebrate Mardi Gras in Texas?
SM: What I loved about New Orleans was that anytime there was a celebration, it was about friends and family. I love to hang out with friends and family during Mardi Gras and be on the parade route. For the food, I think of it as those things that are easily shareable and those items everyone can get involved in in some way. A big pot of red beans is great, or a big ol’ batch of jambalaya, or a crawfish boil. These are the kinds of meals where everyone has a role, whether it’s cooking rice or making cornbread or cutting onions for the beans. It’s those soul-warming meals that make you feel really good, and they do a good job of soaking up alcohol as well.

TH: Speaking of alcohol, do you have any cures for a Mardi Gras hangover?
SM: Obviously drinking water while you drink alcohol is key, which is the one rule I tend to always forget, especially the older I get because those hangovers can last a couple days now. Also, that pot of beans or gumbo that you made the day before for Mardi Gras is going to be even better the next day, so jump right in there and have some to soak up that alcohol. The tradition in New Orleans is to go to Popeye’s and get some fried chicken, red beans, and salty biscuits. Fried chicken goes a long way for a hangover and those biscuits can soak up just about anything.

TH: What are some dishes you could recommend for Texans to make at home for Mardi Gras?
SM: Beans are the best. I always think of them around Mardi Gras because it’s tradition. This time of the year when there’s a chill in the air, there’s nothing better than a pot of beans cooking on the stove for hours, with the sausage and ham hock and all the veggies. Mardi Gras is a long day of hanging out, watching parades, drinking beer, standing outside with the kiddos, and bagging up beads. So, anything that can sit on the stove for hours that you can go back to for more is great.

TH: What are some of your favorite Mardi Gras dishes?
SM: I love pot cooking. I love standing over a stove. I love gumbos, beans, jambalayas, Crawfish Monica, shrimp étouffée. I love those one-pot wonders that warm your soul. I love étouffées. They’re so nuanced, but almost simple in the same token.

TH: For your New Orleans-inspired plates at Landrace this month, are you sourcing any of the ingredients from Louisiana or local Texas farms and ranches?
SM: One of the dishes we’re doing is oysters en brochette, but instead of bacon, we’re using local pork belly, which really works. We’re doing a bone marrow and escargot with maître d’hôtel butter, and the bone marrow is coming from Peeler Ranch. We’re doing a Trout Pontchartrain with Gulf crabmeat on top and a seafood gumbo with Gulf seafood, which is very Mardi Gras.

TH: You didn’t grow up in New Orleans, but what are some of your earliest memories about Mardi Gras?
SM: Well, for one thing, trying to understand it. I grew up in Wisconsin and we had parades, but people weren’t throwing stuff at you during those. So just all of the fighting for beads, the balloons, the awe you have for the festivities. My first apartment I had in New Orleans was on Napoleon Avenue, and there were parades that ran down Napoleon. In particular, I remember Orpheus, which was Harry Connick Jr.’s parade. I remember standing on the front steps, and there’s thousands of people in the streets, and just thinking to myself, “What the hell is going on here?” It’s absolutely insane, but to see an entire city come together is truly amazing.

TH: Do you have any go-to ingredients for recreating New Orleans dishes at home?
SM: Kielbasa makes a great sausage, and you can use that in a good pot of beans. You don’t have to go out and find the best andouille sausage in the world, because it’s hard to find locally. Find something that has a nice, thick grind to it, not too thin, so there’s still a little bit of tooth to it. And something that’s smoked as well, and you’re in good shape there. The other thing, too, that I learned early on, and this might sound weird, but the power of bay leaves in cooking is underrated. Like, I can tell if a pot of beans doesn’t have bay leaves. I look for that flavor, and I don’t think people use them enough. Also, one of the things I really learned how to do in Louisiana was cook with dried herbs and spices. Then I came to Texas and everything is like fresh chilies and fresh herbs. Both cuisines really rely on heat, but in Louisiana it’s really about those dried chilies and dried spices. It’s about the cayenne, paprika, and chili powders. I think having your spice rack with some good dried herbs and spices is important, because it’s hard to recreate a lot of these New Orleans recipes using fresh. Also, don’t be afraid of filé powder, it can make or break a good seafood gumbo. And make sure you aren’t sitting on your dried herbs and spices for years at a time, because they lose their potency.