The allure of the State Fair of Texas—and particularly its renowned foods—extends well beyond the state borders. Some 800 miles west of El Paso, in fact, a production company in Los Angeles became fascinated with the s’mores, butter, lemonade, alligator, pancakes, PB&J, and other imaginative deep-fried delicacies enjoyed at the annual fall festival in Dallas.

Now the whole world can get a taste of these indulgences when Deep Fried Dynasty premieres March 8 at 9 p.m. on A&E.

“We all grew up going to a fair or carnival to eat the best whatever,” says Sallyann Salsano, executive producer of the show and a native of New York. “We heard about the great food at the State Fair of Texas, so we checked it out and fell in love.”

A couple of years ago, Salsano’s LA-based 495 Productions began scouting for the show, casting a wide net in order to come up with the eight vendors to star in a new 13-episode series. The goal was to find intriguing food that’s also delicious, as well as good stories within each of the creators of those wildly inventive snacks.

“It was long process to decide who would be involved,” says Salsano, chatting by phone while on location with one of her other programs, Jersey Shore. “And we found wonderful people who work incredibly hard for the fair’s 24 days. I was impressed with the high quality of the foods. If you’re on a diet, you’ll gain weight watching this show.”

Of the eight showcased, seven are Texas outfits and one comes from Florida. Only one was a fair first-timer (Chef Cassy Jones); many are lifelong veterans, like brothers Juan and Brent Reaves of the Dallas barbecue restaurant Smokey John’s. Their dad, John Reaves, launched the first of the family’s four state fair food booths in 1976, and the boys began selling turkey legs as kids in 1978.

“Our dad was just the second African American vendor at the State Fair of Texas, so it means a lot to make him proud,” says Brent, who joined the family business full-time with big brother Juan in the late 1990s. Juan adds that running the restaurant and four booths at the fair comes with its challenges: “The fair is only 24 days, and it can be a lot of fun, but the work there is way more intense.” 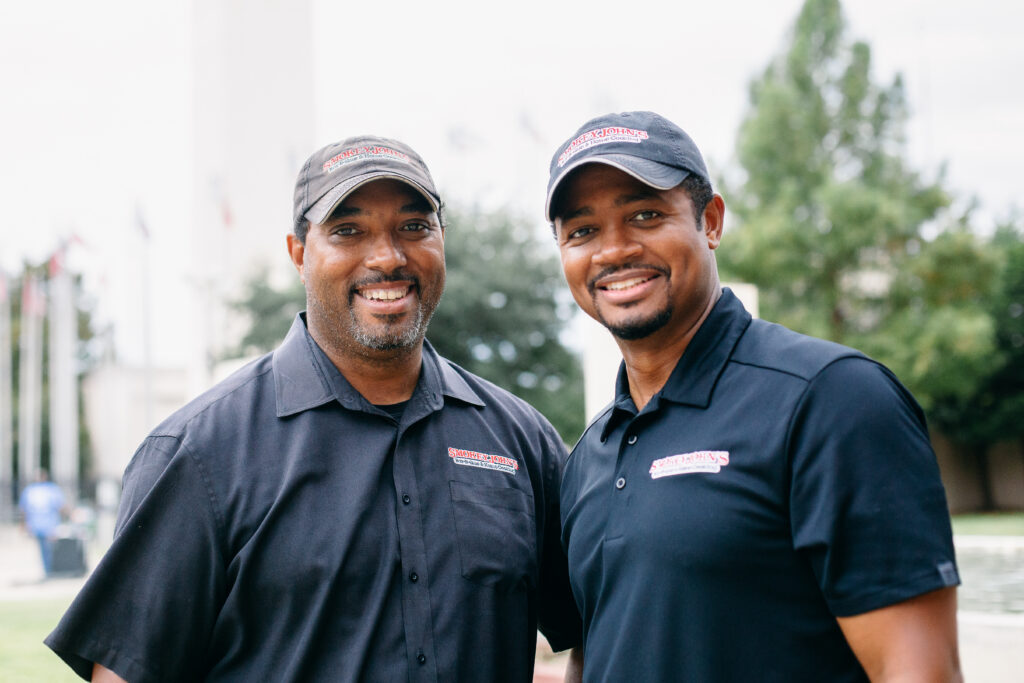 Like several vendors in Deep Fried Dynasty, the brothers grabbed attention with their winning creations for the fair’s Big Tex Choice Awards, bestowed annually on the best-tasting outlandish food creations. In 2021, they were finalists for their Crispy Crazy Corn and Brisket Brittle. In recent years, they’ve made the finals with a deep-fried sweet potato pie and fried tamales topped with chili, and they won in 2016 with fried Jell-O. They’re already working on ideas for the 2022 fair, which takes place Sept. 30-Oct. 23.

The Reaves brothers have been featured in spots on a number of national TV shows, but Deep Fried Dynasty marks the first time in a series. “It was exciting, but walking around with a hot mic on you all day was interesting. Sometimes you forget and say the wrong thing,” Juan says, laughing.

Each episode of the show—filmed throughout the run of the 2021 State Fair—follows the various vendors through their full days, marked with joys and difficulties. Viewers see one vendor jump in to help another when staffing falls short, while another team keeps hungry customers happy when equipment fails, among other things. It’s all done with an upbeat spirit: Audiences find a show about camaraderie, as the vendors share a one-for-all, all-for-one attitude.

“The majority of us are like family,” Brent says.

“Every year, it’s like a little family reunion, and that’s how it was with the show,” adds Juan.

Producer Salsano enthusiastically says that the stories behind the vendors will win viewers’ hearts. She raves about Rick and Tammy Stiffler of Waxahachie, who had their first date at the fair years ago and turned their romance with the fair into a business that sells fried s’mores and fried Snickers.

And, according to Salsano, everyone will fall in love with Jones, a chef from of Mabank, about an hour southeast of Dallas. She’s a relative newcomer whose deep fried soul food “is her second chance at life.”

“It’s a love letter to the State Fair of Texas,” Salsano says. “This show is nothing but a giant hug.”

Deep Fried Dynasty premieres at 9 p.m. on March 8, followed by Episode 2 at 9:30. Episodes are also shown over the following days, with new episodes on Tuesdays. Search A&E’s schedule to find more information about the show and schedule.