Sympathy for the Devil in Southwest Texas

From Devil’s Sinkhole to the Sierra Diablo Mountains, Satan has made quite an impression on parts of Texas 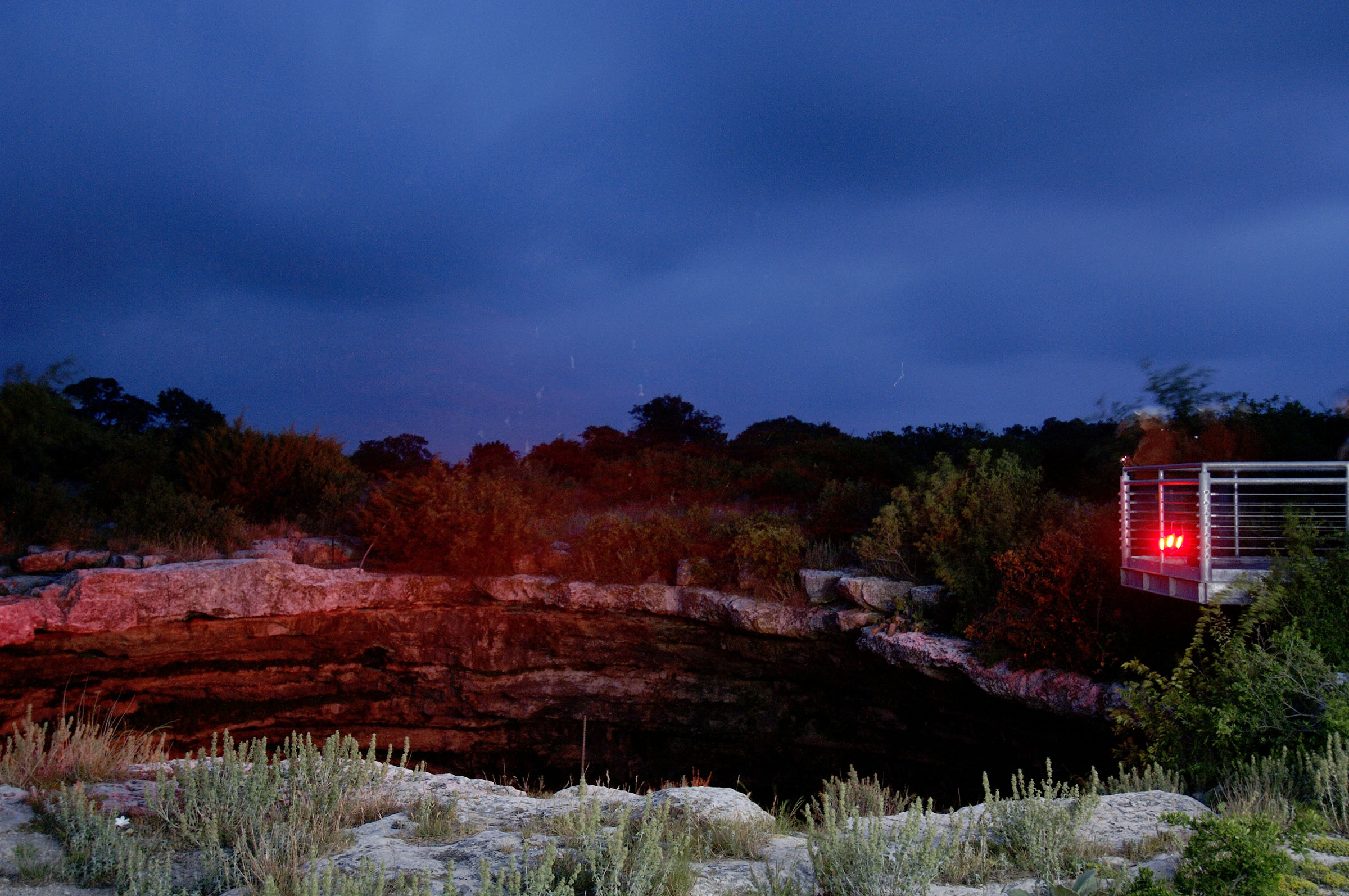 In a world where we are perhaps overly dependent on GPS—focused on getting from point A to point B as quickly and efficiently as possible—I’ve found that simply unfurling a road map and blindly jabbing a finger down on the page just to see what’s there is a surefire way of reopening my mind to the possibilities of exploration and adventure.

Recently, during one of these cartographic pin-the-tail-on-the-donkey sessions, I noticed something curious: The southwest quadrant of Texas is home to an inordinate number of fiendishly named off-the-beaten-path places. In a single region you have Devil’s Sinkhole State Natural Area, Devils River State Natural Area, an area south of Interstate 10 in Hudspeth County known as Devil Ridge, and the Sierra Diablo Mountains.

For all the natural charm of our state, few areas can compete with the Hill Country and the Trans-Pecos, where all four of these destinations lie. Sure, those places are hot in the summer (where in Texas isn’t?), and you could argue that the Trans-Pecos is somewhat inhospitable to humans, but that doesn’t make these places hellscapes. It’s not fair that some of Texas’ most rugged and breathtaking lands get lumped in with the devil and his lot thanks to a few unimaginative monikers. So, how about a little sympathy?

Owing to its uniqueness and beauty, Devil’s Sinkhole State Natural Area is one of only 20 National Natural Landmark sites in Texas. Ranchers who stumbled upon Devil’s Sinkhole in the late 19th century dubbed the place “a helluva hole,” and their wives suggested the alternative name, according to the Texas Speleological Survey. Whatever the origin of its handle, it’s a true Texas treasure and a must-see for caving enthusiasts.

The gaping pit in the Edwards Plateau, located about 70 miles west of Kerrville, is 350 feet deep, with a cavern measuring more than 320 feet in diameter. A 50-foot-wide open shaft beckons visitors to peer down into the nether regions, where millions of Mexican free-tailed bats reside during the summer months. When they clear out in the fall, the bat population is replaced by an equally impressive number of cave swallows. And while visitors aren’t allowed in the cavern itself, evening bat-watching tours are available Wednesdays through Sundays, May 1 through October 31.

I’ll admit it: Maybe bats are a little spooky. But Mexican free-tailed bats eat a whole host of flying pests, including mosquitoes. So, let’s think twice about demonizing the little critters, okay?

The Devils River is one of the finest examples of a primitive and unspoiled waterway in Texas, set against a backdrop of rolling hills and steep canyons. The clear, spring-fed waters are great for swimming and fishing, and the river offers serious paddlers a mix of mellow pools, turbulent rapids, and waterfalls to enjoy.

The Spanish explorer Gaspar Castaño de Sosa first called the river the Laxas, which translates to “slack” or “feeble,” in the year 1590. Sometime after that it was renamed the San Pedro. When Texas Ranger captain John Coffee Hayes saw it some 250 years later, he thought Devils River was more appropriate. This is all according to accounts from the Devils River Conservancy and the Handbook of Texas.

Situated two hours west of Devil’s Sinkhole and an hour and a half north of Del Rio, Devils River State Natural Area is divided into two sections: the Del Norte Unit and the Dan A. Hughes Unit. The Del Norte Unit is open to day visitors and drive-up campers, but you can only reach the Hughes Unit by boat.

Paddling the full length of the Devils River’s navigable waters, from the Del Norte Unit to Lake Amistad, about 48 miles away, takes most folks a minimum of four days. Excursions of this sort require a special permit, and there are zero amenities along the way. Should you decide to make the journey, expect to rough it. Even seasoned backcountry paddlers admit the trip is a devil to plan and execute, but the solitude and setting make it more than worthwhile.

Despite the name given to it in recent centuries, people have been drawn to the Devils River for millennia for its clean water and abundant fish. Some of the earliest inhabitants settled in the area as far back as 13,000 years ago, as Texas Highways editor Matt Joyce recounted in his 2018 story on paddling the Devils River. Traces of those distant cultures are still visible in the dozens of ancient rock shelters found along the river, many adorned with pictographs.

There’s another draw here, too, in addition to the water and the scenery. Devils River State Natural Area holds a Class 2 rating on the Bortle Dark-Sky Scale, ironically making it one of the best places in the state for gazing up at the heavens.

South of Interstate 10, near the town of Sierra Blanca, travelers will find a 105-square-mile area of rocky, remote, and arid land called Devil Ridge. At the northwest end of the ridgeline is Yucca Mesa, the highest point at 5,300 feet. In the Chihuahuan Desert flats below the ridge’s southeast end lie dusty remnants of the old Butterfield Overland Mail route, which cut through nearby Quitman Canyon on its way to El Paso.

If you’re looking for a connection to the underworld, geologists have determined that Devil Ridge was once part of a Cretaceous Period seabed. That sea, along with the dinosaurs, was wiped out by either a giant asteroid or a massive volcano, though scientific opinion on the matter is split.

The ridge is now private land, accessible only to ranchers and the few climbers who venture into these parts in search of heights to conquer. But passersby on the interstate can still enjoy a glimpse of this wild country while driving between Sierra Blanca and Van Horn.

Not far from Devil Ridge, on the Hudspeth-Culberson county line, are the Sierra Diablo Mountains, a range of rocky peaks and plateaus towering over the lonely desert.

The range has gotten a dose of publicity in recent years thanks to Amazon founder Jeff Bezos, who owns land in the area on which he built his Blue Origin spacecraft launch site. He has also teamed up with computer scientist and MIT professor Danny Hillis to construct a 500-foot clock inside one of the Sierra Diablo’s mountains, which once operational will tell time for 10,000 years. As of this writing, the clock is still a long way from being completed, but there’s still a lot to love about this timeless section of Texas highlands.

As far as public land goes, there is the Sierra Diablo Wildlife Management Area, overseen by Texas Parks and Wildlife. This scarcely visited area was created in 1945 as a refuge for desert bighorn sheep. Decades later, it’s still home to the largest free-range bighorn sheep population in Texas, in addition to a healthy number of mule deer.

To protect their habitat, access to the Sierra Diablo WMA is limited, mostly to educational and other special-interest groups, as well as a small number of hunters each year. Given the exclusivity, just passing through those gates can feel like winning the lottery.

As is the case with Devil Ridge, the land out here possesses a stark beauty. Is it intimidating? Yes, though not in any evil sense of the word. It’s only scary because the vastness—that wide horizon and that high sky—makes a person feel insignificant. It’s the kind of beauty that humbles.