The historic spring-fed swimming pool, built in the 1930s, has undergone major repairs in recent years

Written by Sarah Thurmond | Updated: June 24, 2021 | Filed Under: On the WaterThings to DoTravel News 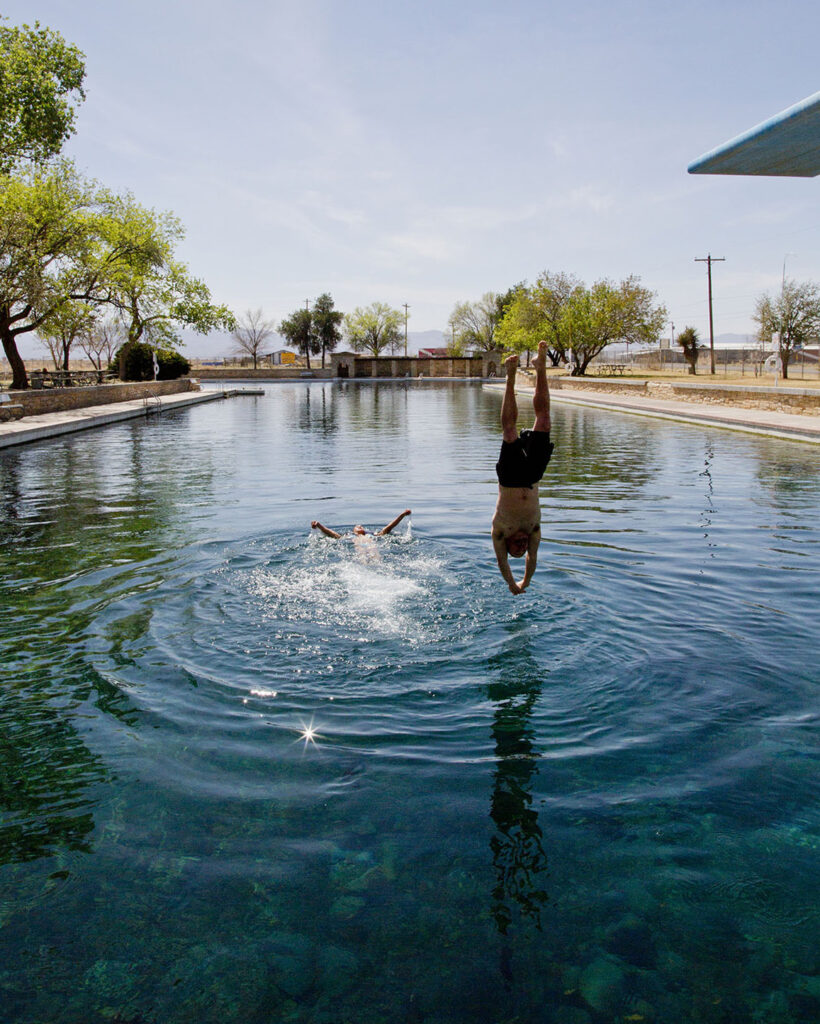 I remember the first time, and the second time, and close to the 100th time I’ve visited Balmorhea State Park for a swim. It’s all about the sprawling pool built around San Solomon Springs. Gushing 15 million gallons of crystal-clear water a day from deep underground, the springs feed a community and surrounding farmers while drawing people like me from around the world to swim in its waters.

Maybe the best time I visited was about 15 years ago. It was the day after Labor Day, meaning summer had officially ended. I drove west from Central Texas, hitting the park and the pool at 4 p.m. I paid my fee, grabbed my goggles and towels, walked the sidewalk to the steps at the end, and dove in, heading for the electric blue springs. I had the whole pool to myself. By the time I was done, I was joined by the artist Boyd Elder who had driven over from Valentine. We retired to La Cueva de Oso cafe (aka The Bear Den) in Balmorhea, to eat flat green enchiladas and drink Mexican beers on the patio while watching the sunset.

Beginning Saturday, after two extended closures for infrastructure repairs, the storied pool near the Far West Texas town of Balmorhea, within eyeshot of Interstate 10, is welcoming swimmers again. And the state park’s staff is as excited as the guests, reports superintendent Carolyn Rose.

“There was an immediate increase in staff energy and morale when we learned of the reopening date,” Rose says. “We have missed interacting with visitors and experiencing the joy and excitement they feel when they encounter the pool and especially when they take that first plunge.”

Even when it’s crowded, which is pretty much every weekend from Easter until Labor Day, the pool is a delight. Spread over 2 1/2 acres, it’s large enough to accommodate hundreds of swimmers, floaters, and sunbathers, and dozens of scuba divers, everyone doing their own thing in the cool, clear water.

It’s been called the world’s largest spring-fed pool, but that’s debatable, so I would simply contend that Balmorhea is the best pool in the world. With the temperature of the water a constant 72-78 degrees and startling underwater visibility, it’s a literal oasis in the desert, making for a natural, chlorine-free experience that leaves all cement ponds in the dust.

Seizing an opportunity to build a pool around the San Solomon Springs, the largest complex of springs in West Texas, the Civilian Conservation Corps started construction in the 1930s. The corps’ nearby works include the Indian Lodge at Davis Mountains State Park and the cabins in the Chisos Basin of Big Bend National Park.

Unfortunately, decades of deferred maintenance within the entire state park system led to serious structural issues around the pool. It first closed on May 10, 2018, when the concrete apron under the diving boards collapsed, but reopened on March 1, 2019.

Six months later, the pool closed again on Sept. 3, 2019, along with the day-use area of the park, when more structural deficiencies were discovered. The existing septic system was removed and replaced, new fencing around the pool was installed, the historic pergola near the high diving platform was reconstructed, and the historic combination building and the water release gate were repaired.

Pool repairs have coincided with the restoration of the original adobe structures at adjacent San Solomon Springs Court. That rehab project started in 2017 but stalled after contractor issues. Although a completion date has yet to be set, the court, the RV camping loop, and maintenance/laundry facilities remain closed while being renovated.

What’s changed about Balmorhea pool? Online reservations for entrance, for starters. Since the COVID-19 pandemic, many Texas state parks have consistently filled to capacity, and Balmorhea is expected to experience capacity crowds on weekends and many weekdays at least through mid-September. Summer is when most of the guests visit—163,000 in 2016, the last count before disruptions closed the pool. This year should be no different. Showing up without making advance reservations is not recommended. But waiting until the day after Labor Day has its benefits.

The pool looks the same as it ever was, save for some minor details. Space within the pool area will be reduced slightly until all fence work is complete. Several gates need to be installed and some minor masonry work on the fence remains. Visitors will be separated from the fence by temporary orange construction fencing.

What hasn’t changed is the guarantee of cool, clear water that provides some respite from the torrid Texas heat in summer months, and a refreshing, otherworldly swimming experience year-round, like nowhere else.

Balmorhea pool reopens June 26, with admission $7 for adults and free for children under 12.