From the 1920s to the ’60s, the Dallas convenience store chain made its name delivering good to customers’ cars. During COVID-19, the antiquated service has made a major comeback. 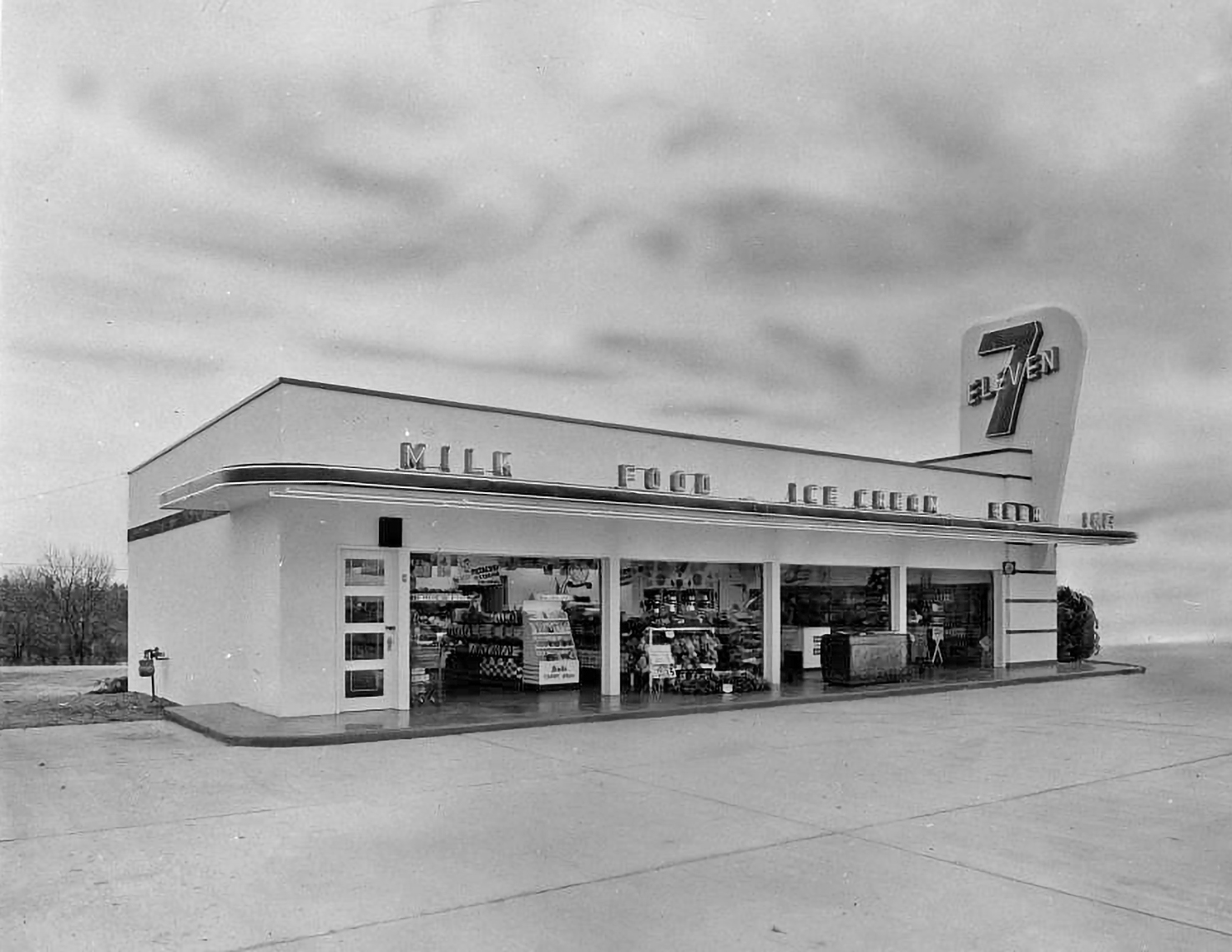 A 7-Eleven in Fort Worth in 1952. Photo taken by W.D. Smith, courtesy of the Portal to Texas History.

Curbside service has been the saving grace for many restaurants and retailers struggling to survive during COVID-19. If customers can’t come into a business without risking infection, employees can safely deliver the goods to a customer’s car.

What seems like a creative stopgap is really a reboot of a service that put 7-Eleven, founded in Dallas in 1927, on the map. A little less than century ago, you could pick up milk, eggs, beer, ice cream, and ice from 7-Eleven without ever leaving your car.

7-Eleven started out as the Southland Ice Company. Before air-conditioning civilized Texas, ice was the only means of refrigeration available to consumers. Ice houses, ice docks, and ice plants were critical businesses. Back then, grocery stores closed by 6 p.m., but ice docks operated 16 hours a day and were pretty much the only businesses open on Sundays.

Southland Ice Company director Joe C. “Jodie” Thompson, a University of Texas graduate, oversaw eight ice plants and 21 ice docks around Dallas. One of his ice docks, in Dallas’ Oak Cliff neighborhood, had started to also sell milk, bread, and eggs, at the request of customers. This allowed the ice dock, which typically closed in winter, to remain open throughout the year.

Inspired by this idea, Thompson decided to open storefronts at all Southland locations. The idea of a quick alternative to the grocery store led to more Southland stores opening throughout the state. Increasingly, storefronts opened in standalone locations, unattached to ice operations. Most of the Southland’s convenience stores were called Tote’Ms. From the start, one feature the business apart: curbside service.

You would drive your car up to the curb in front, honk the horn or blink the lights, and a man in uniform came out to take your order. He would go back inside, gather your goods, and deliver them to your car.

An advertisement in the March 21, 1931 edition of the Fort Worth Star-Telegram noted seven Tote’Ms were open, with more to come. The ad read: “You never leave your car when trading at a Tote’M Ice Store… You drive in, give your order for ice, eggs, butter, milk, cheese, cold drinks, or a hundred other products and you are quickly served while you remain behind the steering wheel.”

By 1936, Tote’Ms had become so ubiquitous, they were the No. 1 dairy retailer in Dallas, spurring the company to develop Oak Farms Dairy. Store profits were outpacing earnings from the ice business by a wide margin.

While most Southland-owned stores were named Tote’Ms, some operated under the names City Ice or Southland Ice. On January 1, 1946, all the stores were united under a single name, 7-Eleven, which underscored the extended operating hours.

Curbside service at some 7-Elevens persisted into the early 1960s. But as the inventory—in size and selection— grew, it became more efficient for customers to come inside and choose the items themselves. Self-service became the new convenience.

The amenity of curbside service, once a symbol of the triumph of automobile culture, was considered too cumbersome and too expensive, requiring too much employee labor to deliver the goods. Unfortunately, the human touch was also lost when curbside service ended. People made friends with the folks who came out to take their order. Sometimes, the service led to romance. (It’s how the parents of Jimmie and Stevie Ray Vaughan, Martha Cook and Big Jim Vaughan, met.)

Now, the discarded customer convenience has become the prototype of pandemic retailing. (While 7-Eleven doesn’t offer curbside service during the COVID-19 pandemic, there is a mobile app that will bring goods to your door.) In some ways, curbside service is less efficient and more labor intensive, which means less profit. But it works. Under the present circumstances, this old idea will do just fine. We are already a car-based culture, well-acquainted with the drive-thru.

The return of curbside service comes with the fact that it may be the only social encounter of the day outside the house—a brief face-to-face, masked social interaction. “Is that a smile under that mask? You doing OK? Hang in there. Appreciate it. Thank you.”

Curbside service was how Texans used to go to the store, and it’s how we’re going to the store again. That simple transaction could lead to something interesting—a conversation, maybe something more. In times like these, curbside service at retail locations may be enough to get us through some tough times. I’m glad we invented it.